Historical Background
“Here he had heard that Fulvius was laden with booty and had, from easy successes, become careless of his discipline. Knowing the impatient character of Fulvius, and hearing also that his troops were overeager to fight and probably in poor condition for battle, Hannibal choose his camp where a good battlefield lay before him, and preparing during the night an ambuscade of three thousand foot in some farmyards near by, he sent Mago and some two thousand Numidians to occupy all the roads in the rear of the enemy. Fulvius, who had promised his impatient men to fight the next day, accepted the gage of battle so soon as Hannibal had drawn up in front of his camp, and moved to the attack.”

“Hannibal was superior in numbers as well as skill. Fulvius, in order to make his front equal Hannibal’s, decreased his depth against the protests of the tribunes and, mixing his cohorts of the Roman and allied legions in one line, drew up with his horse on either flank, and covered by his light troops.”

“Hannibal formed as usual in phalangial order, sixteen deep, cavalry on the wings, skirmishers in front. The Roman line scarcely stood the first shock. Fulvius, less daring in deed than in threat, fled from the field at the earliest sign of disaster. His legions, taken in front and flank and rear by Hannibal’s phalangites and Numidian horse were absolutely destroyed. Scarce two thousand men were able to make their escape from the sword of the Carthaginians. “

“Thus, in a few weeks, the Romans had lost three armies as well as any standing they had gained in southern Italy. Hannibal, despite his success, felt constrained to return again to Tarentum, and here he remained during the rest of the year…” 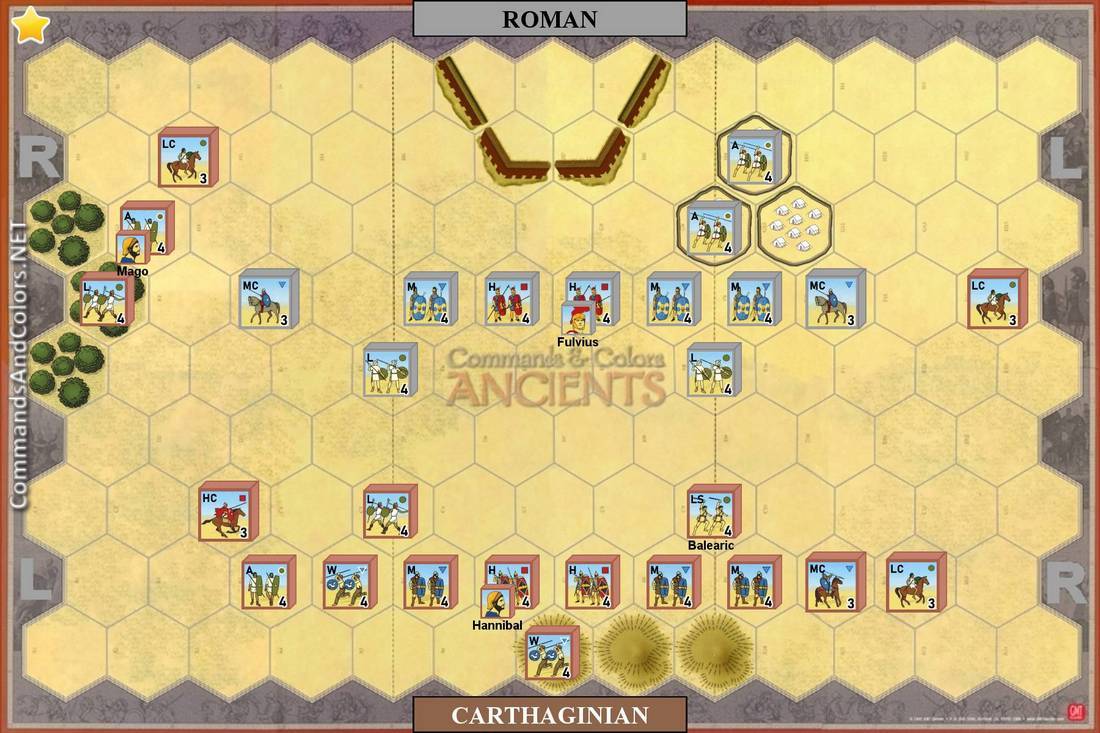 Special Rules
Command Rules:
A Leader attached (stacked with) a friendly unit may cancel one sword hit on the unit in lieu of canceling a retreat hit.
Hannibal may cancel both a sword and a retreat hit if stacked with a friendly unit.
A unit involved in close combat with the support of a Leader may only count one helmet hit amongst those rolled to inflict a hit on an opposing unit.

Balearic Slingers: The Carthaginian Light Slingers are elite Balearic mercenaries, when firing their missiles at Roman Light (Green) units they hit on swords—in battle back only they also hit on swords regardless of the type of opposing unit.

Walls of Herdonia: hexes I6, H6, H7, I8 represent the walls of Herdonia, the local South Italian city that Fulvius was besieging before the battle. Both sides may not enter these hexes. (Its doubtful the locals would have allowed Hannibal’s mercenaries inside anyway during a fierce battle and Fulvius probably had siege lines about the place)

Numidian Cavalry: In lieu of evading towards their map edge Carthaginian Light Cavalry may evade in any direction, however if they opt for the “any direction” option the path of their evasion may not pass adjacent to Roman units. Carthaginian Light Cavalry also only retreat two hexes per Flag result taken or inflicted-they retreat normally towards their own baseline in Row “A”.