Historical Background
“Nero now joined his forces to those brought by Hostilius, which made an army of forty thousand foot and twenty-five hundred horse. His headquarters he established in Venusia, and his main object was to prevent Hannibal from marching north to join the new army (of his brother Hasdrubal from Spain)…..Hannibal found it necessary to retire to Bruttium. His recent losses were directly traceable to Hasdrubal’s delay.”

“In Bruttium, Hannibal reinforced himself with all the garrisons he could spare, and moved along the great road from Rhegium on Grumentum in Lucania, intending once more to reach out to Hasdrubal, and hoping on the way to capture Grumentum, which had been one of those towns which through fear had surrendered to the Romans. He camped near the city….At the same time Nero…moved from Venusia on Grumentum and occupied a camp about a mile from Hannibal’s. He was soldier enough to know that Hannibal did not want to fight, and to be anxious to force a battle on him if it could be done on advantageous terms.”

“The Carthaginian rampart was only five hundred paces from the city walls. Between the camps the ground was level. Hannibal lay with the town at his rear, the Aciris (river) on his right, Nero facing him , the Aciris on his left. On Hannibal’s left were several naked hills, not at all fitted for an ambuscade and unsuspected by either party. Hannibal had probably grown to believe that ambuscades were of no further use and that the consul would be on his guard against them; but if the account in Livy is accurate, he paid no heed to the operations on his own flanks. On the open plain were daily skirmishes between the outposts and light troops. Nero kept close in camp, as if intent only on barring Hannibal from a march northward to join Hasdrubal. Hannibal, however anxious to get away, fearing that he could not well advance or retire without a battle, drew up daily in order and awaited Nero’s attack. He understood the character of his opponent well, but thought that if he could get Nero to make a direct attack he could beat him.”

“Nero was unwilling to run the risk, but concluded to try upon Hannibal one of his own stratagems. He managed to send, under the command of Tiberius Claudius Asellus, a tribune…by night and unperceived, five cohorts and five maniples, to the rear of hills on Hannibal’s left, with orders to debouch from cover at a set time.”

“Next morning both parties made ready for battle, Hannibal giving the earlier orders, and the armies filed out from camp and deployed into line. Hannibal’s hastily raised levies had not been fully subjected to careful discipline, and the deployment was irregularly made on the Carthaginian side….Nero at once took advantage of this confusion (in the lines) to make a sharp and unexpected attack on Hannibal’s light troops with his cavalry.
Hannibal’s presence, however, began to restore order; the Roman right wing was coming steadily into action, and the battle was fully engaged before any regular formation had been completed on either hand. The Romans were under better discipline and had the advantage of the initiative. The Carthaginians showed no demoralization and resisted the spirited Roman assaults with great determination. ‘Hannibal among the terror and confusion would have drawn up his troops while fighting, which would not have been an easy task unless to a veteran general with veteran troops,” says Livy, and the Carthaginian lines were pretty well holding their own, as fresh detachments were hurried up to fill the gaps. Hannibal was busily occupied in restoring order and with considerable success, when the Roman detachment, which had been send round back of the hills, debouched with a war-cry on the Carthaginian left flank. Hannibal’s men were at once seized with fear lest they should be cut off from camp, and made a speedy and disorganized retreat to its protection. Nero pushed his cavalry upon their rear. Had not the camp been near at hand a second Cannae might have occurred, claims the Roman historian. The retreat was not without eight thousand killed, seven hundred captured, and the loss of nine ensigns and six elephants. The consul limited his casualties to five hundred men, Roman and allies. The event proved the result of this so-called victory to be more like that of a drawn battle…..”

“Next day Nero again offered battle, but Hannibal was not strong enough to engage. Nero, according to Livy, buried the dead, -a token of victory,- and harassed Hannibal as much as he could with his cavalry, and by daily advancing to the very ramparts of Hannibal’s camp, “so near to the gates that he almost appeared to be carrying in his standards”.

“Hannibal felt compelled to withdraw. This he did in the third watch of the night, by leaving his camp-fires lighted, and the fore-most rows of tents standing, with a few Numidian sentries left behind….He marched straight for Apulia….” 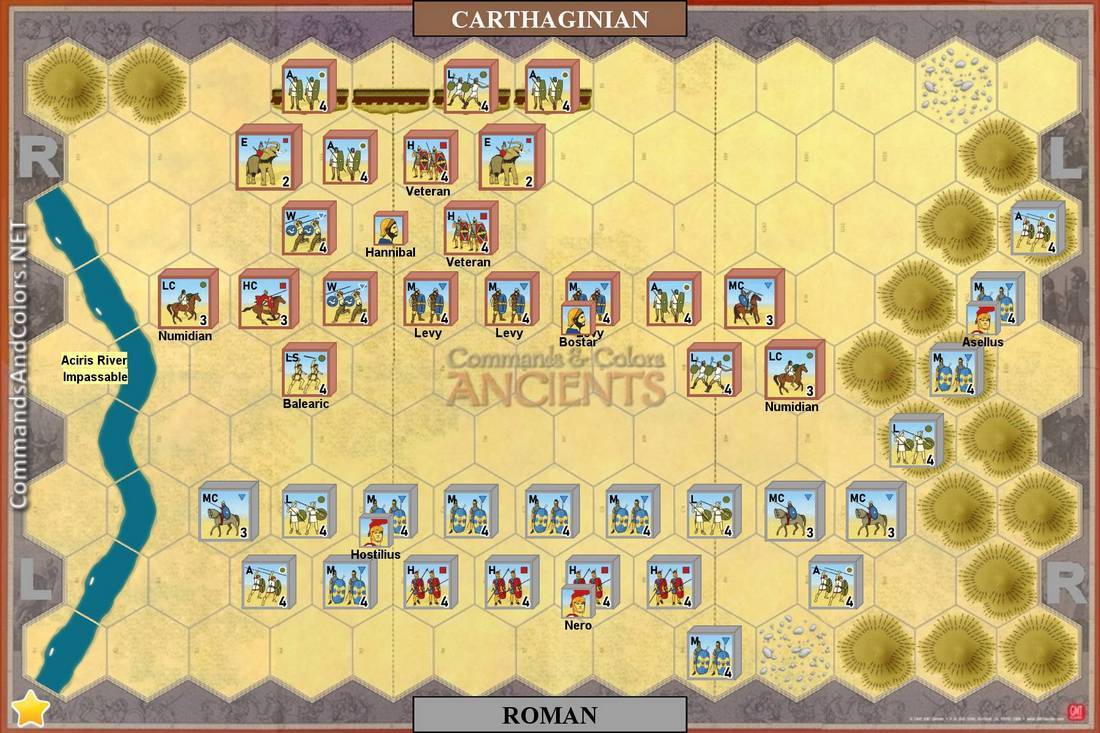 Special Rules
Command Rules: A Leader attached (stacked with) a friendly unit may cancel one sword hit on the unit in lieu of canceling a retreat hit. Hannibal may cancel both a sword and a retreat hit if stacked with a friendly unit.
A unit involved in close combat with the support of a Leader may only count one helmet hit amongst those rolled to inflict a hit on an opposing unit unless Hannibal is the supporting Leader then up to two helmet hits can be counted per combat roll.

Numidian Cavalry: Carthaginian Light Cavalry only retreat two hexes per Flag result taken or inflicted—in battle back only they also hit on swords regardless of opponent.

Hannibal’s Old Veterans: The two Carthaginian Heavy Infantry units represent Hannibal’s old veterans—the survivors, the hard-bitten mercenary warrior elite of up to a decade and more of bloody battles in Italy. In close-combat whether attacking or defending these units always ignore the first sword hit inflicted upon them.

Release of Asellus’s Roman Outflanking Force: The three units and one leader of  Asellus’s Roman Outflanking Force may not be ordered by the Roman Player unless they have been “released” via a card play in the scenario. At the start of any Roman Player turn after the very first Roman Player-turn the Roman player may elect to play a card, either an order 3 or 4 units card in the right section or any Leadership card to release Asellus’s force. The release card play is done in lieu of a normal Roman player-turn card play. On the player-turn of the release the three units of Asellus’s force may move up to two hexes and proceed to close-combat battle at +1 dice or missile fire at +1 dice. Asellus, of course, tags along with the unit he is attached to during the initial release move.