Historical Background:
“Mago advanced into cisapline Gaul as far as the territory of the Insubrians. The Proconsul M. Cornelius and the praetor Quinctiliius with four legions moved to oppose him. It would have been perhaps wiser of Mago to avoid battle, and make his push southwards to join fortunes with his brother. But he chose to fight and displayed all the family skill and courage. The Roman cavalry was defeated by Mago’s elephants and the legions thrown into confusion. Victory appeared certain for Mago. But a Roman troop bravely attacked the elephants, which as usual, wheeled around on their friends and turned the tide. Serious wounds prevented Mago’s personal efforts to retrieve the disaster.
The loss of the Carthaginians was five thousand; of the Romans twenty-three hundred killed, figures that show heavy fighting. Among the Romans were three military tribunes, twenty-two distinguished knights, and several centurions. The relics of the Carthaginian army retired to the coast. But a small portion of his forces reached Africa, for which place they had sailed on receiving the senate’s orders to return. Mago died on the voyage home.” (The above was from T.A. Dodge’s 1891 masterwork Hannibal p.592) 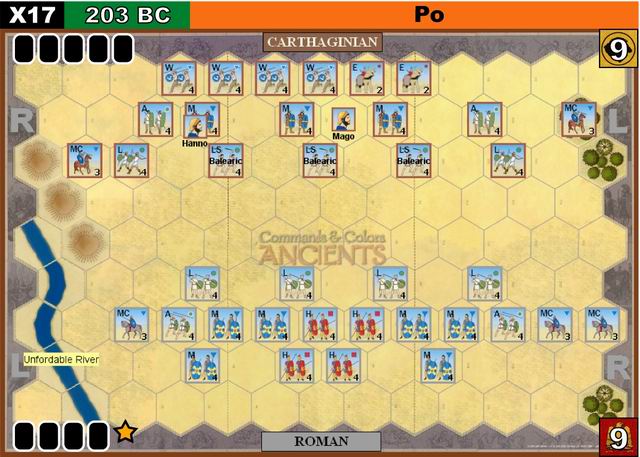 Victory:
9 Banners—but Romans get 2 Banners if they eliminate Mago, and the first eliminated Roman light infantry unit does not count for Carthaginian victory.

1) Balearic Slingers: The Carthaginian Light Slingers are elite Balearic mercenaries, when firing their missiles at Roman Light (Green) units they hit on swords—in battle back they also hit on swords.

3) Leader Command Rules: A Leader attached (stacked with) a friendly unit may cancel one sword hit on the unit in lieu of canceling a retreat hit. Mago can cancel both a retreat and a sword hit if present A unit involved in close combat with the support of a Leader may only count one helmet hit amongst those rolled to inflict a hit on an opposing unit.

4) Outflanking---This is an easy way of introducing facing and flanks to the game with little fuss—it can be retrofitted to other scenarios where appropriate:
A unit is said to be “Outflanked” if it is surrounded in all six adjacent hexes by either enemy units, or hexes adjacent to an enemy unit. The presence of friendly units does not negate an “Outflanked” situation in any way. Units on the board edges (and not surrounded by six adjacent hexes) cannot be “Outflanked”.
Effects of being Outflanked: “Outflanked” units when battling back roll only half the normal number of dice they would be normally entitled to rounded up—to a maximum of only two dice—“Outflanked” units when battling back never hit on helmet rolls even if supported by a leader. A unit’s “Outflanked” situation is judged at the instant it battles back.