Historical Background
Following Scipio’s victory at Ilipa in 206 Mago once again sailed to the Balearic Isles to recruit mercenaries. Then, rather than fall back to Africa, as everyone expected, Mago launched the third Barcid invasion of Italy. With new levies from Africa, Mago sailed across the Mediterrean and landed at Genoa in 205. After receiving reinforcements, Mago invaded the valley of the Po River in 203. He now had 18,000 infantry, 2,800 cavalry and seven elephants from Africa; and about 15,000 foot and 1,500 horse from the Ligurian and Gallic tribes. Two Roman armies were on hand in Cisalpine Gaul under the Praetor Oublius Quintilius Varus and the Proconsul Marcus Cornelius Cethegus. Their army included four double legions, with 40,000 infantry and 3,000 cavalry. The battle was joined in the plain along the Po River. Mago placed his reliable African and Ligurian infantry in his main battle line, with his Gauls in the reserve. As the battle began, Mago’s main line clashed with the front line legions and Carthaginians had the advantage. Them Varus led a cavalry charge towards the Cartaginian’s open flank. This was the moment Mago awaited-he counter-charged with his elephants. The Roman cavalry broke before the impact of the lumbering behemots. As the Romans flank faltered, Cethegus moved up the reserves. As these fresh troops began to turn the tide in Rome’s favor, Mago responded with his Gallic warriors. Just then Mago fell with a serious wound, and his beleaguered army finally broke. It had been a very bloody fight. Over 5,000 Carthaginians and 2,300 Romans were left on the field. Mago perished of his wound while sailing for Africa, but the remnants of his army returned to fight at Zama.
The stage is set. The battle lines are drawn and you are in command. Can you change history? 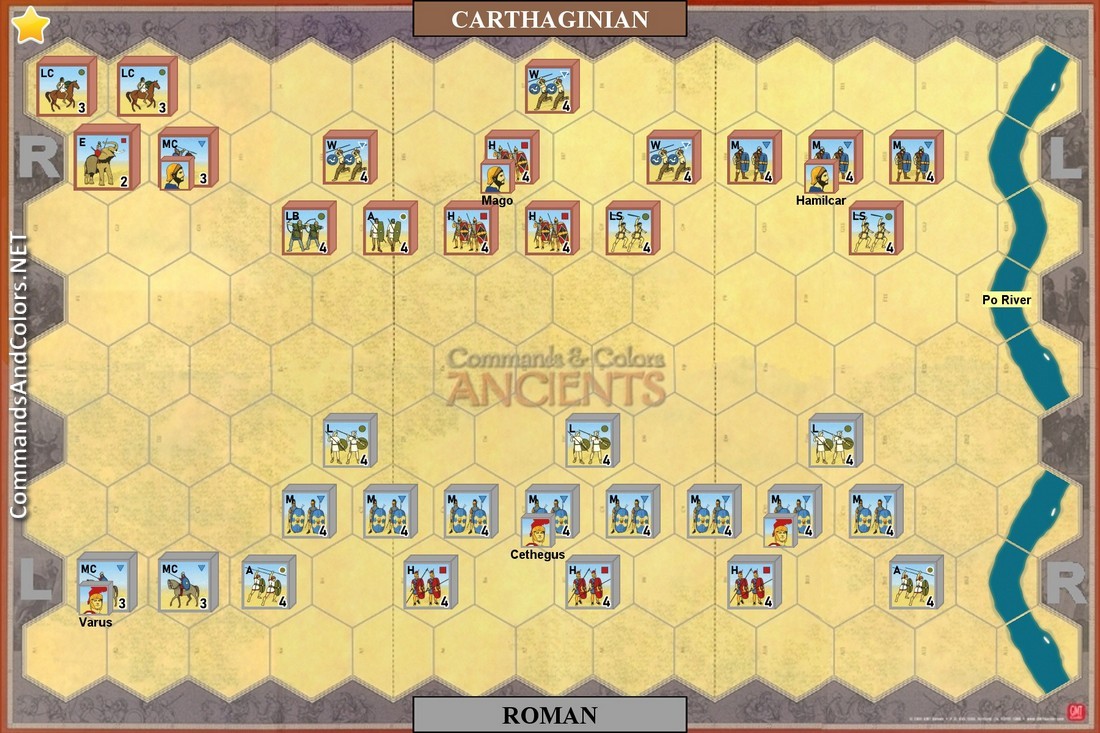