Historical Background
Following the Battle of Baecula, Hasdrubal and Mago Barca and Hasdrubal Gisco gathered for a council of war in 208 BC. They decided that Hasdrubal Barca would cross the Alps into Italy. Mago broke up his army to provide troops for his brother and sailed for the Balearis to raise more troops. Hasdrubal Gisco retreated to the Atlantic coast while Massinissa with 3,000 cavalry held Scipio Africanus at bay. In 207, Mago returned with about 2,000 Balearics and 4,000 African recruits under Hanno. To round up his new army, Mago recruited a band of 9,000 of the fierce Celtiberians. However, as soon as Scipio learned what Mago was up to, he dispatched his deputy, the propraetor Marcus Junius Silanus, with a single legion of 10,000 foot and 500 horse. Silanus force-marched undetected to a point just 10 miles short of Mago’s position. The Carthaginians wer e in two separate camps – the African to the right, and the Celtiberians to the left. The African camp was properly fortified but the Celtiberians were bivouacked in disorder with little security. Silanus ordered an immediate andvance on the Celtiberian position. The Barbarians’ shouts of terror alerted Mago, who raced over to organize a defense. But the Romans were already charging. A vicious hand-to-hand melee ensured, while Hanno struggle to bring up the African troops. Hanno wasn’t fast enough. Many barbarians were cut down where they stood, and the remainder broke and fled. Mago, seeing that the dat was lost, made good his withdrawal with 2,000 infantry and nearly all the mounted troops. Hanno, coming up with the last troops, was captured. There would be no Carthaginian counter-offensive in Spain this year. The final showdown was delayed until 206 at Ilipa.
The stage is set. The battle lines are drawn and you are in command. Can you change history? 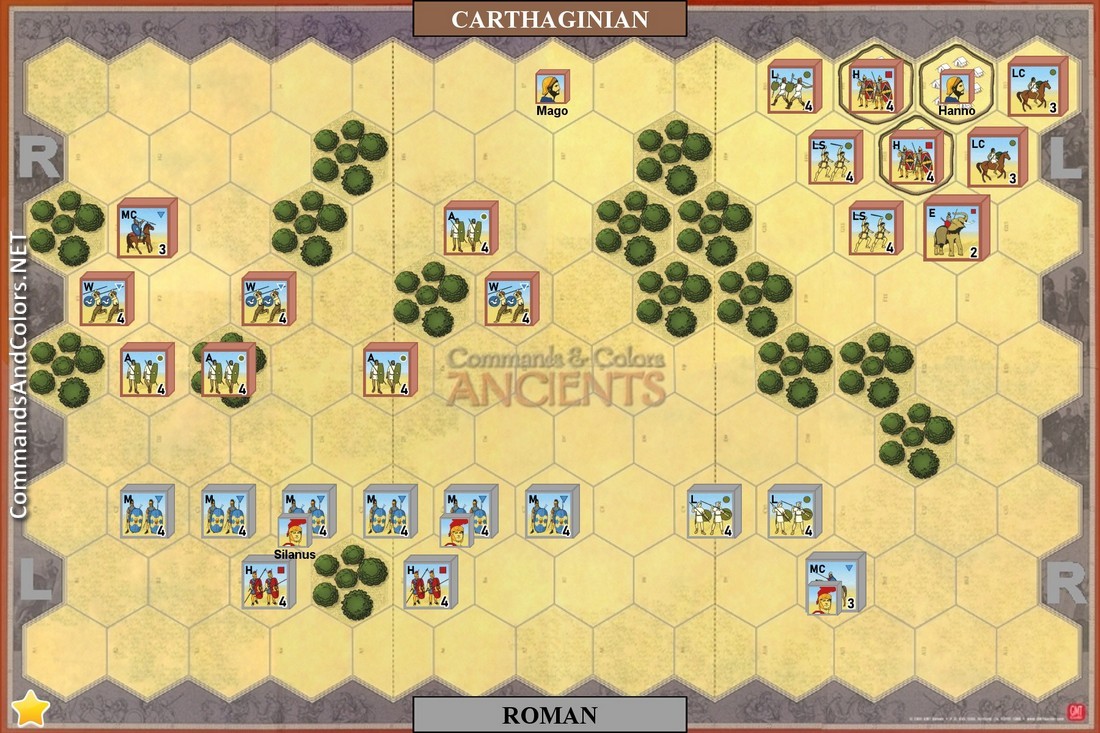