Historical Background
In 207 BC Rome has a big problem—Hasdrubal and his army from Spain are in northern Italy, advancing to combine with Hannibal and possibly win the war. The Carthaginians have a problem too. The Romans know Hasdrubal is coming, but Hannibal does not. To the south, the Consul Nero and his army remain close to Hannibal's army. Taking a daring risk, Nero leaves part of his army to convince Hannibal that nothing is happening. Making an epic forced march, in six days he joins the Romans opposing Hasdrubal, giving them an edge in numbers. Hasdrubal tries to retreat, but the flooded Metaurus blocks his way. He must stand his ground with his reliable Spaniards and Africans, and his rapidly deserting Gallic ‘allies.’ Nero is also the hero of the battle, marching his elite troops to fall upon the exposed Carthaginian right. The Carthaginian line crumbles; most of the reliable infantry is slaughtered, and Hasdrubal, seeing the battle is lost, rides into a Roman formation to his death. Returning south, Nero now lets Hannibal know the true situation—he has Hasdrubal's head tossed into Hannibal’s camp. This decisive battle marked the beginning of the end for Hannibal in Italy and for Carthage's chances of winning the war.
The stage is set. The battle lines are drawn and you are in command. The rest is history. 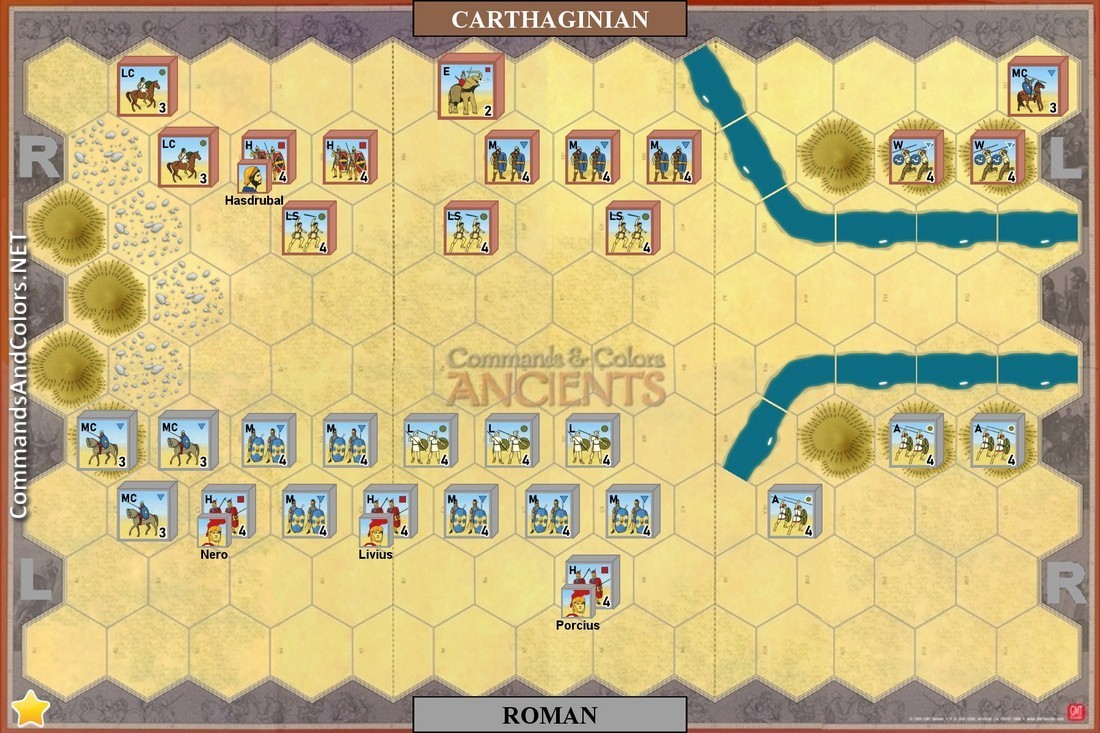 Tomek replied the topic: #2668 3 years 8 months ago
Although the scenario is a poor representation of the battle as described in Livy and Polibius, it is a fun one to play.

This may have been the most uninspiring battle I have played yet. Rome opened with an line command to push everyone forward. Hmm... looking to be a big huge conflict in the center, always interesting. But Carthage could get nothing to move its right flank. Not a single card. The majority of their orders were for their left flank or leadership cards that were not for the right flank. Despite this lack of mobility, they were devastating on the battle back. Carthage absolutely crushed the Roman attackers. Both sides seemed to only take casualties from battle back. A very defensive battle.

Well, again the battle did not go well for the Romans. Despite their superior tactics and mobility, as well as better troops, they still managed to fail. Carthage was again devastating on the battle back, but this time it was coupled by some average attacks as well. Hasdrubal managed to eliminate THREE in battle back on the SAME order, while only taking 2 blocks of casualties. It is really hard to defeat your opponent when they do not realize they are outmatched and should flee. Rome maneuvered themselves well, but Carthage always had the upper hand in every conflict. Sometimes the gods just hate you.