Historical Background
Publius Cornelius Scipio inherited his slain father’s bravery, but he also had the intelligence to modify standard Roman tactical doctrine. As he rebuilt and retrained the legions in Spain, he made them far more flexible tactically than any other Roman legions. He first put this training to use at Baecula where Hasdrubal, Hannibal’s brother, had drawn up his army in a strong hilltop defensive position – light troops to the front; heavy troops in reserve in the camps. Traditional Roman practice would have sent the legions straight ahead at the hills. Scipio, however, put his legionary infantry on each flank and advanced his light troops in the center. As the battle was joined, Hasdrubal discovered he was being outmaneuvered. If he advanced his heavies to support the light troops, the Roman legions on each flank would encircle his entire army. Knowing his army was urgently needed in Italy, Hasdrubal withdrew his heavies and left the light troops to either escape or die in place. While not a complete victory, Scipio had beaten a good Carthaginian army without the heavy casualties that would have occurred in a traditional Roman frontal assault.
The stage is set. The battle lines are drawn and you are in command. The rest is history. 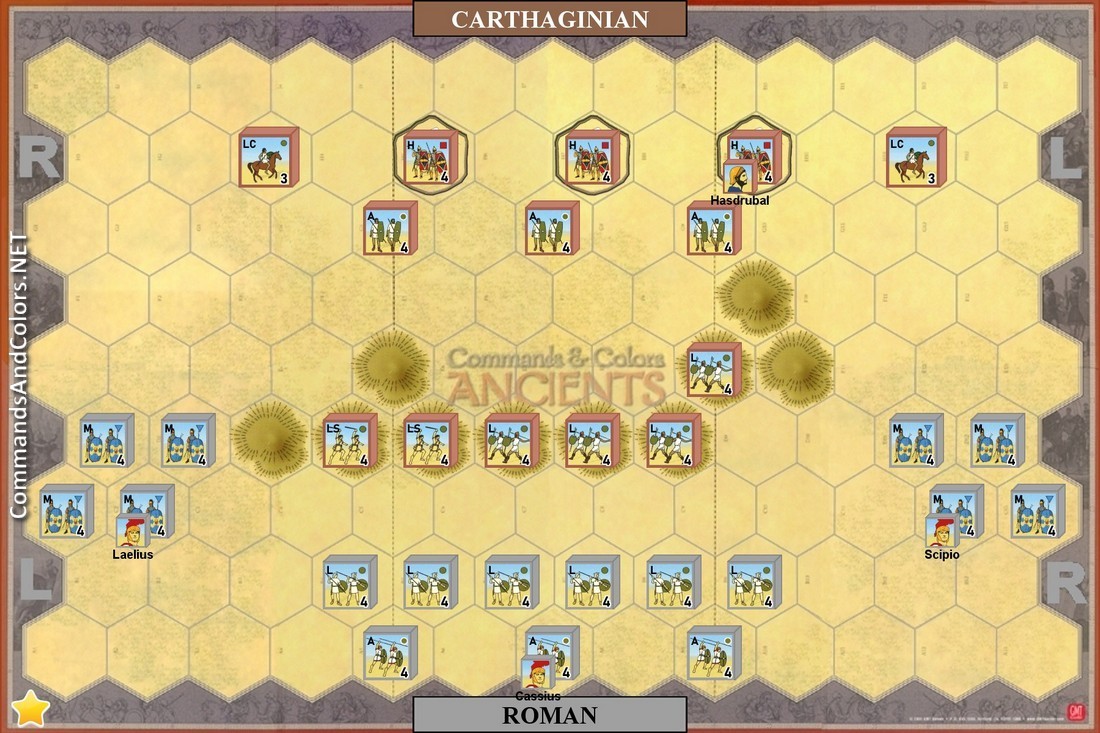 Special Rules
A Roman unit that captures (enters) a camp hex gains one Victory Banner for the Roman player. The unit must stop on the hex, not just move through the hex. A camp may be only captured once, and when the Victory Banner is gained it may not be lost.

Warboard replied the topic: #3852 1 year 9 months ago
Fun battle to play. Two games, as Carthage I won against a friend 6:5, and lost against my nephew 6:4
BrentR replied the topic: #1918 6 years 13 hours ago
A Carthaginian win. Carthage, with two line command cards and a counter attack to start, was able to setup a screen on the left flank with a supporting heavy and shift the rest of his army to address the other flank. Rome advanced both flanks in response and was able to kill a heavy infantry and severely weaken another, but wasn't able to finish it. In the center, Carthaginian archers fired with three line commands in a row (one a counter attack), and a darken the sky card as well. Only 4 hits were scored over all 4 cards, demonstrating an embarrassing lack of ability from the Carthaginian archers. However, Rome was unable to capitalize with an army spread apart, and Carthage was able to cut down enough MI from range (1 on the left, 2 on the right) as well as 3 light infantry. Carthage had several units at 1 block, but Rome had no means of quickly advancing to the backlines without taking fire the whole way.

Carthage 6 - Rome 3
Anduril replied the topic: #1017 12 years 1 month ago
A Roman win. The Roman center pushed forward and took the hills, but without inflicting extensive damage on the Carthaginians, which had simply fallen back while giving as good as they got as the Catharginian heavies moved to their right. The Roman left advanced, collided with the Carthaginian heavies, and were annihilated though eliminating one heavy and hammering another into uselessness. The Carthaginians tried a last ditch effort to pick off battered Romans, including one behind the Roman lines, but only got one of the two they needed. The Romans surrounded and annihilated the Carthaginian unit behind their lines for the win.

The early Roman strategy was to force the light Carthaginian units off the hills, which was surprisingly effective. The Roman command was enabling them to constantly harass and weaken these troops, forcing them back. Rome pushed their right legion forward to try and take a camp but was met with a well orchestrated defense that cost the lives of all four units. Hasdrubal was not going to go down easy. The next period of the battle focused on Rome taking the hills and trying to pick off light units. Though they caused casualties they failed to eliminate anything. The final phase of the battle began when Laelius pushed his legion forward. They were very effective and swept through the Carthaginian troops to claim the remaining banners.

The Romans marched forward secure in both their numerical superiority as well as the awesome command of their officers. I mean, how could having two line commands, a rally, and several leadership cards go wrong? They are just facing light troops after all. Well, just being the \"obvious\" favorite does not matter on the field of battle. Carthage eliminated FIVE units before Rome had even killed one. Hasdrubal expertly led his heavy infantry against the Roman legion completely smashing it to pieces using a combination of First Strike and Double Time. Rome stood no chance against such an onslaught. Needless to say, Rome did not have a chance to recover very well, but still managed an aggressive push with the remaining legion. It was set to destroy several Carthaginian units, until a lone heavy infantry finally had enough and advanced cutting down a whole unit in a single attack. Every Carthaginian melee attack by heavy infantry resulted in an eliminated unit, 4 of them being at full strength.

Dimsum replied the topic: #181 14 years 7 months ago
Definetly one of my favourite scenarios... radically asymetrical with an important terrain factor... As a Carthaginian, I just love to play the "guerilla" in the hills if the roman tries to go central... on the other side if the Roman has the means for getting on the wings (with 3!!!! leaders it's quite possible) it can be really a hard time for the Cart...
Read More...