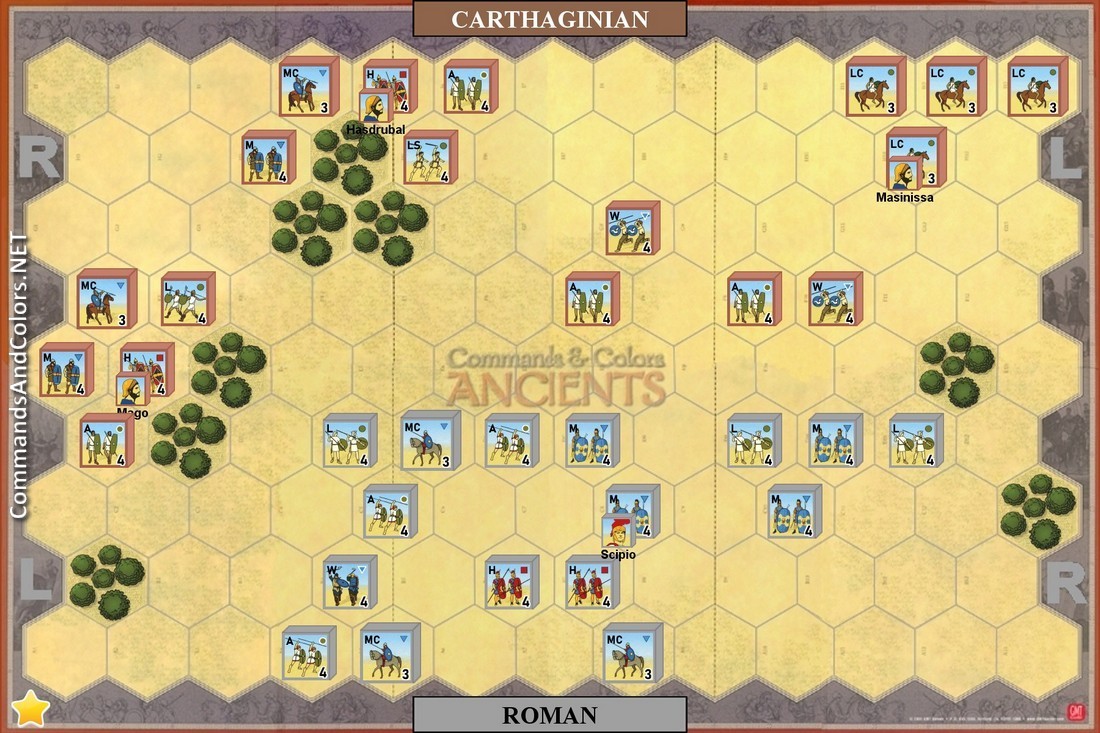 Pevans replied the topic: #3634 1 year 6 months ago
Both my opponent, Evert, and I were a little rusty, but soon got back into the swing of things. Evert fancied the Carthaginians, so I took the Romans. A series of Leadership cards let me move Scipio and the troops from the right half of the Roman force gradually forward, engaging the enemy infantry.
My cavalry charge cards proved less effective and I lost two of the three units (one to a very lucky Auxilia that happened to be next to a leader, Mago, when it battled back).
Evert added Masimissa's light cavalry into the fight on my right, which went back and forth, swapping units, though I kept Scipio protected. His surviving light cavalry drifted into the centre to skirmish with the Romans that hadn't advanced. However, Hasdrubal and his troops were still stuck at the back of the board.
I finally used a left flank card, enabling me to lose my last cavalry and an Auxilia. At least they took out Mago's heavy infantry first. With the score at 7 all, I finally got my heavy infantry into the action, killing a (damaged) light cavalry as it tried to evade this attack.
On this showing, I rather like this scenario, but I do want to play it as the Carthaginians.

TomKnight3 replied the topic: #2942 3 years 1 month ago
Flip sides with Judd. He wins as Rome 8-7 snatching victory from me at the last minute. Really good game though.

TomKnight3 replied the topic: #2893 3 years 2 months ago
Carthage defeats Rome 8-5. Rome killed a Carthagian leader and was still in the game, but at a crucial moment, played his medium cavarly at the wrong time allowing the defeat.

mk20336 replied the topic: #2819 3 years 3 months ago
I think there is a couple os such examples also on other profiles.

g1ul10 replied the topic: #2814 3 years 4 months ago
Hi TomKnight3. I see some text around your avatar image. Is it just me or you have a problem in the configuration of your profile?

TomKnight3 replied the topic: #2813 3 years 4 months ago
In the second game of the first pair in the tournament, player #2 won as the Roman 8-5 against Carthage. Rome pushed hard on the Carthage left pushing them back. Carthage's center was unorganized. The Carthage right got moving but was too late to do any real damage. So, for the first pair's battles, Player #2 is up 4 banners moves on to the other players in a good position. Meanwhile, player #1 is now down 4 banners.

TomKnight3 replied the topic: #2808 3 years 4 months ago
We started a tournament base on this scenario. In the first game, Carthage won 8-7 in a close game. Carthange was helped by 2 mounted charges. The Romans moved close to the center and right exits. Roman was hampered by drawing no line commands in the entire game. The Roman left was crushed just before the Roman right could strike the Carthagians. A close game and a fun one.

TomKnight3 replied the topic: #2399 4 years 3 months ago
Rome shifted to right and made a mad dash to exit the board. Carthage had trouble putting togther a strong defense to stop them. The Roman general had several casualty checks, but survived. A rally card helped him to gain strenth. Rome won 8 to 5 without exiting troops off the board.

TomKnight3 replied the topic: #2328 4 years 4 months ago
Rome was able to push through the center winning 8-5. It was really close at the end, with Rome getting two troops off the board. Carthage had one general leave the field. All the Carthagian light calvary were killed in the attempt to stop the Roman troops from exiting. Even two mounted charges could not stopp them. Scipio survied several kill checks.

TomKnight3 replied the topic: #1615 6 years 3 weeks ago
Carthage won in a tight fight 8/7. Hasdurbal went to the Roman side of the board taking two banners to end the game. Two Roman units were about to leave the field and gain banners, but they failed to exit in time. An amazing game, full of tension and nail-biting.

TomKnight3 replied the topic: #1593 6 years 1 month ago
Carthage won when Hasdrubal went man to man with Scipio. It was 7 to 4 when Hasdrubal crushed Scipio's Medium Infantry making it 8/4. No Romans left the board for the banner bonus. A rematch is scheduled.
Anduril replied the topic: #1016 11 years 5 months ago
A win for Carthage. The Roman center rolled forward, annihilating and pushing back the Carthaginians in the way while pulling back the weakened units and keeping Scipio safe. The Romans had a clear road in front of them, when the Carthaginian cavalry swept around the flanks to pick off enough weakened Roman units for the win.