Historical Background
Desperate for manpower to replace the losses at Cannae, the Romans found a unique solution. They formed two legions from slaves. They were given to the Consul Gracchus who saw their potential and trained them well. Two years later, still under his command, these legions engaged a Carthaginian army under Hanno. Gracchus issued a decree to his men before the battle - freedom to any soldier bringing back a Carthaginian head. The Roman attack started well, but as soon as Carthaginians began to fall, scores of Gracchus's troops broke ranks to decapitate corpses. Faced with a disintegrating army, Gracchus corrected his error by amending his decree to "win the battle and secure your freedom." The slave soldiers quickly reformed and swept all before them. Interestingly, these soldiers gave their loyalty to Gracchus - not Rome. When he was killed a few years later, most of the soldiers in these legions deserted.
The stage is set. The battle lines are drawn and you are in command. The rest is history. 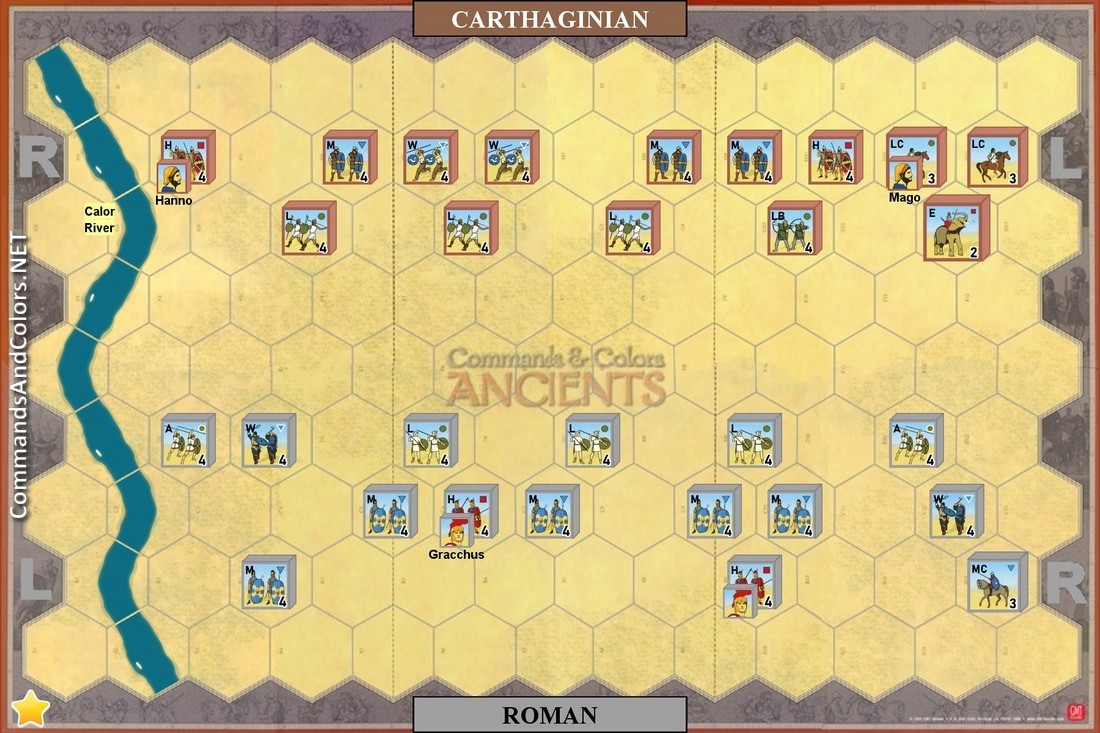 Special Rules
The Calor River in not fordable.

When the Roman player gains his third victory banner block, he immediately draws two additional command cards. He will hold a hand of 6 Command Cards

An exciting battle commenced with light skirmishing on the Roman right, where the legions sought to pin down the Carthaginian elephant with light infantry, and the Punic forces sought to hit the light/auxilia troops hard in return. The first banner of the battle was, however, scored on the Roman left. A courageous charge by a contingent of Warrior infantry was the last thing brave Hanno ever saw. After the fortuitous killing of the Carthaginian leader on the left, the Romans fought on, killing the heavy infantry unit Hanno had led before his untimely end. The Punic general did not give up, however, and counter-attacked the Roman right flank, with one Line Command being executed in very timely manner so as to ensure Carthaginian initiative on the entire field of battle. Indeed, Carthage's Warrior unit on its left slaughtered two units of Roman soldiers before Gracchus regained the flank.

Clashes in the centre and the Roman right continued without the balance being tipped one way or another. The Carthaginian counter-push in the centre with a half-depleted Warrior unit proved to be a costly gambit. The Warriors almost dispatched a unit of medium Roman infantry, but the legionnaires held their ground and killed the barbaric berserkers on the battle-back.

The focus then shifted to the Carthaginian light, where unlucky Punic rolls for the final blows proved devastating. The Romans maintained cohesion of their depleted units and held their ground, enabling a counter-push which brought down some Punic medium infantry, giving the Romans a 5-2 lead.

The Punic general now unleashed his hidden weapon. A mounted charge of elephants and light cavalry sought to demolish the Roman right. The Carthaginians were succesful in this endeavor, even as the elephant perished to a determined counter-attack by Roman auxilia and light infantry. The Numidian cavalry (with a second consecutive mounted charge), however, made short work of the weakened Roman units in this sector of the battlefield, claiming three victory banners in one turn, tipping the result from 6-3 to 6-6 in the process.

With the Roman right flank completely decimated, Gracchus seized the initiative on the opposite flank. He personally led his unit of Heavy infantry against a full-strength Punich medium infrantry detachment. Inspired by their general, the legionnaires inflicted terrible wounds upon the enemy, forcing them back. On the bonus combat following the momentum advance, Gracchus' skilled soldiers made no mistake and finished off the Carthaginian opposition. Thus, the Romans prevailed on the left even as Carthage won the day across the battlefield.

A very close engagement, where especially the early (and lucky) blow to Hanno in the Punic right seemed decisive. Carthage proved its worth through its determined cavalry attack on their left, gaining 4 of their 6 victory banners in just two turns of elephant- and horse-driven attacks.

I thank Brent for a very thrilling game.

The Carthaginians pushed on their left flank with all troops supported by the Elephant, this caused the Roman some troubles and allowed to gain some banner. Romans spent too much time to deploy the strong center being concentrated to defend their right flank.

Roman - Carthaginian 5 - 7
Anduril replied the topic: #990 11 years 10 months ago
Another Roman victory. As in the previous scenario, the flanks gave as good as they got, especially the Carthaginian right and Roman left - they hammered each other into uselessness. And again, it was the Roman center that carried the day, though it had to fight hard for it (though the final blow came on the Carthaginian left).

The Romans pushed their legions forward to start the battle. Carthage was taking a very cautious approach, mainly focusing on adjusting its line. Rome took the early lead by cutting down a couple of medium infantry who strayed too close to their line. Both sides were hitting hard, but could not finish off their enemy. The generals seemed desperate to keep their weak units out of harm's way. It proved successful for a while until Carthage finally pushed its warriors forward with a double time to start racking up some easy banners. Rome had a shot at a victory, but two turns in a row Roman cavalry failed to eliminate single block unit adjacent to other single block units. Easy banners that they just were not capitalizing on.

This time the Romans force marched forward to close with the Carthaginian line. Carthage really only had good control of their flanks which they used to good advantage in pushing back the advance. Unfortunately, their old problem of not being able to finish off units hurt them again. Rome had four units reduced to a single block by the battle's end with no Carthaginian unit near them. Gracchus was making sure no one would pick off his weakened slave legions. The added command cards came at an opportune time when they were earned on a battle back. Carthage had their shot at pulling off another victory, but just could not finish.