Historical Background
“Scipio decided to acquire (after his landing in Africa) the important city of Utica as a winter base and advanced to about a mile’s distance from the walls pitching his camp on a line of hills at whose northern end the town stood. The Carthaginians had raised no considerable forces available for the defence of the region, but they had raised a body of cavalry, largely Numidians but also including over two hundred Carthaginians, some of noble family under a Hanno, son of Hamilcar. This force was billeted in the town of Salaeca (probably modern-day Henchir el Bey) about fifteen miles west of the Roman camp. Scipio sent Masinissa with a body of horse to ride up to the town, draw the enemy out and entice them, by a tactical withdrawal, to pursue him past the southern foot of a range of hills, behind a saddle of which he would be waiting with the rest of the cavalry.” “The ambush was entirely successful. Masinissa’s men, after putting up a stiff fight, retired in good order towards Utica with the enemy in close pursuit, and when the latter reached the place where Scipio’s cavalry waited, hidden from view behind the high ground, they were taken in the flank, while Masinissa wheeled his horses about and attacked them in front. Hanno and a thousand of his men were killed in the battle and two thousand more killed or captured in the pursuit of the routed force. Following this battle-which is known to history as the battle of the Tower of Agathocles, from an old fort (supposedly built or controlled by the Syracusan Tyrant Agathocles during his invasion of Carthaginian Africa in the late 4th century BC) that commanded the ambush position-Scipio occupied and garrisoned Salaeca and spent a week devastating and plundering the whole region before returning to the more serious matter of besieging Utica.” (The above selection, with some minor additions was taken from Brian Caven’s book The Punic Wars pages 237-238 which also contains a map of that corner of Africa near Utica) 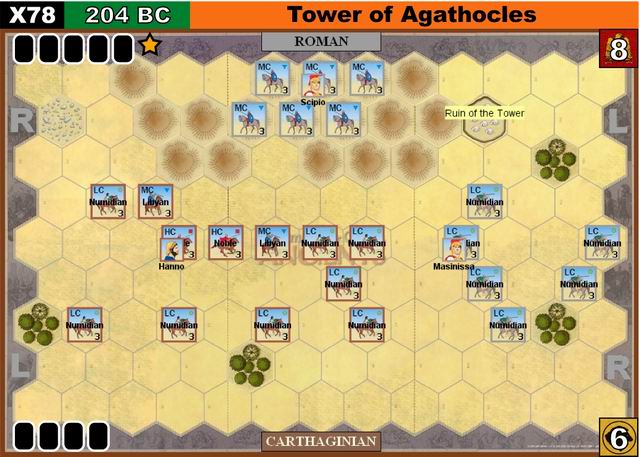 Special Rules:
Command Cards: For this scenario, as it is a purely cavalry action, remove ALL Line Command Cards and Double Time Cards from the Command Deck when setting up the game. These cards are not used in The Combat of the Tower of Agathocles 204 BC scenario. Command Rules: On the Roman side only Scipio can provide any benefit or retreat prevention in close-combat or battle-back to Roman Medium Cavalry units. Masinissa cannot. Likewise and also on the Roman side only Masinissa can provide any benefit or retreat prevention in close-combat or battle-back to pro-Roman Numidian Light Cavalry units. Scipio cannot. Hanno, for his part, has no restrictions as to which unit of his overall Cavalry force he can support, nationality/ethnic origin doesn’t matter. Any Leader in the scenario can cancel a sword hit result if stacked with the appropriate unit (as above) in lieu of canceling a retreat result in that combat. Masinissa may move up to 4 hexes when moving alone. . Modified Cavalry Retreat Distances: & Board Side Clarification The Cavalry retreat distances per Flag result taken in this scenario are reduced to the distances noted below for both sides. Note: Heavy Cavalry remains at 2 hex retreats. All Light Cavalry retreat 3 hexes per Flag taken All Medium Cavalry retreats 2 hexes per Flag taken The Roman side Retreats/Evades toward Hexrow “I”, the Carthaginian side Retreats/Evades towards Hexrow A. Outflanking---This is an easy way of introducing facing and flanks to the game with little fuss—it can be retrofitted to other scenarios where appropriate: A unit is said to be “Outflanked” if it is surrounded in all six adjacent hexes by either enemy units, or hexes adjacent to an enemy unit. The presence of friendly units or impassable terrain does not negate an “Outflanked” situation in any way. Units on the board edges (and not surrounded by six adjacent hexes) cannot be “Outflanked”. Effects of being Outflanked: “Outflanked” units when battling back roll only half the normal number of dice they would be normally entitled to rounded up—to a maximum of only two dice—“Outflanked” units when battling back never hit on helmet rolls even if supported by a leader. A unit’s “Outflanked” situation is judged at the instant it battles back. Terrain Special Rules: Ruin of the Tower of Agathocles: Only Leaders may enter via an ordered move or retreat/advance/evade into this hex. Units may evade or retreat through the Tower of Agathocles hex as long as they do not end their retreat/evasion in the hex. Units may attack Leaders located in the ruin hex from an adjacent one, but cannot missile fire into the hex. The ruin also blocks the line of sight. Palm Trees: Units battling back from a Palm Tree hex do so at +1 dice. Units located in a Palm Tree hex cannot be outflanked. Palm Trees block line of sight for missile fire. There are no other combat effects and the Palms do not effect ordered moves. Hills: Use the normal rulebook rules, however ordered unit moves from a clear hex to a hill hex (uphill) now cost one extra hex of movement (a total of 2 MP), Ordered unit moves downhill (from the hill to the clear terrain) are at the normal (1 MP) rate. Leaders moving by themselves are not affected by the extra unit move cost when going uphill.