This is an ancient battle about which little is known. All we really know are the sides involved, the result, and that it was supposedly a great battle in which it is said some 30,000 fell (probably a gross over-estimate). Syphax, a powerful Numidian king,, allied himself with Rome. Carthage had to recall Hannibal’s brother Hasdrubal to Africa with his Spanish veterans and make common cause with another Numidian king, Gala, and his son Masinissa, to put down Syphax’s great rebellion. Later on in the 2nd Punic War this cast of Numidian characters switched sides when Syphax took over Gala’s kingdom after his death and married a Carthaginian beauty as part of a new pro-Punic political alliance, and the prince, Masinissa, was forced to seek Roman help to settle his vendetta with Syphax and regain his father’s kingdom.

Historical Background
“The two Scipios, Publius and Cnaeus, after their successful operations in Spain, in the course of which they won back many old allies and gained new ones, during the year began to hope for similar results in Africa. Syphax, king of the Numidians, had suddenly taken up a hostile attitude towards Carthage. The Scipios sent three centurions on a mission to him, with instructions to conclude a friendly alliance with him and to assure him that if he would go on persistently harassing the Carthaginians he would confer an obligation on the senate and people of Rome, and it would be their endeavor to repay the debt of gratitude at a fitting time end with large interest. The barbarian was delighted at the mission and held frequent conversations with the centurions upon the methods of warfare. As he listened to the seasoned soldiers he found out how many things he was ignorant of, and how great the contrast was between his own practice and their discipline and organization. He asked that whilst two of them carried back the report of their mission to their commanders, the third might remain with him as a military instructor. He explained that the Numidians made very poor infantry soldiers, they were only useful as mounted troops; he explained that this was the style of warfare which his ancestors had adopted from the very earliest times, it was the style to which he had been trained from his boyhood. They had an enemy who depended mainly upon his infantry, and if he wished to meet him with equal strength he must provide himself also with infantry. His kingdom contained an abundant population fit for the purpose, but he did not know the proper method of arming and equipping and drilling them. All was disorderly and haphazard, just like a crowd collected together by chance. “ “The envoys replied that for the time being they would do what he wished, on the distinct understanding that if their commanders did not approve of the arrangement he would at once send back the one who remained. This man's name was Statorius. The king sent some Numidians to accompany the two Romans to Spain and obtain sanction for the arrangement from the commanders. He also charged them to take immediate steps to persuade the Numidians who were acting as auxiliaries with the Carthaginian troops to come over to the Romans. Out of the large number of young men which the country contained Statorius enrolled a force of infantry for the king. These he formed into companies pretty much on the Roman model, and by drilling and exercising them he taught them to follow their standards and keep their ranks. He also made them so familiar with the work of entrenchment and other regular military tasks that the king placed quite as much confidence in his infantry as in his cavalry, and in a pitched battle fought on a level plain he proved superior to the Carthaginians. The presence of the king's envoys in Spain proved very serviceable to the Romans, for on the news of their arrival numerous desertions took place amongst the Numidians. So between Syphax and the Romans friendly relations were established. As soon as the Carthaginians heard what was going on, they sent envoys to Gala, who reigned in the other part of Numidia over a tribe called Maesuli.” “Gala had a son called Masinissa, seventeen years old, but a youth of such a strong character that even then it was evident that he would make the kingdom greater and wealthier than he received it. The envoys pointed out to Gala that since Syphax had joined the Romans in order to strengthen his hands, by their alliance, against the kings and peoples of Africa, the best thing for him to do would be to unite with the Carthaginians as soon as possible, before Syphax crossed into Spain or the Romans into Africa. Syphax, they said, could easily be crushed, for he had got nothing out of the Roman alliance except the name. Gala's son asked to be entrusted with the management of the war and easily persuaded his father to send an army, which in conjunction with the Carthaginians conquered Syphax in a great battle, in which it is stated that 30,000 men were killed. Syphax with a few of his horse fled from the field to the Maurusii, a tribe of Numidians who dwell at almost the furthest point of Africa near the ocean, opposite Gades. At the news of his arrival the barbarians flocked to him from all sides and in a short time he armed an immense force. Whilst he was preparing to cross over with them into Spain, which was only separated by a narrow strait, Masinissa arrived with his victorious army, and won a great reputation by the way in which he concluded the war against Syphax without any help from the Carthaginians”…. (from Livy Book 24) “This defeat also led to Mago Barca and Hasdrubal Gisco arriving in Spain with two armies and ending the undisputed command of the Barcid family in Spain. The Carthaginains fought the Scipio brothers and had on the whole the worst of the conflict between 215 and 212 BC, but managed to prevent the loss of any territory. At the instigation of the Romans, Syphax, one of the kings of the Numidian tribes, attacked Carthaginian territories in Africa in 213/212 BC. The situation in Spain was suffuciantly under control, because Hasdrubal and his Spanish army crossed over to Africa and crushed the threat of Syphax in a battle where 30,000 Numidians were killed. With his Roman trained army shattered, Syphax fled to Mauritania. The aid of Masinissa, a Numidian prince, was invaluable during this episode, and he crossed over to Spain with Hasdrubal after the African expedition ended with 3,000 Numidian cavalry.” (from Wikpedia’s entry on the life of Hasdrubal Barca) 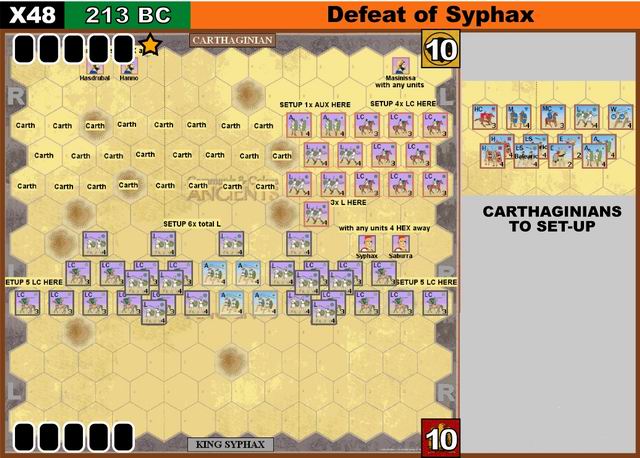 Special Scenario Rules:
Command:
All Leaders may cancel a retreat or a sword hit if present with the unit. Exception: Hasdrubal may cancel both a retreat and a sword.
Units on both sides involved in close combat with the support of a Leader may only count one helmet hit amongst those rolled to inflict a hit on an opposing unit. Exceptions: Hasdrubal and Syphax may count up to two helmet hits when they are supporting the combat.
Leaders from one army on the Combined force side offer no benefit of any kind and may not attach themselves to units of the other army.
Leader Movement Capabilities: Numidian Leaders ordered to move by themselves may move up to four Hexes. Numidian Leaders in the scenario are: Syphax, Saburra, and Masinissa.

Carthaginian Elite Balearic Slingers:
The two Carthaginian Light Slinger units in the game have the following advantages:
a) In Battle-back only in close-combat they hit on swords.
b) In Missile fire they hit on swords when the target is one or two hexes away.
Syphax’s Roman trained Foot: All of Syphax’s Auxillia units are assumed to be Roman trained and have the following special characteristics—
a) They only throw one dice when missile firing regardless of whether or not they have moved.
b) In close combat attacks (but not battlebacks) they throw a ‘normal’ maximum of four dice if they still have a strength of three or four blocks at the instant of the roll.