Historical Background
“Near Nola, Hanno joined his chief with a part of the four thousand recruits and elephants from Carthage, a much needed reinforcement, and one which however small, sensibly cheered the veterans of the harassed Punic army.” “Hannibal first tried to gain Nola by treachery, but failed. This town seemed to be a stumbling block for him. As on the first occasion, when he advanced to the assault, expecting nothing less than the repetition of the counterattack of some months previous, Marcellus, watching the opportune moment, rushed from the gates with such vehemence that he drove in the head of Hannibal’s column at the first shock. Hannibal got the men, however, speedily in hand. The fight was sharp but undecided. A heavy thunderstorm put an end to this day, and Hannibal sat down before the town.” “Three days after, when a strong party of foragers-a considerable part of the whole army-had gone out from the Carthaginian camp, Marcellus seized this opportunity…to draw up in battle array outside the town and offered battle. Nothing loath, though not in force, Hannibal accepted the gage. The distance between the town and Hannibal’s camp was about a mile. In this space the forces met. Marcellus had armed the citizens of Nola, and held them in reserve…the Carthaginian foragers, attracted by the tumult, returned in season to act as a reserve to Hannibal. The Romans opened the battle by their usual attack, made with great vigor, under Marcellus’ inspiring conduct. Equally stanch was Hannibal’s defense. The battle hung in the balance for many hours; the fighting was stubborn and bloody; but apparently without any maneuvering. Finally Roman discipline asserted itself. That the Roman soldier was much better than any but the few veterans of Hannibal is well shown by the victories he won so soon as he got good generals. The flat ground was not such as to enable Hannibal to take advantage of stratagem. He was driven back to his camp-according to Livy-with a loss of five thousand men killed, six hundred prisoners, six elephants, and nineteen standards. Marcellus withdrew into Nola claiming the loss of but one thousand men. ..Next day, under a tacit truce , each party buried its dead.” “Thus Livy. But his account properly summed up, looks more like a drawn battle than the doubtless overstated Carthaginian casualties warrant. If Hannibal retired to his camp so did Marcellus to Nola. If Marcellus had won so marked a victory, how did Hannibal save his army on a perfectly flat plain? Why should there have been a “tacit truce” to bury the dead when Marcellus had control of the field of battle? That Hannibal did not win a victory seems certain, for the proconsul held Nola. That Marcellus won one is, to say the least doubtful. All the statements of Livy, weighed together, point clearly to a drawn battle….” (From Theodore Ayrault Dodge’s classic 1891 work Hannibal pages 419-421) 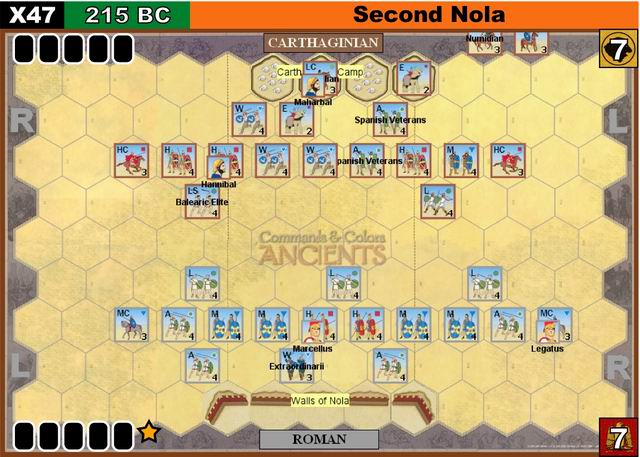 Victory
7 Banners (but each side ignores and does not count the loss of the first Light Infantry unit or Light Slinger unit by his enemy for the purposes of victory at 7 Banners, plus the
battle can end as a draw with no real ultimate loser —see rules below for “Drawn Battle”).

Special Rules:
Command & Drawn Battle:
1) A Leader attached (stacked with) a friendly unit may cancel one sword hit on the unit in lieu of canceling a retreat hit. Hannibal and Marcellus can cancel both a retreat and a sword hit if present.
2) A unit involved in close combat with the support of a Leader may only count one helmet hit amongst those rolled to inflict a hit on an opposing unit. Units stacked with Marcellus or Hannibal can count up to two helmets when inflicting hits rather than just one.
3) Drawn Battle Rule: Historical Notes: Although both sides probably claimed victory at the end of a long day of bloody combat the battle in its tactical and strategic effects was probably pretty close to a draw. Likely a few thousand men on each side were killed or badly wounded leaving the two armies slightly smaller, but largely intact.

The Battle ends in a Draw for both sides when:
a) One side reaches 7 or more banners –the other side is than given until the end of his next turn to also inflict 7 or more banners on the opponent—if he succeeds in managing to reach that goal the battle is a draw and neither player wins---if he fails to get to 7 or more banners by the end of his next round he loses and the player who reached 7 banners first wins.
b) If the Card: “I Am Spartacus” is played twice for orders during the game, the game ends in a draw upon the second Play of the card---don’t even play the card out—game over as a draw. Neither Player may start the game with “I am Spartacus” in his initial hand. Reshuffle the deck after both sides draw their initial hands.
4) Discarding cards & the “Pass Turn”: Each Player may—up to three times per game—declare that he is taking a “Pass turn” at the very start of his turn. He must discard three cards of his choice and then immediately replaces the cards with three more from the top of the draw deck—Reshuffle only the existing deck after a “Pass turn”. During a “Pass Turn” no card is played and no units may move or engage in combat---Play is turned over to the opponent’s turn as soon as the new cards are received. A Player may not announce a “Pass Turn” in the immediately following turn after his opponent has declared one. Neither Player may declare a “Pass” in his very first turn of the game. Neither Player may declare a “Pass” during two of his own successive turns in a row. If a player no longer has his supreme leader (Hannibal or Marcellus) on the map, he may no longer declare a “Pass turn” regardless of how many of the three “Pass turn” ability he has remaining unused.

Special Unit Rules:
Balearic Slingers: The Carthaginian Light Slingers are elite mercenary slingers from the Balearic Islands. Legend has it that they trained from boyhood to throw stones and lead pellets at high velocities with several types of specialized slings. Supposedly, as the
annalists tell it, these rugged islanders insisted on being paid for their services with women instead of the silver or gold other mercenaries received. When firing from a 2 hex range Balearic slinger units hit on swords in addition to the green side when firing only at Roman Light Infantry and Auxillia. Additionally the Slingers when battling back only in close-combat hit on swords.

Hannibal’s Battle-wise Spanish Veterans: Carthaginian Auxillia units have the following add’l advantages:
a) They can evade attacking Roman Medium and Heavy Infantry
b) They battle back with four dice normally instead of three dice.
Hannibal’s Numidian Cavalry: Carthaginian Light Cavalry units have the following add’l advantages:
a) The Carthaginian Light Cavalry are the elite Numidian cavalry—practically born in the saddle, the veterans of countless skirmishes and battles---in battle back only they hit on swords.
b) When retreating Carthaginian Light Cavalry need only retreat 2 hexes per flag hit taken.
Roman Extraordinarii Unit: The Roman Extraordinarii unit represents a picked group of allied troops under the direct command of a consul or pro-consul. It is shown on the map as a 3-block combined arms group of one Medium cavalry block combined with one Medium Infantry and one Light Infantry blocks. It is considered to be a Medium Foot unit for all purposes save it has a normal movement capability of 2 hexes (3 hexes if moved via “Double Time). Also, it attacks with 3 dice only normally and battles back with 4 dice normally in close-combat. The Extraordinarii unit also ignores the first sword result inflicted on it in a close-combat resolution, as long as the unit is not in an outflanked position (see below) at the instant of combat when the dice are rolled.