Historical Background
“ Following Hasdrubal Barca’s withdrawal from Spain (he was on his way to Italy by land to try to join his brother Hannibal) the home government sent out another general, Hanno, with reinforcements for the army of occupation, and he joining forces with Mago, went into Celtiberian country and started to raise recruits there. Hasdrubal Gisgonis (the other major remaining Carthaginian general in Spain)….moved up into the Baetis Valley, the loyalty of whose inhabitants had been shaken by the events of the previous year. Scipio, whose imperium, like that of Silanus, had been prorogued again, sent his colleague at the head of ten thousand foot and five hundred horse to deal with Hanno. Silanus marched as fast as he could through difficult country, using Celtiberian guides, and arrived at the Punic training area without the enemy’s being aware of his approach. The Celtiberian recruits, about nine thousand in number, were in one slackly guarded camp, the mercenaries, observing proper camp discipline, in another a little further off. Silanus was able to approach to within three miles of the former, dump his baggage, feed his men and then put them in order of battle without being seen by the enemy. Then he advanced in order of attack. Mago barely had time to ride over from his own camp and get the Spaniards into some sort of order before the Romans were upon them. The broken ground covered with thickets compelled the two armies to fight in open order, and the battle became a murderous affair of single and group combats, in which the weapon training Scipio had imposed on his men paid a handsome dividend. Hanno appears to have sent his soldiers across piecemeal from the Punic camp, with the result that they were swept away in the rout of the Celtiberians; and Hanno himself and those who joined the battle when it was all but over were captured. Mago, with most of the cavalry, and those of the infantry who had seen battle before and could gauge the inadvisability of lingering upon the field, escaped to join Hasdrubal in the Baetis Valley.” (the above selection with slight changes was taken from Brian Caven’s book “Punic Wars” pages 116-117) 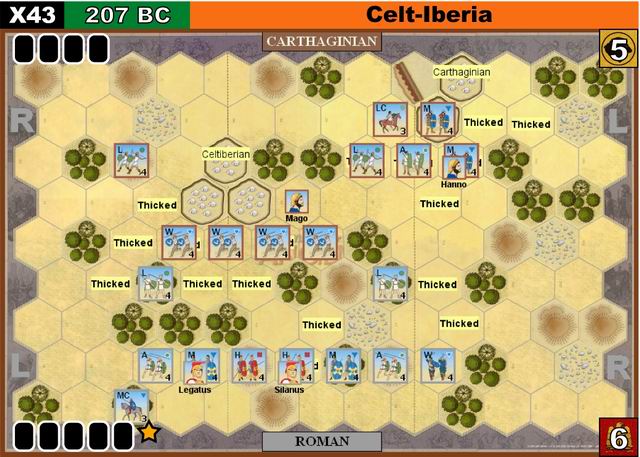 Victory:
Romans—6 Banners (they also receive one banner also for each camp hex they over-run) Carthaginians—5 Banners (normal scoring only)

Special Rules:
Command: A Leader attached (stacked with) a friendly unit may cancel one sword hit on the unit in lieu of canceling a retreat hit. Mago may cancel both a sword and a retreat hit if stacked with a friendly unit. A unit involved in close combat with the support of a Leader may only count one helmet hit amongst those rolled to inflict a hit on an opposing unit
Line Command Card Limits: Due to the rough & wooded terrain no more than four foot units may be activated by a Line Command Card in this scenario.

Special Troop Rules:
Warriors: (Both Sides) “Barbarian Balk”: If a Warrior unit (of whatever side) moves 2 hexes (or 3 hexes using “Double Time”) to a hex adjacent to enemy unit(s) to close combat them and then is unable to do so due to the enemy unit(s) being retreated or eliminated by other attacks, the Warrior unit has failed its requirement to close-combat attack given the length of its pre-combat move. Such units that fail to attack are said to have “balked”—immediately retreat Warrior units in such a situation one hex once all own side close combats are finished. The one hex “Barbarian Balk” retreat is conducted in the normal fashion just as if the unit was forced to retreat one hex after a battle—and it is not optional and cannot be canceled in any way—even by the presence of a leader. “Barbarian Rush”: Limits to Warrior Momentum Combat: Warrior units, regardless of side, reduced to one or two blocks May Not Engage in momentum combat unless a friendly leader is attached to the unit in question.
Carthaginian Veteran Medium Infantry: Carthaginian Medium Infantry when ordered may move exactly as if they were Auxillia.
Carthaginian Light Cavalry: The Carthaginian Light Cavalry are elite Numidian troops. They retreat only 2 hexes per flag result inflicted and when battling back hit on sword rolls.

Outflanking
This is an easy way of introducing facing and flanks to the game with little fuss—it can be retrofitted to other scenarios where appropriate: A unit is said to be “Outflanked” if it is surrounded in all six adjacent hexes by either enemy units, or hexes adjacent to an enemy unit. The presence of friendly units or impassable terrain does not negate an “Outflanked” situation in any way. Units on the board edges (and not surrounded by six adjacent hexes) cannot be “Outflanked”. Effects of being Outflanked: “Outflanked” units when battling back roll only half the normal number of dice they would be normally entitled to rounded up—to a maximum of only two dice—“Outflanked” units when battling back never hit on helmet rolls even if supported by a leader. A unit’s “Outflanked” situation is judged at the instant it battles back.

Special Terrain Rules
Thickets
There are x10 Thicket Hexside markers (I used some plastic model bushes that fit perfectly & look great from some Lego-type set) in the Terrain setup. Set-up each marker as listed above each pair of hexes mentioned denotes the hexside to place a Thicket Marker on
Effect of Thicket Hexsides on Movement: It takes a unit’s entire ordered move to move through a Thicket hexside—the unit must start its move on the other side of the thicket hexside it passes through. Units that just passed through a hedge hexside in the same player-turn may not normally attack in close-combat or by missile fire.. Leaders, moving on their own without being attached to a friendly unit ignore the effects of Thicket hexsides and may pass through them as if they do not exist.
Effect of Thicket Hexsides on Command: Friendly Units in a “block” or “blob” of units for Command purposes and being ordered by the cards are NOT considered to be adjacent to each other for Card Command purposes if the units in question are separated by a thicket hexside. They also are NOT considered adjacent to each other for Leader Command influence in combat.
Effect of Thicket Hexsides on combat: The “Normal” dice when close-combat attacking or battling back through a Hedge—the normal dice is 2 dice either way—of course that can be increased depending on the card or rule used to bring on the battle. Thickets also block lines of sight for missile fire—no missile fire may take place through a thicket except into a hex adjacent to the thicket or from a hex adjacent to a thicket. Units that are adjacent to each other through a thicket hexside may still offer support to each other.
Missile fire into woods, broken ground, or camp hexes or through thicket hexsides is always at one dice only even if the firing unit has not moved.