The Stakes:
“After this exchange, which offered no prospect of a compromise, Hannibal and Scipio parted, and the next morning both generals led out their forces and engaged. The Carthaginians were fighting for their very survival and the possession of Africa, the Romans for the empire and the sovereignty of the world. Is there indeed anyone who, once he has grasped the situation, can remain unmoved when he reads the story of this battle? It would be impossible to find more warlike soldiers, or generals who had been more successful or were more thoroughly versed in the art of war, nor had Fortune ever offered the opposing armies a greater prize than this, since the victors were destined to become the masters not only of Africa and Europe but of all parts of the world known to history. And this, indeed, proved to be the outcome.” (Polybius, Book XV The Rise of the Roman Empire)

Scenario Notes:
The scenario is a “Deluxe Zama” version of the Zama scenario found in the rulebook. A few more units on each side are added and the initial battle order on the map is adjusted to reflect the probable alignment and battle plan of the two armies. The special scenario rules also make allowances for the peculiar battle order adopted by Hannibal, the quality and character of the troops and elephants, and Scipio’s pause to re-organize his troops. 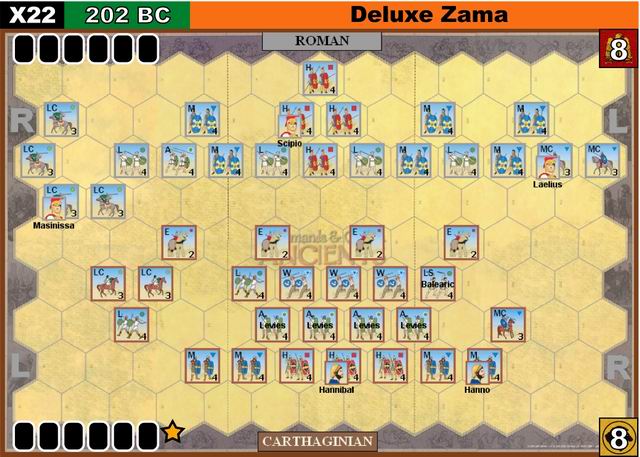 Order of Battle Notes: Hannibal had about 50,000 men on the field, mainly infantry, with very few cavalry along with, as Polybius specifically states, “over eighty” elephants . Scipio had about 40,000+ in the battle, about 10-12,000 of them being Numidian allies led by Masinissa. The only troops Hannibal could firmly rely on were the 20,000 or so veterans that he brought back with himself from Italy, the remainder were either unreliable mercenaries, mainly left over from his now dead brother Mago’s army or raw newly recruited Carthaginian and African levies. Hannibal’s plan was to keep his veteran ‘Army of Italy’ out of the initial clash and disorganize the Romans with the elephants first and the other expendable forces arrayed in two more lines, so that his Italian veterans in the final line of battle could finish the fight and have every chance to break the Roman legions. The annals tell us that the Carthaginian battle order crafted by Hannibal almost succeeded in achieving its goal.

Victory:
8 Banners—but all units & leaders are not worth the same, below is listed the banners received by the players for eliminating different enemy units/leaders:

1 Banner for each eliminated Carth. Heavy or Medium infantry or Hanno

½ Banner for eliminating any other Carthaginian unit except the elephants

½ Banner for eliminating any other Roman unit

Command Rules:
A Leader attached (stacked with) a friendly unit (except an elephant unit) may cancel one sword hit on the unit in lieu of canceling a retreat hit. Hannibal or Scipio can cancel both a retreat and a sword hit if present
A unit involved in close combat with the support of a Leader may only count one helmet hit amongst those rolled to inflict a hit on an opposing unit.A unit in the same hex with Hannibal or Scipio can count up to two helmets when inflicting hits in close combat or battle back rather than just one.

Scipio’s Pause for Regrouping:
Once per game, the Roman Player may—in lieu of taking his Player-turn, announce a pause to regroup his forces. All Roman Medium and Heavy Infantry units not adjacent to the Carthaginians and within four hexes of the Scipio Leader block gain back one eliminated block each. This pause may not be announced if Scipio is no longer on the map or if Scipio is located in a hex adjacent to a Carthaginian unit.

apergis1@verizon.net replied the topic: #4256 9 months 3 weeks ago
I submitted a post about this scenario a few years ago and it has disappeared.

I had a friend who loved COMMAND AND COLOR ANCIENTS and we played it all of the time. Our favorited scenario was "Zama". We must have played this one over a hundred times. We discovered some neat tactics for the elephants. As a result, the game was really competitive.

When I discovered this variant, we were anxious to try it.

This variant is hopelessly unbalance it favor of the Carthaginians. We must have played the scenario over twenty time and the Romans only won twice. Since the Romans do not get a flag destroying the elephants, the Carthaginian player does a suicide charge with the Elephants into the center of the Roman line. Before the elephants are destroyed, they can do enough damage to the Romans that they can never recover from it.

Maybe this is the way Hannibal wanted the battle to go.
Read More...