Historical Background
After their defeat at Sentinum, the Senones attacked the Romans once again in 284 BC but they were so thoroughly crushed that they never recovered again. In 283 BC the Boii allied with the Etruscans and invaded Roman territory, but defeats at Lake Vadimone and Populonia finally subdued the Etruscans and forced a peace treaty on the Boii so that they remained inactive during the Pyrrhic war.
In 232 BC Rome started to distribute former Senones land to Roman settlers. This provoked a massive uprising of Cisalpine Gauls from the Boii, Taurini and Insubres tribes who were joined by their fiercer Transalpine celtic cousins called Gaesatae, led by their kings Concolitanus and Aneroestes. The invading Gallic hoard numbered about 50,000 and they laid waste to many Etrurian settlements as they travelled south. They were finally brought to battle at Clusium by a Roman army, but the Romans were defeated and only saved from destruction by an army under Aemilius papus arriving from Rome to the south.
Faced with this new threat the Gauls retired north along the west coast of Italy with their booty. By lucky chance for the Romans, another army under Atilius Regulus was heading south down the same coast having recently suppressed an uprising in Sardinia. The Inevitable collision occured at Telamon. The Gauls formed a double line facing North and South. A large cavalry battle developed on a hill flanking the main lines, and when this was won by the Romans the Gauls flank was exposed and their men were cut to pieces with both kings dying.
The Romans lost over 10,000 men, but Rome was safe and the Romans would now carry their offensive north into Cisalpine Gaul.
The stage is set. The battle lines are drawn and you are in command. Can you change history? 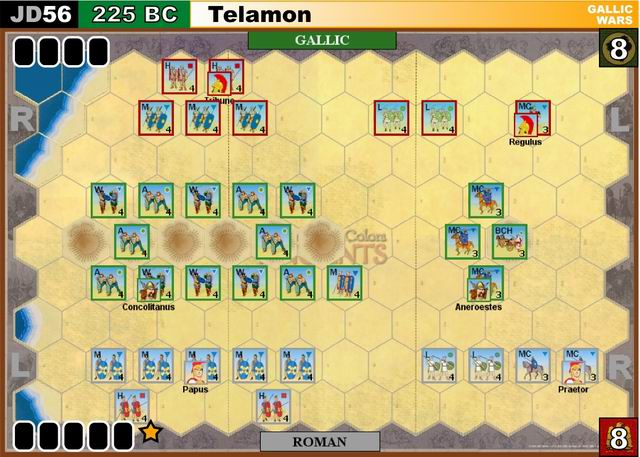 Special Rules
Gallic auxillia units may not use missile fire.

The Gallic army retreats to the E hex row. e.g. A Gallic medium infantry unit in the F hex row which must retreat 2 hexes would 1st retreat to the E hexrow and then lose a block for being unable to retreat further. A Gallic unit already in the E hexrow could not retreat at all.