Gallic Tribes vs the Republic of Rome 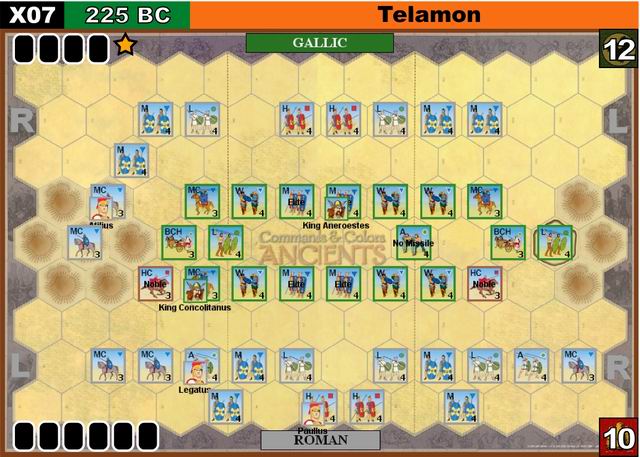 1) Retreat and Evasion: (these rules were added due to the unique layout, ferocity, & character of this battle)
a) Retreats: Units in this game, if retreated due to a flag result, only retreat one hex if infantry, or one or two hexes (owner’s choice) if cavalry units per flag result inflicted and not ignored or canceled. Retreats may be in any direction (if a two hex retreat, however it must end 2 hexes away) as long as the retreat route does not pass adjacent to an enemy unit—units may never retreat through or into hexes adjacent to enemy units. The Gallic Chariots are never and may never be retreated due to a flag result inflicted upon them
b) Evasion: Gallic units in the game may never attempt evasion if attacked in close combat. Roman units may evade in any direction if allowed to evade per the rules, but the hexes they evade into or through may not be adjacent to Gallic units--Roman units may never evade through or into hexes adjacent to enemy units.
Leaders if they evade/retreat and survive, evade simply to the nearest hex occupied by a friendly unit (owner picks if two or more friendly units equidistant)

2) Gallic Elite Warriors: All Gallic medium infantry units are treated as Warriors for all purposes, they are Elite Warriors—in addition they receive one extra dice the very first time in the scenario they battle back or engage in close combat as long as the unit still has three or more blocks.

3) Gallic Auxillia and Noble cavalry:
a) The Gallic Auxillia unit has no missile capability.
b) All Gallic Heavy Cavalry are considered to be Noble Cavalry—they move three hexes, their normal Close Combat dice is 3 dice (not 4) --- in addition they receive one extra dice the very first time in the scenario they battle back or engage in close combat as long as the unit still has two or more blocks

4) Gallic Chariots: (These units played more of a blocking role than a combat one in the battle—likely some of the Gallic vehicles were war chariots, but the main purpose they were used for at Telamon was to protect the Gallic flanks at each end of their double line)
a) Gallic Chariots may only move one hex when moving
b) The only way to inflict hits on Gallic Chariots is to engage them in Close Combat or Battle Back and roll the matching “red’ symbol. Gallic Chariots are totally immune to Roman Missile fire—Gallic Chariots totally ignore any Flag hits inflicted on them—Flag results are always No effect.
c) Gallic Chariots normally roll only 2 dice in close combat or battle back—but may have that increased through the + # on the cards if ordered by such cards.

5) Special Leader Rules:
A Leader attached (stacked with) a friendly unit may cancel one sword hit on the unit in lieu of canceling a retreat hit.
A unit involved in close combat with the support of a Leader may only count one helmet hit amongst those rolled to inflict a hit on an opposing unit.

6) Gallic Line Commands
The maximum number of units the Gallic player may move/order with a Line Command Card is five units.