Historical Background
Not content with the slaughter of the Gauls at Telamon, the Romans launched a series of punitive expeditions into Cisalpine Gaul over the next three years. In 222 a combined Roman army under the consuls Marcus Claudius Marcellus and Gnaeus Cornelius Scipio, was besieging the Gallic town of Acerrae. The Gallic King Britomartus responded by laying siege to Roman-allied Clastidium with an army of 10,000 men. While Scipio pressed the siege of Acerrae with the legions, Marcellus set off with all the Roman cavalry (less than 4,000) and the pick of the lightly equipped velites to rescue Clastidium. Marcellus was a veteran of the First Punic War and already distinguished for his bravery and prowess. Without halting day or night, Marcellus surprised the Gauls at Clastidium. Faced with a Roman force far sooner than expected, the barbarians were forced to lift the siege and march out to meet the oncoming Romans. Though not yet in good order, the Gauls immediately charged in their customary manner with great violence and dreadful threats. King Britomartus rode out in front of his troops. Marcellus led his cavalry forward, extending his wings into a thin line. When he was not far from the enemy, he turned to charge. Meanwhile Britomartus saw Marcellus, and rode far out in front of the rest to challenge him. Marcellus rushed upon the king and slew him with three quick blows. With their king dead the Gallic forces were cut down or put to flight in short order. Never before in Roman history had their cavalry inflected such a defeat against a larger force both dismounted and mounted. Marcellus was awarded the spolia optima for slaying an enemy king in single combat. Both Marcellus and Gnaeus Scipio would soon be facing Hannibal and the Carthaginians.
The stage is set. The battle lines are drawn and you are in command. The rest is history. 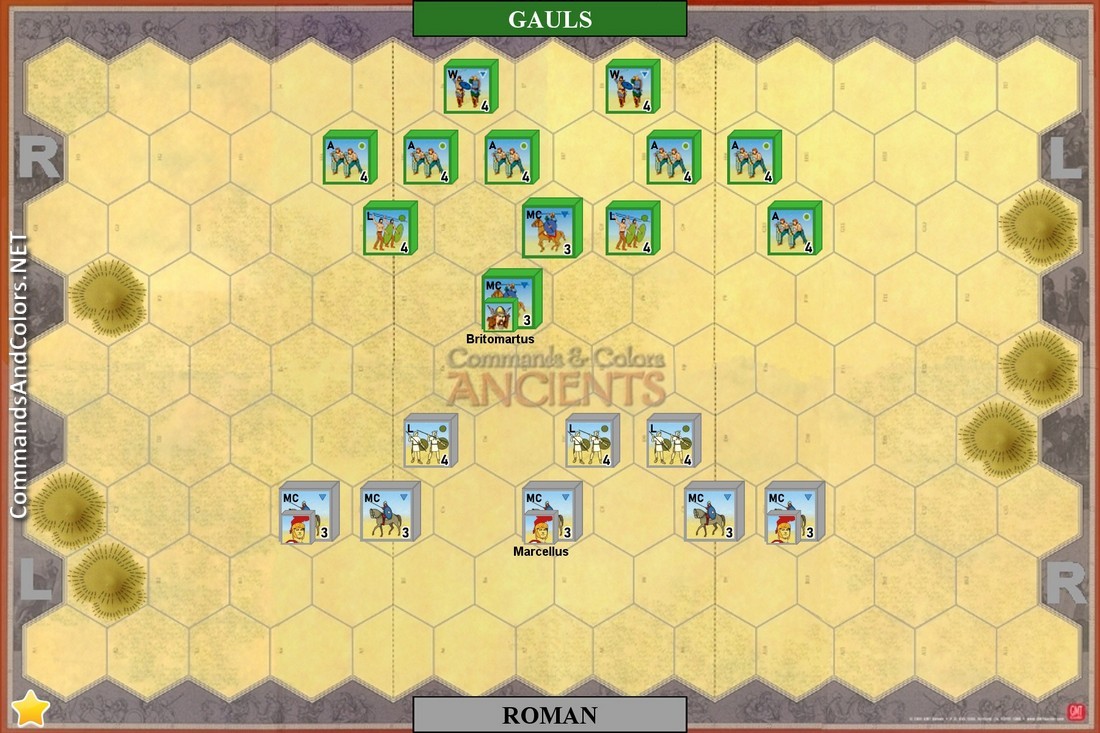 Optional set-up. The Roman Army was still organized along
pre-Marian guidelines. If the Roman player desires, he may use
the gray Roman blocks from the basic game when placing his
units.

RobS replied the topic: #4075 5 months 1 week ago
Playing solo. Romans play Mounted Charge. The two Roman MC on the right take down the exposed Auxilia. In the center, both Gaul MC are destroyed, but they do manage to take down a Roman MC in a battle back. Momentum carries the attack to the exposed Gaul LI on the Roman left, which is quickly overrun.

6 cards vs 4 for Rome is huge, but the main advantage for Rome is starting first.
Mounted charge and it was already 2-0 before I (as Gaul) even blinked. I almost lost Britomartus along with his cavalry but he managed to evade to warriors (the other cav died as well).
The next couple of turns were me struggling to kill some Romans while surviving at the same time. I managed to kill one cav (general survived) and that was it, 2 dead Auxilia it was romans' easy win.

Crappy card for me as Rome (so no Mounted Charge) but still I managed to smash gaul center and wipe out one cav. Britomartus again survived. The next couple of turns were mostly light infantry and auxilia exchanging ranged hits and me trying to reduce warriors to 3 attack dice. There were some close calls but Gauls didn't kill any roman unit (evade for the win

). "Outflanked" and "2 units left" mopped up wounded Gauls and that was that.

Overall, it's a VERY one sided scenario. Gauls simply don't have the answer to Roman MC (especially with commanders either attached or adjacent) and auxilia is quite a liability since it can't evade and is densely packed. It's definitely not a balanced scenario and aside from some godly cards and luck I don't see much hope for gaul army. However, it's quite nice for playing both sides in one session because it's fast and simple.
Read More...