Historical Background
Aenorestes and Concolitanus retreated northwards, pursued by Aemilius Papus with about 30,000 troops. It looked like the Gauls would escape with their booty. Then fortune smiled on Rome. The consul Atilius Regulus was returning from suppressing a rebellion in Sardinia with his army of 25,000 men. He landed at Pisae and was moving south along the same coastal road that the Gauls had chosen for their retreat. Upon learning from his scouts that a Gallic army was approaching, Regulus ordered his legions into fighting order while he advanced at full speed with his cavalry and light infantry to occupy a key hill before the enemy arrived. The Gauls at once sent their own cavalry, chariots, and some light-armed troops to dispute the possession of the hill. When Papus arrived from the south, he also sent his cavalry to the hill, and advanced with his legions. At first the battle was confined to the hill and both armies watched the fighting unfold. Regulus fell, but the Roman cavalry, after a stubborn struggle, gained the hill. Meanwhile, Aenorestes and Concolitanus formed two battle lines back-to-back as the Roman infantry converged on the Gauls from north and south. There was a dreadful din as the whole Gallic army shouted war cries and the Roman light infantry hurled javelins. The Gallic host rushed wildly on their enemy in a rage, but the Roman maniples held their ground. Finally, the Roman cavalry charged down the hill and the Gallic infantry were cut to pieces.
The stage is set. The battle lines are drawn and you are in command. The rest is history. 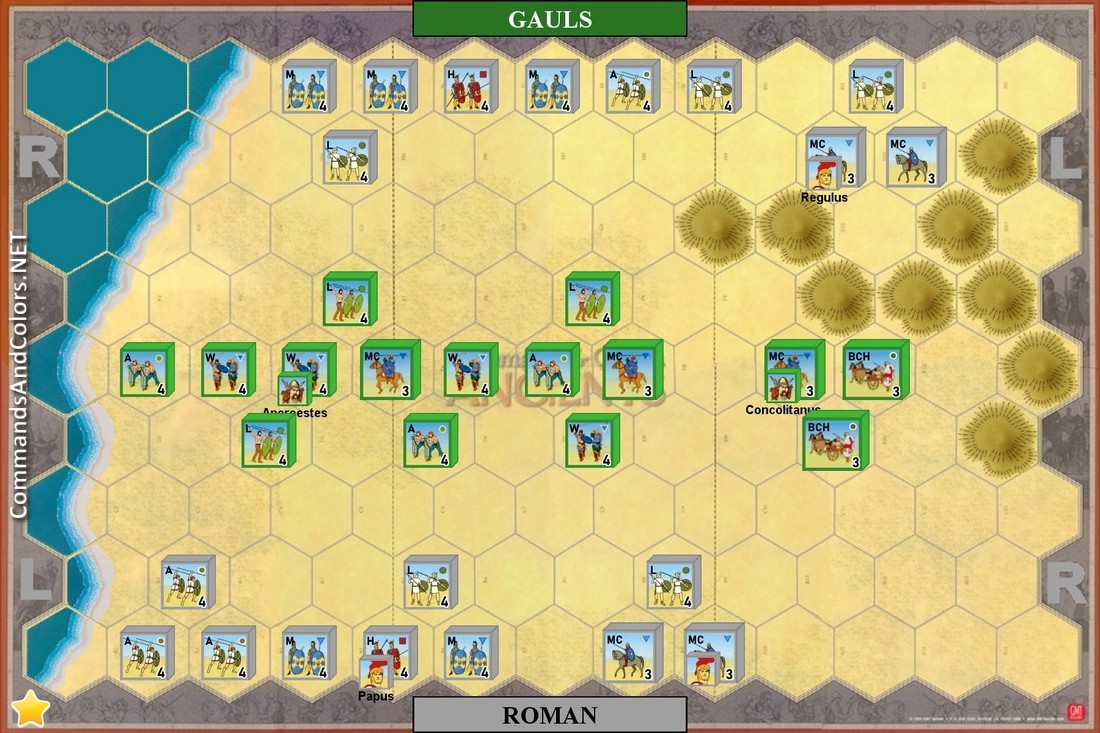 • The River on the left of the battlefield is the sea and is impassable.

• Important Note: Each army must retreat and/or evade toward its side of the battlefield. The Gallic Army and Regulus’ Roman army have the potential to block each other’s retreat/evade routes.

• Barbarian Chariot rules are in effect.

Andygor replied the topic: #3163 1 year 6 months ago
One of the most interesting scenarios! At first glance, victory is already in the hands of the Romans, but this is not so.
Valvorik replied the topic: #2071 4 years 2 days ago
This was a real slaughter of the Gauls two times I played it solo. The 2 banner bonus of the hills mostly serving to "put them out of their misery" when they were trailing banners.
Read More...