Historical Background
The Cisalpine Gauls (those living south of the Alps) had sacked Rome in 390 BC and fought intermittently with Rome for the next 150 years. After a series of defeats early in the Third century BC, the Gauls remained quiet for 50 years. Then in 232 the Romans began settling on captured Gallic lands. This roused the barbarians to prepare another invasion. This time, the Cisalpine Gauls were joined by their kinsmen from across the Alps, the fierce Gaesatae under their Kings Aneroestes and Concolitanus. In 225 BC a force of 70,000 Gauls descended on Etruria and overran the country looting and pillaging. When they reached Clusium, a city only three days’ journey from Rome, a Roman army led by a praetor appeared on their heels forcing them to turn back and confront it. The two armies camped for the night in close proximity. The Gauls kept their campfires burning, but withdrew their infantry, leaving only their cavalry behind. The horsemen had orders that when the enemy approached, they were to retire toward Faesulae and their infantry, which lay in ambush. At daybreak, the Romans, seeing the cavalry alone and thinking the Gauls had taken to flight, followed the cavalry with all speed. On their approach the Gauls sprang from ambush and attacked them. A stubborn conflict took place, but finally the numbers and courage of the Gauls prevailed. The surviving Romans retreated to a hill, while the Gauls set up a loose blockade. These fugitives would all have been lost, but the consul Aemilius Paullus arrived with a relief army that night. The Gallic kings chose to retreat with their booty rather than fight another battle. They broke camp before daybreak and retreated along the seacoast through Etruria.
The stage is set. The battle lines are drawn and you are in command. The rest is history. 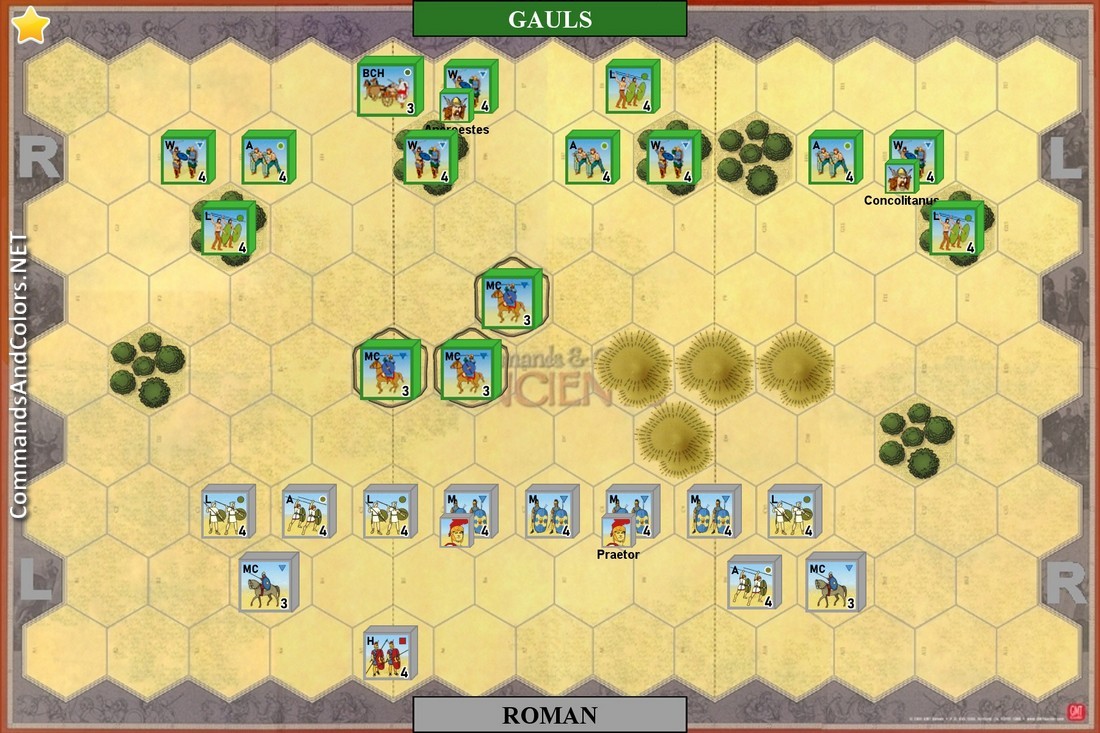 Special Rules
When a Roman unit occupies a Gallic camp hex, it is removed at the Start of the Roman player’s turn. When all three camp hexes are removed, the Roman player gains one Victory Banner.

Barbarian Chariot rules are in effect.

TomKnight3 replied the topic: #4191 11 months 1 day ago
The last game game #4 for the day was against Jonathan. He went first as Gaul and had a mounted charge. We hit my left with all three Cav. units taking out a Cav and a Aux unit. I was in trouble. I decided to move my left to the center and bunch up for protection. I wanted to move everything all to the right and hit his weaker units, but ended up with two and then three cards on the left which were worthless to me. But I also had a rally card which helped later. He came at my mediums in the camps, but I did better after playing the Rally card for a block to the two leaders. I took some risks in follow up and won some banners. I got my heavy in the action and got some good rolls on evades. At the end, he came after another medium with his three Cavs. but it did not work. The last turn of the game, I used a Clash of Shields to roll 7 with my heavies to take out a unit. I won 6-2. In all four games I had a clash of shields, and had two I am Spartacus twice in the four games. Rome wins. We started out 50/50 on the overall games, 78 plays, and after my four wins. It ended up still 50/50 with at a total of 82 plays after I logged them in. A great but long day, and a good day for all.

TomKnight3 replied the topic: #4190 11 months 1 day ago
After a break to have brownies and tea, we came back to the board. This time I was Roman back in the swivel seat. I decided to push up quickly and take the campus if possible. In game #3 against Don, I was able to get the camps early. Don pushed hard with everything against the camps, but his attacks failed. I was able to take out his three Cav. units first. I got the camp banner, took out the light chariot and another unit to win 6-0. I had great rolls to win game three of the day.

TomKnight3 replied the topic: #4189 11 months 1 day ago
In the #2 game I played Jonathan. Again I was Gaul, swiveling back from the other board. This game had more drama, as we had the leaders fight on the mountain range. I won the battles on the mountain and broke the Roman push. My leader took some gambles and won. I also had some really good rolls with my Cav. units. I won this one 6-3 again as the Gauls.

TomKnight3 replied the topic: #4188 11 months 1 day ago
We played four games today. I was in a swivel seat playing two people at once. Play a turn, swivel, play a turn swivel back. I was playing Gaul first on both boards. In game #1 with Don, I won 6-4. Honestly, after playing four games total I don't remember much about this game. He did win the banner for taking the camp.
GF1954 replied the topic: #3677 2 years 2 months ago
2 solitaire, with both sides winning once.
Valvorik replied the topic: #2070 5 years 7 months ago
Thought I had posted this but don't see it.

I enjoyed this one (solo) very much. The camps and hills made for interesting tactics.
Read More...