Historical Background
Defeat for Carthage in the First Punic War resulted in the loss of Sicily to Rome, and the burden of a heavy indemnity. This disaster was quickly followed by a major rebellion in North Africa. Carthage was unable or unwilling to pay their former mercenaries backpay and so the mercenaries revolted. Many Libyans, discontent with the high taxes they had paid to fund the ill fated Carthaginian war effort, also joined the revolt. The subsequent fighting, known as the Truceless War, was eventually won by Carthage under the leadership of Hamilcar Barca. During the war Rome had taken the opportunity to annex Sardinia and Corsica from Carthaginian rule. Hamilcar, furious at Roman duplicity and eager to restore his nation's fortune, embarked on a conquest of Iberia with his veterans of the recent conflicts. Hamilcar took his nine year old son Hannibal with him, after swearing him to a lifelong hatred of Rome. Hamilcar landed at Gades in the Summer of 237 BC. His immediate objective was the subjugation of the powerful but uncoordinated local tribes and the acquisition of their silver mines. The first major encounter occurred in the valley of the Baetis River where a coalition of the Turdetani and Turduli tribes along with Celtiberian mercenaries faced Hamilcar led by the Celtiberian Chieftain Istolatius and his fanatical group of "Soldurri" warriors who swore oaths not to survive their leader. The outnumbered but experienced Carthaginian army halted the initial Iberian charge with their elephants and phalanx. The Carthaginian cavalry then routed the Iberian wings and attacked into their flanks. Istolatius died fighting with his Soldurri and the surviving Iberians fled. Hamilcar was able to capture the silver mines and phase one of his conquest was complete.
Based on the GBOH scenario "The Battle of Baetis River" by Carlos Ibanez.
The stage is set. The battle lines are drawn and you are in command. Cna you change history? 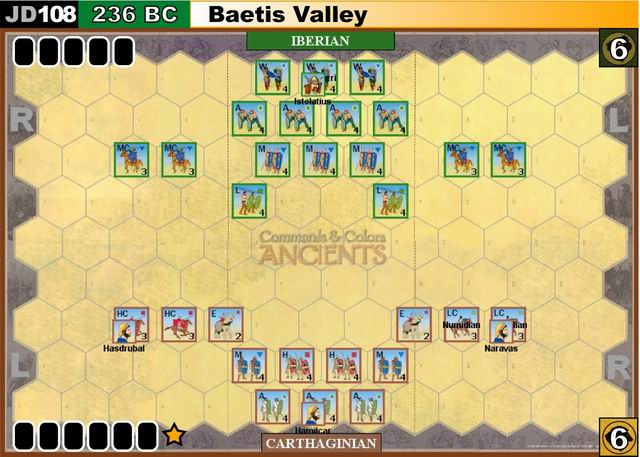 The Iberian auxilia infantry units may not use missile fire.

Fright at First Sight: Any Iberian infantry unit in close combat with an elephant unit may not ignore any flags rolled by that elephant unit, even if the unit has an attached leader or is supported by two adjacent friendly units.