Historical Background
After Hannibal had suppressed the Iberian tribes north of the Ebro River in Spain, he marched his army of 38,000 infantry, 8,000 cavalry and 37 elephants through southern Gaul towards Italy. The Only serious opposition he encountered was when he reached the Rhone River. Here, the local Gallic tribe of the Volcae had occupied the eastern bank and were prepared to contest his crossing.
For the crossing of the wide Rhone, Hannibal had his men collect boats and build rafts. He also dispatched Hanno with a force of infantry and cavalry to cross the river further north and outflank the Gauls. He instructed Hanno to give a signal when he was in position to attack the rear of the Volcae. Upon receiving a smoke signal from Hanno, Hannibal ordered the crossing to begin. The Volcae initially fought the Carthaginians as they landed but gradually Hannibals' troops established a foothold and when Hannos' men attacked them from behind, along with setting fire to their camp they broke and ran.
Hannibals army, including his elephants, had all crossed the river by the next day. On learning of the approach of a Roman army under Publius Scipio from Massilia (Marseille) Hannibal broke camp and headed north to his destiny across the alps. Publius dispatched his army under his brother Gnaeus Scipio to Spain and victory at the battle of Cissa while he returned to Italy and to defeat at the Ticinus River. The 2nd Punic war had begun.
The stage is set. The battle lines are drawn and you are in command. Can you change history? 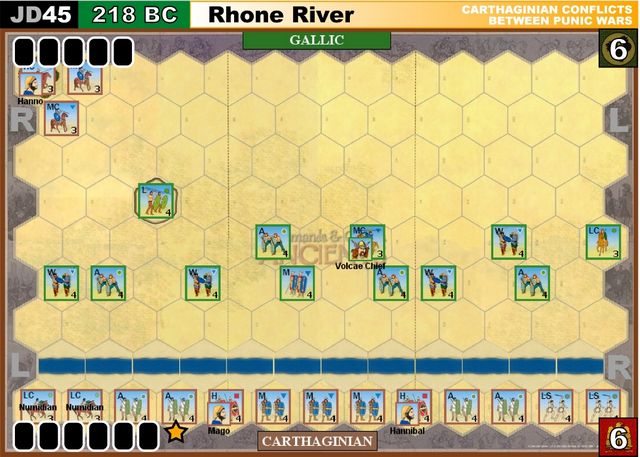 Special Rules
The River (Rhone) is fordable but no Gallic unit may enter a river hex.

If a Carthaginian unit ends its turn on the camp hex the camp tile is removed (the camp is set on fire), and the Carthaginian player gains 1 victory banner.

Hanno and the 3 units in and adjacent to his hex may not be attacked until at least one of them has been ordered.