Historical Background
Following his victory over the mercenaries and revolting Africans in the Truceless War, Hamilcar Barca embarked on the conquest of Spain. His aim was to replace the territories of Sicily, Sardinia. The first of these had been lost to the Romans in the 1st Punic War, and the second had been appropriated by the Romans, against the terms of their treaty with Carthage, during the Truceless War. Spain would also provide a base for future land operations against Rome as the Romans now dominated the traditional province of the Carthaginians, the sea. Hamilcar had a lot to hate the Romans for and he loathed them with a passion. A Passion that he passed on to his three sons, Hannibal, Hasdrubal and Mago who would all go on to invade Italy from Spain in the 2nd Punic War.
Hamilcar was very successful in Spain until he was killed in battle by the Iberians in 229 BC. Hasdrubal the Splendid took command in Spain with the young Hannibal as his chief lieutenant. Hasdrubal was assasinated by a Celt in 221 BC and so Hannibal, who had proved himself on many occassions, became the new commander in chief at the age of 25.
Hannibal first defeated the Olcade and Vaccaei tribes. The only significant tribe now left south of the Ebro River were the Carpetani and they were easily convinced by the Olcade and Vaccaei remnants that they would be next. The combined Iberian army chased Hannibal, laden with booty from his triumphs, south towards New Carthage. Hannibal, realising he could not outrun his pursuers and reluctant to give up his hard won gains, feigned a hasty retreat over the Tagus River but cunningly (the Romans would say treacherously) left his best troops to his rear. As the Iberians poured across the river, Hannibal turned his army and slaughtered his enemy in their confused crossing, with some over the river, some struggling through it and many on the far bank unable to help.
This victory completed Hannibals conquest of Spain south of the Ebro River. In 219 BC Hannibal laid siege to the Roman colony of Saguntum which lay in Carthaginian territory and its conquest after an eight-month siege led to the outbreak of the 2nd Punic War.
The stage is set. The battle lines are drawn and you are in command. Can you change history? 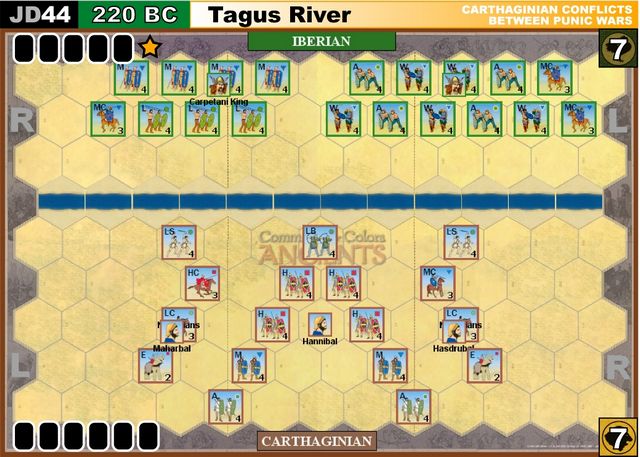 Iberian Auxillia units may not use missile fire.

The Carthaginian light cavalry units (Numidians) may ignore one crossed sword and one retreat banner result.

The Iberian player must end their turn from their turn 3 onwards with a unit on the South side (towards the A hex row) of the river or the Carthaginian player gains a victory banner each turn the requirement is not met.

NOTE:- The Iberians think the Punic army is in headlong retreat and they are desperate to catch and butcher them.