Down to the River: The Death of Hamilcar 229 BC

Scenario Notes: This scenario covers a semi-mythic historical event—the death of Hamilcar Barca, father of the famous Carthaginian general Hannibal, in 229BC. He probably died at the hands of the Spanish tribesmen he was attempting to subdue, although some other stories state that he was swept away in a swollen river, or that he sacrificed himself so that his sons Hannibal and Hasdrubal, who were mere teenage boys at the time, could make their escape. Anyway its all good hand to hand fodder for a special scenario situation of C&C Ancients. Since this action is more in the nature of a large skirmish, or ambush the command cards are not utilized—instead each player rolls one ordinary dice, typically at the start of each player-turn to see how many units/leaders can be ordered—see details below in the Command rules section.

Historical Background
“At the end of this (Mercenary or ‘Truceless’) war, Hanno was recalled to answer certain charges against him in Carthage, and Hamilcar was left in sole command of the army. He associated his son-in-law Hasdrubal with him, crossed the straits to Gades and began to plunder the territory of the Spaniards, although they had done him no wrong. Thus he made for himself an occasion for being away from home, and also for performing exploits and acquiring popularity. For whatever property he took he divided, giving one part to the soldiers, to stimulate their zeal for future plundering with him. Another part he sent to the treasury of Carthage, and a third he distributed to the chiefs of his own faction there.” “This continued until certain Spanish kings and other chieftains gradually united and put him to death in the following manner. They loaded a lot of wagons with wood and drove them in advance with oxen, they following behind prepared for battle. When the Africans saw this they fell to laughing, not perceiving the stratagem. When they came to close quarters the Spaniards set fire to the wagons and drove the oxen against the enemy. The fire, being carried in every direction by the fleeing oxen, threw the Africans into confusion. Their ranks being thus broken the Spaniards dashed among them and killed Hamilcar himself and a great many others who came to his aid”…..(From the Histories of Arrian) 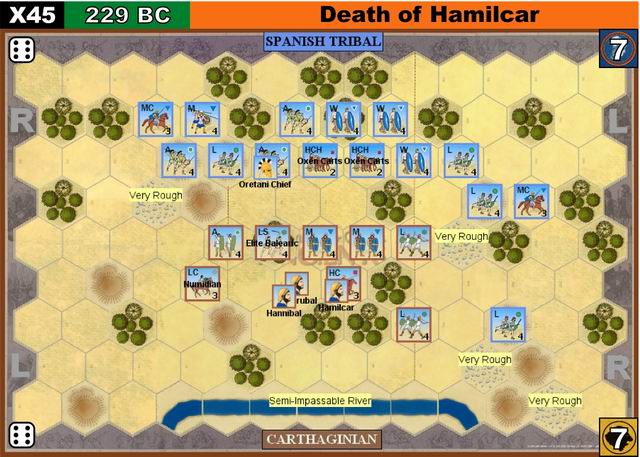 Special Scenario Rules
Command Rules & Hamilcar’s Sons:
Command Rules:
Leaders can only support in close-combat units they are attached to—Hamilcar may cancel a retreat and a sword hit on the unit he is attached with—the Spanish chief a retreat or a sword hit only. Hamilcar and the Barca sons may only move a maximum of TWO hexes when ordered to move alone without the attached unit and may only evade a maximum of one hex unless evading through enemy units (they then evade up to one hex beyond the enemy unit). The Barca sons provide no support or advantage to the Carthaginian unit(s) they are stacked with—save if Hannibal is present without Hamilcar in the hex he may cancel a retreat or a sword hit on the unit (Hannibal was only 18 at the time and Hasdrubal was even younger). Barca sons cannot halt the retreat of a unit that passes through their hex.. A maximum of TWO Carthaginian Leader/Barca Sons may be stacked in a single hex with, or without a Carthaginian unit. Up to two such Leader/Barca Sons may be attached to a single Carthaginian unit. If the rules call for a Leader loss check on the hex and two Carthaginian Leader/Barca sons are present one loss check is made for each.

Spanish Tribal & Carthaginian 1st Player-Turns Ambush Rules:
On the very first Spanish Player Turn that player may order the two oxen wagon units and up to three other units (including the attached chief leader if that Auxillia unit is ordered). The Spanish Medium Cavalry may not be ordered on Spanish Turn 1. Spanish units/leaders (including the oxen wagons) ordered on Turn 1 may also be ordered on Turn 2 thereby showing the shock effect of what is essentially an ambush.
On the very first Carthaginian Player Turn that player may order any two units, but may not order any Carthaginian Barca son or Hamilcar or the Carthaginian Heavy Cavalry unit.
Note that no die roll is made to determine the number of orders available to order leaders/units on each Player-turn 1 for either side. The die rolling for orders starts only on the second player-turn for both sides.

Special Terrain Rules:
Semi-impassable & Swollen River Hex Tiles: The River Tiles cannot be retreated or evaded into by any unit or leader/Barca son. No Spanish unit/leader may ever enter or advance into such hexes—although they could close-combat attack into such hexes at -1 normal dice, or missile fire normally Only Carthaginian Leader/Cavalry units/Barca sons can be ordered in their player-turn to enter such hexes and such units may only be ordered in from an adjacent to that river tile move starting hex. Upon an ordered initial entry into the river hex immediately roll one die per unit/personage to see if the Leader/Cavalry units/Barca sons drowns—(eliminated)--Hasdrubal drowns on a “4-6” Hannibal & Hamilcar on a “5-6”. For cavalry units; “1” lose no blocks “2-4” lose 1 block drowned “5” lose two blocks drowned “6” unit wiped out (eliminated). Carthaginian units located in a river hex may not close-combat, missile-fire or battle-back or conduct an ordered move to another river hex. Carthaginian units located in a river hex may exit the map. Carthaginian Leader/Barca sons/cavalry units located in a river hex may not conduct an ordered move to another river hex.
“Very Rough Ground”: Foot units & Leaders/Barca sons must cease moving when entering Broken Ground hex tiles in the scenario—but may attack/battle-back if units using the normal Broken ground rules. Cavalry units may not enter/evade or close-combat attack or retreat into such hexes, they may battle-back or missile fire into such hexes.

Exiting the Map: (Carthaginian Player ONLY):
Carthaginian units/personages that are eligible to be ordered & are located on the Carthaginian map edge at the start of their player-turn from A1 to A13 may be ordered to exit the map and permanently leave the scenario. Conduct such orders just as if the unit/personage was taking a normal move (including expending order(s)) and remove them from the map—they are not considered eliminated and may score victory Banners. Carthaginian personages that evade successfully off the map are not considered eliminated and score normal Banners as if they exited. Flagged Retreats after a close combat off-map are not permitted—resolve with the normal rules.
Hamilcar may not voluntarily exit the map (although he could be forced off in an evasion) if, in doing so, he would leave behind on the map a Barca son or more than two Carthaginian units still on the map at the end of that Carthaginian Player-Turn.