Hannibal vs The Celtiberian Tribal Alliance

Historical Background
“Next summer he (Hannibal) made a fresh attack on the Vaccaei, assaulted and took Hermandica at the first onset, but Arbacala being a very large city with a numerous and brave population, he had to lay siege to it and only took it by assault after much pains. Subsequently on his return he unexpectedly found himself in great peril, the Carpetani, the strongest tribe in the district gathering to attack him and being joined by the neighbouring tribes, all incited to this by the fugitive Olcades, and also by those who had escaped from Hermandica. Had the Carthaginians been obliged to meet all this host in a pitched battle, they would assuredly have suffered defeat; but, as it was, Hannibal very wisely and skilfully faced about and retreated so as to place the river Tagus in his front, and remained there to dispute the crossing, availing himself of the aid both of the river and of his elephants, of which he had about forty, so that everything went as he had calculated and as no one else would have dared to expect. For when the barbarians tried to force a crossing at various points, the greater mass of them perished in coming out of the river, the elephants following its bank and being upon them as soon as they landed. Many also were cut down in the stream itself by the cavalry, as the horses could bear up better against the current, and the mounted men in fighting had the advantage of being higher than the unmounted enemy. Finally, Hannibal in his turn crossed the river and attacked the barbarians, putting to flight a force of more than one hundred thousand. After their defeat none of the peoples on that side of the Ebro ventured lightly to face the Carthaginians, with the exception of the Saguntines. Hannibal tried as far as he could to keep his hands off this city, wishing to give the Romans no avowed pretext for war, until he had secured his possession of all the rest of the country, following in this his father Hamilcar's suggestions and advice.” (Polybius Book 3) 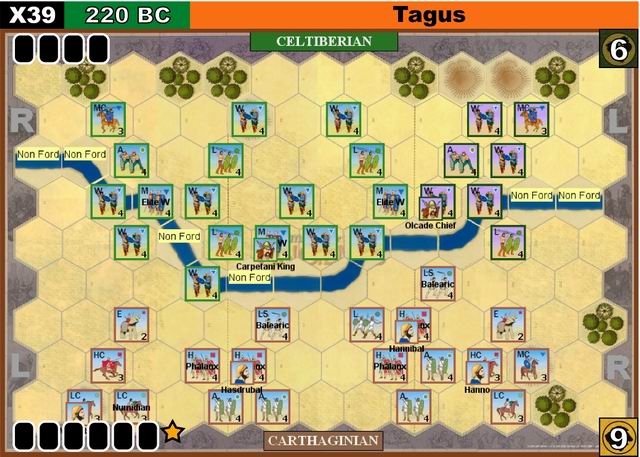 Special Rules:
Command:
A Leader attached (stacked with) a friendly unit may cancel one sword hit on the unit in lieu of canceling a retreat hit.
Hannibal may cancel both a sword and a retreat hit if stacked with a friendly unit.
A unit involved in close combat with the support of a Leader may only count one helmet hit amongst those rolled to inflict a hit on an opposing unit—Exception: Carthaginian units supported by Hannibal may count up to two helmet hits.

Special Terrain Rules:
Fordable River Hexes: Units in a Fordable River hex have a “normal” maximum of three dice in close-combat and battle-back. Carthaginian Cavalry units attacking in close-combat (not battle-back) from a clear hex to a river hex do so at +1 normal dice. Note that units attacking, or battling back into a fordable river hex from a non-river hex in this scenario suffer NO penalty whatsoever, and in the case of the Carthaginian cavalry do so at a bonus when attacking.

Celt-Iberian Alliance Troops Special Rules:
Celt-Iberian Elite Warriors: All Celtiberian Medium Infantry units are treated as Warriors for all purposes, they are Elite Warriors—in addition they receive one extra dice (and this can be +1 dice above any terrain considerations) the very first time in the scenario they battle back or engage in close combat as long as the unit still has three or more blocks at the instant it rolls in either close-combat or battle-back
Celt-Iberian Auxillia: Celt-Iberian/Olcade Auxillia retreat 2 hexes per flag result taken.
Inter-Tribal Non-cooperation: The Olcade Chief/Leader may never enter voluntarily a hex containing a non-Olcade unit, or support, rally, or help in any way a non-Olcade unit in battle. Note that all the Olcade units and the Olcade Leader start the scenario initially only in the left-flank section of the Celtiberian Alliance host.
The Carpetani King/Leader may never enter voluntarily a hex containing an Olcade unit, or support, rally, or help in any way an Olcade unit in battle.
Olcade and non-Olcade units may never be ordered by the same card play by the Celt-Iberian Player. Note that all the non-Olcade units and the Carpetani King/Leader start the scenario initially in the right-flank, and center sections of the Celtiberian Alliance host only. This rule may prevent some units from being ordered by a particular card play-in that case only units from one group are ordered per the card-the other possible orders are lost and not used.
Celt-Iberian Alliance and Line Commands: No more than 4 foot units can be ordered by a Line Command card played by the Celt-Iberian player, and the units ordered (as noted above) may not be a mixture of Olcade and non-Olcade units.

“Barbarian Balk”: If a Warrior unit (of whatever type) moves 2 hexes (or 3 hexes using “Double Time”) to a hex adjacent to a Carthaginian unit(s) to close combat it and then is unable to do so due to the Carthaginian unit(s) being retreated or eliminated by other attacks, the Celtiberian Alliance unit has failed its requirement to close-combat attack given the length of its pre-combat move.
Such units that fail to attack are said to have “balked”—immediately retreat Warrior units in such a situation one hex once all Celtiberian Alliance close combats are finished. The one hex “Barbarian Balk” retreat is conducted in the normal fashion just as if the unit was forced to retreat one hex after a battle—and it is not optional and cannot be canceled in any way—even by the presence of a leader.

“Barbarian Rush”: Limits to Celtiberian Alliance Momentum Combat: Warrior units, regardless of type or tribe, reduced to one or two blocks May Not Engage in momentum combat unless a friendly leader is attached to the unit in question.