Historical Background
The Seleucid King Antiochus III desired to aquire the long disputed territory of southern Syria (Coele-Syria) which had been occupied for many years by the Ptolemaic empire. Antiochus raised a huge army of 62,000 foot, 6,000 horse and 102 elephants and marched towards Egypt. Ptolemy IV responed with an army of 70,000 foot, 5,000 horse and 73 elephants. The two armies met at Raphia near the Egyptian border and the stage was set for one of the largest battles of the Hellenistic period. Both armies deployed in a traditional fashion with the heavy phalanx in the centre flanked by lighter troops and with cavalry and elephants on the flanks. Antiochus routed the Ptolemaic left wing, while the Ptolemaic right wing returned the favour. This left the two phalanxes to fight it out and it was expected that the more experienced Seleucids would prevail, especially as Ptolemy had made up a large proportion of his phalanx with newly trained Eqyptians. However, whilst Antiochus had pushed his pursuit of the defeated enemy cavalry so far that he was unable to return to the battle in time to influence it, Ptolemy had moved into the centre to inspire his phalanx to victory. The Seleucid army collapsed and lost 14,000 men killed or captured compared to only 2,200 for Ptolemy.
NOTE:-The orders of battle and set up are based on the GBoH module 'War Elephant'.
The stage is set. The battle lines are drawn and you are in command. Can you change history? 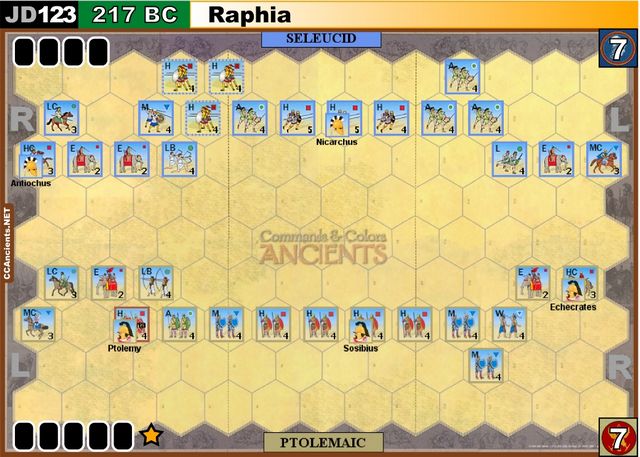 The Agema is a special unit that uses the same rules as the Silver Shields. Represent this unit with Carthaginian heavy infantry blocks.