Historical Background
The old rivalry between the Ptolomaic and Seleucid empires was stirred up by Ptolemy VI Philometer of Egypt when he backed a pretender to the Seleucid throne, Alexander Balas, against the unpopular Demetrius I. In 150BC Alexander defeated and killed Demetrius in battle, murdered his heir Antiochus and took his throne in Antioch. Demetrius' second son, the young Demetrius II in safety in Caria, together with money and loyal followers of his father, began to recruit an army of mercenaries from Caria, Ionia and Crete under the leadership of Lasthenes. Alexander called on his benefactor Ptolemy, who led a large army from Egypt towards Syria. Ptolemy claimed that Alexander's chief minister Ammonios had attempted to kill him, and demanded he be handed over for execution. Alexander refused and Ptolemy switched sides to Demetrius. The Author John D. Grainger believes that the assasination plot may have been invented by Ptolemy to cause the rift as perhaps Ptolemy perceived Demetrius as the weaker of the two parties and therefore more amenable to Egyptian demands for the control of Coile-Syria. The two armies met just north of Antioch on the banks of the river Oenoparas. Alexander was defeated and fled to Arabia where he was murdered by his former officers. Ptolemy was severely wounded during his victory and died a few days later leaving Demetrius in control of the Seleucid empire. The empire had been severely weakened in the east however with the advance of the Parthians during the crisis. Alexander had not acted to prevent this either through his supposed indolence or more likely through his inability to campaign to the east while Demetrius was a threat in the west.
The stage is set. The battle lines are drawn and you are in command. Can you change history? 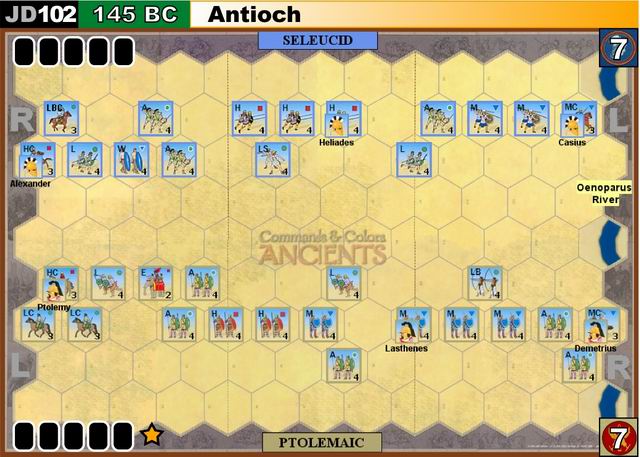 Special Rules
The river (Oenoparas) is not fordable.

ANTIOCH – 145BC
Not much is known about this other than there was a battle between Ptolemy VI and Demetrius II, and Alexander Balas somewhere near Antioch. We know that the battle occurred near the river Oenoparus so that is popped in on one side. It could easily have been on the other side or not on the map at all, but as it does get a mention in our sources I felt it should be there, and it doesn’t play a major role as it only occupies 3 hexes. The Ptolomaic army has two elements. The first is the army that Ptolemy brought from Egypt. This is mostly based on the Scenario X listing so was very simple. Elephants have been chosen over chariots as the sources say that Demetrius stole the elephants of Ptolemy after he died. The army of Demetrius is a Greek mercenary force and therefore is made up of medium infantry (hoplites), light bowmen (Cretan archers), Auxilliaries (Peltasts) and Light (Tarentine style) cavalry. Alexanders’ army is my best guess at a Seleucid army of this time. Macedonian settlers from Syria (heavy infantry), Royal cavalry (heavy cavalry), Greek and Galatian mercenaries (medium inf, warrior inf and med cav), and various troops from the empire (the rest).