Historical Background
Seleucid ambitions to occupy Coile-Syria, dashed at the battle of Raphia, were revived by Antiochus III (The Great). He was met by a Ptolemaic army led by Scopas, a former Aetolian general, in the Golan heights foothills near the village of Panion. Scopas short of his Egyptian phalanx due to the ongoing problems of the Egyptian revolt hoped to catch Antiochus in the hills so as to negate his heavy phalanx advantage. The author Bar-Kochva beleives this battle was fought on two adjacent sites divided by the precipitous banks of the River El-Banyas near the village of Panion. The majority of troops led by the two commanders occupied the northern Banyas plateau. The rougher southern plateau was guarded by Antiochus' elder son to prevent the capture of Panion and subsequent outflanking of his main army. Despite some success for Scopas by his Aetolian Greeks in the south, which he rushed to reinforce, in the north the Ptolemaic left flank was crushed by the charge of the Seleucid heavy cavalry led by Antiochus' youngest son and the centre was overun by the Seleucid elephants. The northern troops having been abandoned by scopas were mostly destroyed and Scopas retired with his remaining troops to Sidon. By this battle Antiochus regained Coile-Syria, but he would soon encounter problems with the Romans which would lead to the battle of Magnesia.
The stage is set. The battle lines are drawn and you are in command. Can you change history? 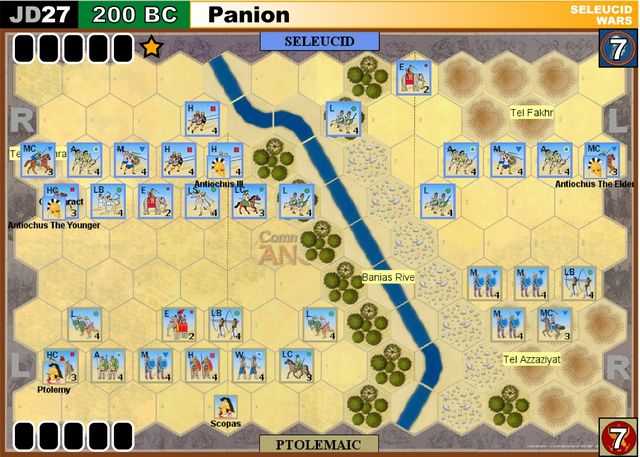 During the battle (according to Bar-Kochva) Scopas moved from the left to the right Ptolemaic wing in order to try and win a victory in that sector and thus outflank the Seleucid phalanx. If Scopas is ordered when he is on an A row hex from 1 to 7, he may be picked up and placed in hex A12 or 13 if they are free of enemy units. He may then carry out his order from this new location.