Historical Background
Antiochus III went east with a large army to bring the former Seleucid eastern provinces back into the imperial fold. Bactria had claimed independance since 250 BC and was now ruled by Euthydemus, a Greek from Magnesia, who had deposed the rebellious leaders.
Euthydemus set out for the River Arius with 10,000 cavalry and he posted scouts to watch the ford. Antiochus approached the river at night with an advanced force of 12,000 of his best cavalry and infantry along with some light troops. In the morning the Bactrian scouts found that the Seleucids had already begun crossing the river and they were beaten off by Antiochus leading his Royal Guard cavalry. However, the arrival of the now alerted Euthydemus with the rest of his cavalry put Antiochus in great danger of being overwhelmed. He fought bravely, having his horse killed and some teeth koncked out. The battle turned when Panaetolus brought forward the infantry and routed the Bactrian cavalry.
Euthydemus fled to his capital where he endured a 2 year siege before finally offering terms to Antiochus. He would submit to Seleucid rule provided he remaind King. Antiochus decided it would be advantageous to have a friendly Greek ruler to act as a buffer for the empire against the barbarians beyond his borders, so he accepted peace along with a gift of the Bactrian elephant corps.
The stage is set. The battle lines are drawn and you are in command. The rest is history. 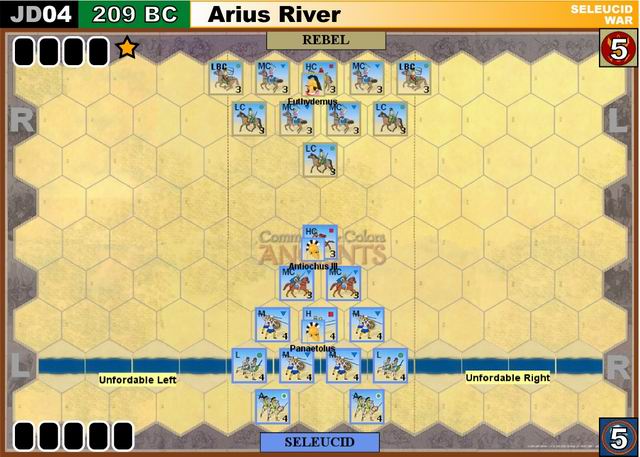 Special Rules
The River is only fordable in the central section.