Historical Background
Molon was the Seleucid ruler of the Median Satrapy. He rose in rebellion against the new young Seleucid King Antiochus III. He defeated the army of Xenoetas, that had been sent against him, on the Tigris river and proceeded to conquer Babylon. Antiochus took his own army to deal with Molon, and on the advice of Zeuxis he cut off his line of retreat back to Media at a mountain pass near Apollonia. According to Polybius the battle turned badly for Molon when his left wing, under his brother Neolaus, defected to the Seleucids on sight of the King. Molon's own flank was surrounded and with his whole army collapsing he killed himself to avoid capture. The author Bar-Kovchva beleives that this was a version of events spun to flatter the King, as the rebel left wing troops of Median and eastern descent would have had no great affection for a Hellenistic king. He believes that it was the sudden appearance of reserves that Antiochus had posted behind each wing that caused the collapse.
The stage is set. The battle lines are drawn and you are in command. The rest is history. 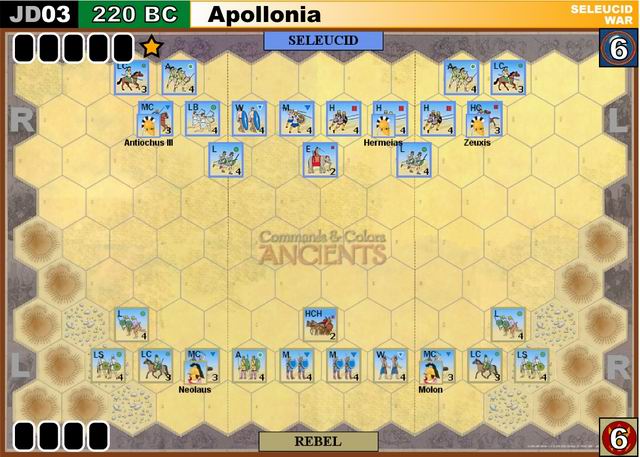