Historical Background
The Romans are on the verge of defeating Carthage and ending the First Punic War. Regulus and a veteran Roman army landed in Africa, and, though woefully short of cavalry, defeated several Carthaginian forces. Desperate, the Carthaginians turned to an otherwise unemployed Greek general named Xanthippus, who knew how to train and command an army, as well as how to put the Carthaginian advantages in mounted troops into use. The Carthaginian army marched into the Bagradas Valley and Regulus, confident of yet another victory, offered battle. It was to prove a costly mistake for him. The Carthaginian cavalry and elephants routed the Roman cavalry and then turned on the flanks and rear of the Roman army, now fully engaged with the Carthaginian infantry. The Roman army disintegrated. Those who survived told of the horror of being overrun by elephants and cavalry. This Carthaginian victory prolonged the war. It took several years before any Roman army would stand and fight against elephants. The larger lesson—proper employment of a combined arms army over a largely infantry army resulting in victory—was lost on the Romans. They had to re-learn it at the Trebbia, Lake Trasimenus, and Cannae.
The stage is set. The battle lines are drawn and you are in command. Can you change history?

esparver73 replied the topic: #3325 2 years 7 months ago
Both armies clashed on the flanks with the Carthaginians winning on their left and a tie on their right. In the center both sides pushed hard with heavy infantry but they did not meet, each one attacked light units in front of them, scattering them. Then the African elephants entered the battle destroying many units but the Romans used every opportunity to attack lone units. The score was even during all the battle with a final Roman victory 14-12.

mk20336 replied the topic: #2354 4 years 10 months ago
Very interesting game, tense with strange turns of fate.
Marcin (stormwalker) played as Romans, Lukasz as Overall Commander for Carthaginians and me as Left Field Commander for Lukasz.

Initial attack with light troops in center scared like hell all the elephants and there were some casualties. However, Carthaginians then started to play much more actively on wings which was right choice - Romans were more and more "enveloped" and endangered.

And then most bizarre moment of game came. My 1-block elephant was cut off from retreat by 4-block AUX and 3-block MC. Marcin rolled two flags => two blocks in each of the units were smashed and then Marcin rolled two greens on AUX on rampage. Full 4-block AUX unit with leader was destroyed in unfortunate attack!

At this moment in time Romans collapsed and result changed from 6-9 to finally 14-10. 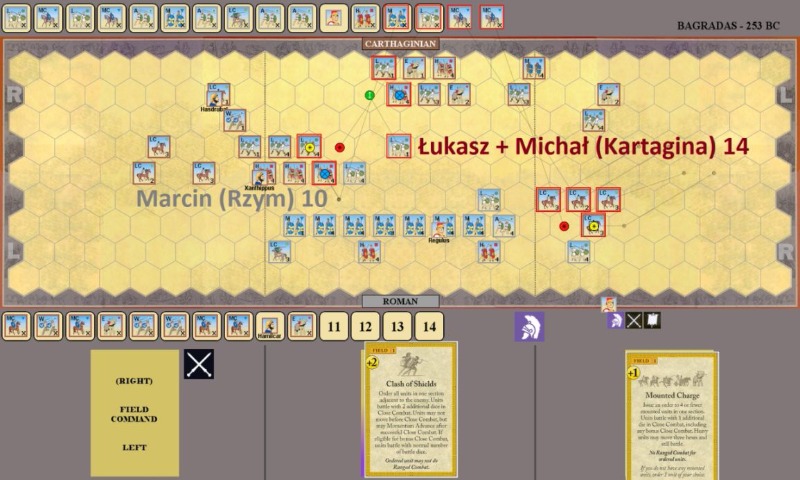