Historical Background
“The next day Appius was greatly encouraged when he learned the outcome of the (1st) battle (against the Carthaginian ally Hiero who had withdrawn back to Syracuse) and decided to attack the Carthaginians without delay, He ordered his troops to stand to at an early hour and at first light led them out to battle. He engaged the enemy, killed large numbers of their troops, and forced them to retreat in disorder to the towns in the vicinity. These successes enabled him to raise the siege of Messana and then to move over to the offensive, ravaging the territory of the Syracusans and their allies and scouring the country without meeting any resistance.”
(From Polybius ‘The Rise of the Roman Empire’ Book I Chapter 12)

“It would only have been natural for Appius Claudius to turn his attention to the Carthaginians and here Zonaras may preserve the truth. He says that the Carthaginian position was on a kind of peninsula, with the sea on one side and marshes on the other, and that they had fortified the narrow neck of the peninsula. Appius Claudius tried to force his way through, but had to retreat, thereupon the Carthaginians foolishly sallied out, only to be driven back in turn with heavy losses…Zonaras adds that the Carthaginians subsequently did not venture to leave camp while Claudius was in Messana and perhaps we should assume that their forces were soon evacuated, possibly after they had learnt of Hiero’s withdrawal, and dispersed among various towns as Polybius says…”
(From The First Punic War by J.F. Lazenby page 51) 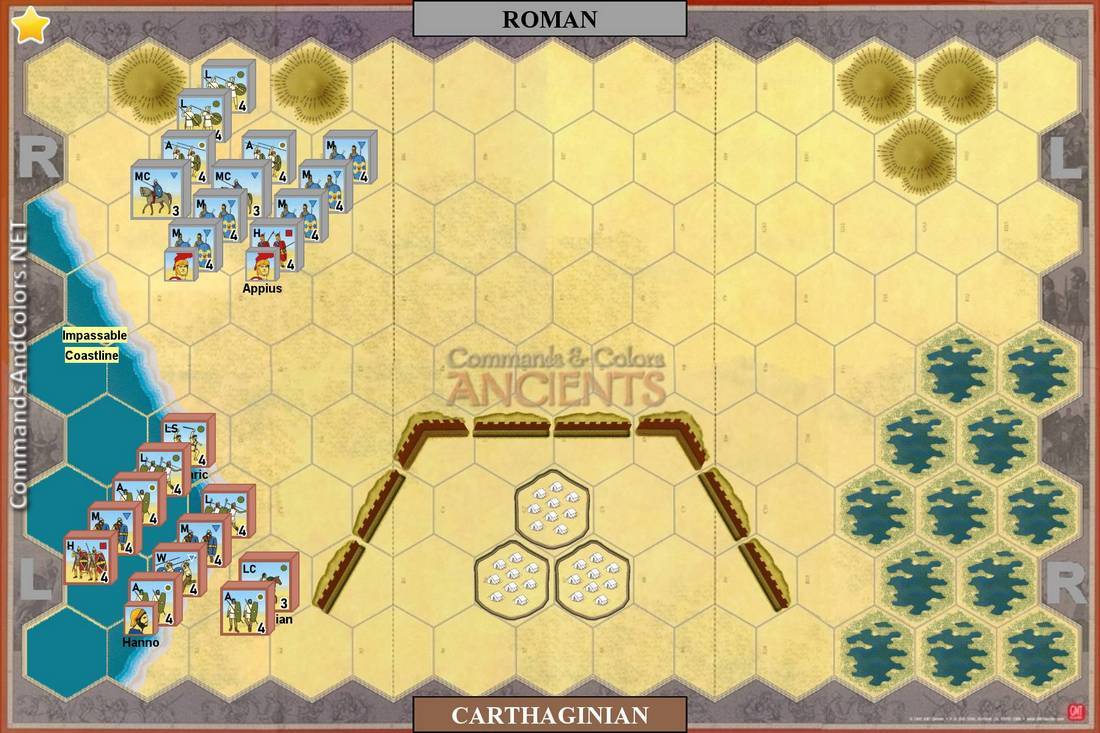 Victory
5 Banners (scored normally)
However the Romans get one Banner if they have a unit occupying a Carthaginian Camp hex—to a maximum of one Banner total scored in this way—if their unit is driven out of the camp hex or otherwise moves out they lose the banner—unless they have another unit occupying a different camp hex at the same time.

Special Rules
Command
A Leader attached (stacked with) a friendly unit may cancel one sword hit on the unit in lieu of canceling a retreat hit. A unit involved in close combat with the support of a Leader may only count one helmet hit amongst those rolled to inflict a hit on an opposing unit, however if Appius is supporting the unit up to two helmet hits may be counted.
Special card Command Rules: The Carthaginian Player starts with a 2-card hand—he draws an extra card at the end of his 2nd & 4th Player-turns bringing his hand size to first 3 cards and then to 4 cards for the remainder of the scenario. A maximum of six foot units can be ordered by play of a single Line Command Card in the scenario.

Special Terrain Rules:
Units in the Carthaginian Camp hexes gain no advantage or dis-advantage in combat. Camp hexes DO block line of sight for Missile fire however.

Special Troop Types:
Balearic Slingers: The Carthaginian Slinger unit hits on ‘swords’ when missile firing at enemy light troops, or when battling back only if attacked in close-combat.
African Horse: The Carthaginian Light Cavalry unit retreats only two hexes per Flag result taken or inflicted on it.