Historical Background
“Even after long consideration, the (Roman) Senate did not approve the proposal to send help to Messana; they took the view that any advantage which would result from relieving the place would be counterbalanced by the inconsistency of such an action. However, the people who had suffered grievously from the wars that had just ended and were in dire need of rehabilitation of every kind, were inclined to listen to the consuls. These men, besides stressing the national advantages I have already mentioned which Rome could secure if she intervened, also dwelt on the great gains which would clearly accrue to every individual citizen from the spoils of war, and so a resolution for sending help was carried. When his decree had been passed by the people, one of the consuls, Appius Claudius, was appointed to command the expedition, and was given orders to cross to Messana.”
“After this the Mamertines, partly through threats and partly by spreading false information, contrived to persuade the Carthaginian commander (Hanno), who had previously established himself in the citadel (of Messana), to move out; they then invited Appius to enter and handed the city over to him. The Carthaginians crucified their general for what they regarded as cowardice and lack of judgement in leaving the citadel. They then stationed their fleet near Cape Pelorias and used their land forces to press the siege vigorously from the direction of Suneis. At this point it seemed to Hiero that the moment had come for the barbarians who had occupied Messana to be driven out of Sicily once and for all, so he formed an alliance with the Carthaginians, marched out of Syracuse, and advanced upon Messana. He pitched his camp near the mountain of Chalcidicus on the opposite side to the Carthaginian lines, and so cut this route of escape from the city as well.”
“Meanwhile Appius, the Roman consul, performed the dangerous operation of crossing the straits by night and making his way into Messana. But he found that the enemy were pressing the siege vigorously from all sides, and since he considered it both dangerous and humiliating for him to be encircled in this way with the enemy in control equally of the sea and the land, he tried to come to terms with the Syracusans and Carthaginians in hope of taking the Mamertines out of the war. Both sides, ignored his proposals, however, and at length he decided, out of sheer necessity, that he must risk battle and that he would attack the Syracusans first. So he led out the troops and drew them up in battle order, whereupon Hiero eagerly followed suit and engaged him. There was a long and hard-fought struggle, but in the end Appius gained the upper hand and drove the whole of the opposing army back to their camp, after which he stripped the enemy dead and returned to Messana. To Hiero this action gave a foreboding as to how the whole campaign was likely to end, and so he disengaged his troops under cover of darkness and retired with all speed to Syracuse.”
(From Polybius ‘The Rise of the Roman Empire’ Book I Chapter 11)

“Perhaps Appius Claudius did attack Hiero first as Polybius says, but after an indecisive engagement , which both sides claimed as a victory, fell back into Messana. Here Zonaras may well be right in claiming that it was the Roman cavalry that was defeated, but that their heavy infantry prevailed. Syracusan cavalry had been famous since the 5th century, but probably neither their hoplite infantry nor their mercenaries were a match for the legionaries, unless exceptionally well led. As a result, Hiero, realizing what he was up against, and probably as Diodoros says, distrustful of the ease with which the Romans had managed to cross the straits in the face of what should have been overwhelming Carthaginian naval power, withdrew to Syracuse. “…(
From The First Punic War by J.F. Lazenby page 50) 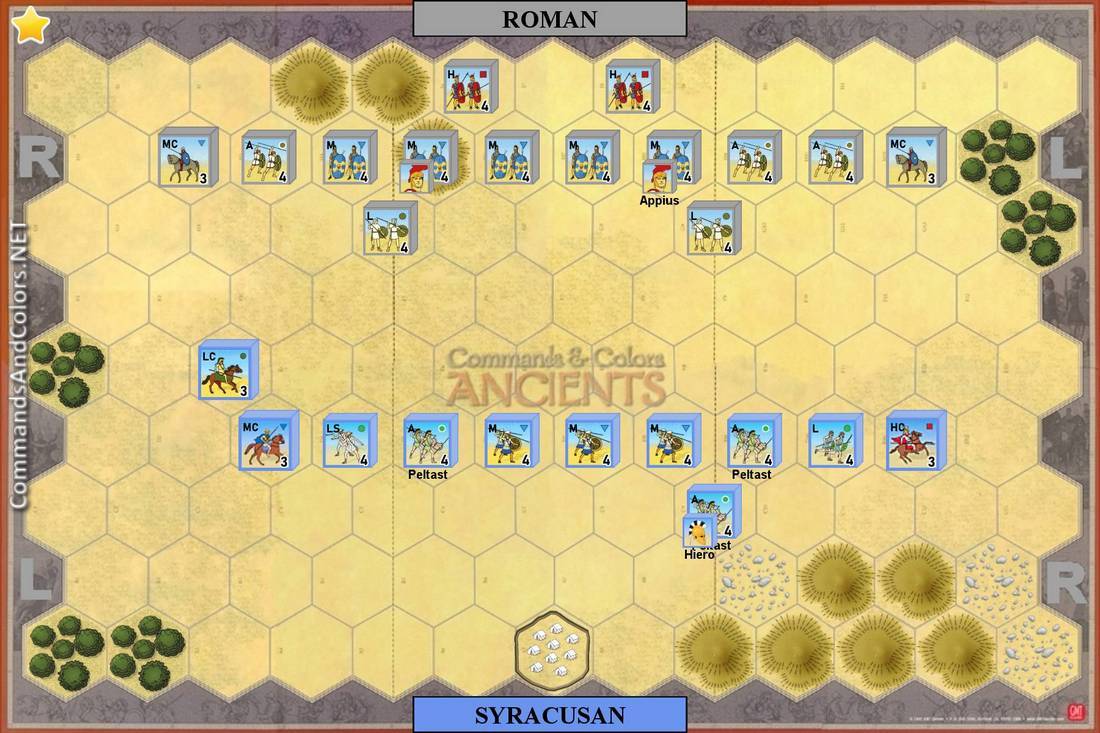 Victory
5 Banners (scored normally)
The Romans, however, receive one banner if the Syracusan Camp hex is occupied by one of their units—if the unit moves off the camp hex—or is forced off they lose the Banner—all other Banners for enemy units/leaders are scored in the normal way

Special Rules
Command
A Leader attached (stacked with) a friendly unit may cancel one sword hit on the unit in lieu of canceling a retreat hit.
Hiero may cancel both a sword and a retreat hit if stacked with a friendly unit.
A unit involved in close combat with the support of a Leader may only count one helmet hit amongst those rolled to inflict a hit on an opposing unit, however if Hiero is supporting the unit up to two helmet hits may be counted.
Special Line Command Rules: A maximum of six foot units can be ordered by play of a single Line Command Card in the scenario.

Syracusan Special Troop Rules:
Peltests: All Syracusan Auxillia are assumed to be Peltests—therefore they are allowed to evade per the normal rules if attacked by Heavy or Medium Infantry only in close combat. Treat as normal Auxillia otherwise.
Elite Slingers: The Syracusan Slinger unit is made up of elite mercenaries. This unit hits on swords when missile firing against enemy light foot. It also hits on swords in battle-back only.
Syracusan Cavalry: ALL Syracusan Cavalry units only retreat two hexes per Flag result inflicted on (or taken voluntary) by them.