Historical Background
The First Punic War began when Rome decided to invade Sicily in 264. Chartage, unprepared, scrambled to raise an army under Hannibal Gisgo. By 262 Hannibal arrived with an advance force at Agrigentum, but the Roman consuls Lucius Postumius Megellus and Quintus Mamilius Vitulus made a preemptive strike and placed him under siege. Months later, Carthage dispatched a relief army of 30,000 foot and 4,500 horse and 60 elephants under Hanno the Elder. Megellus and Vitulus detached about a quarter of their army to guard Hannibal, and brought the remaining 35,000 foot and 3,000 horse onto the field. Hanno organized his army with his mercenaries in the van, his elephants in a second lines and his African levies in a third. As the armies clashed the mercenaries fought fiercely at first, but eventually buckled. As they routed in the line of elephants, all hell broke loose. The elephants were caught in the pandemonium, and began to rampage in all directions. The third Carthaginian line was thrown in confusion, but rallied to resist the advancing legions. After more hard fighting, the Punic army broke. The largest battle of the First Punic War had ended in a decisive Roman victory, but ironically Hannibal’s army was able to escape. Roman losses in the battle and the siege were so heavy that Megellus and Vitulus were denied a triumph, despite their victory.
The stage is set. The battle lines are drawn and you are in command. Can you change history? 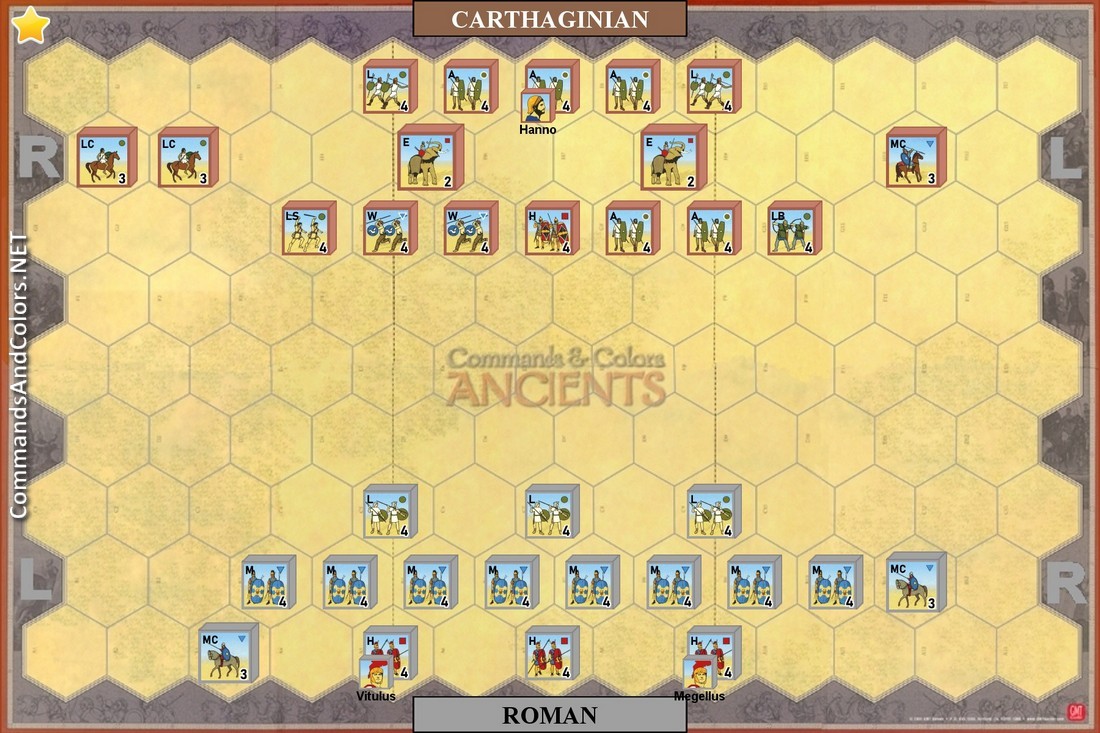 Warboard replied the topic: #3866 1 year 9 months ago
Another, earlier battle from @warboard: Agrigentum 262 BC. The Punic army consisted in this battle of too many light units and could not win the toe to toe combats with the legions, once the main bodies were locked in hostile proximity, after all the elephants were killed. Final blow was delivered by Roman right flank medium cavalry charging deep into the Carthaginian formations, destroying a unit of javeliners.

Warboard replied the topic: #3865 1 year 9 months ago
From Instagram @warboard: Agrigentum 262 BC. Rome is in trouble. Though the elephants are gone now, they caused havoc before finally dispatched and the advancing principes suffered huge casualties, without being able to pin down the mass of light armed Punic infantry. Final attempt by Rome to turn the battle fails catastrophically and the battle is over 7:3. Two Roman leaders with their triarii units charge, but the Punic auxillia unit that was the target survives and one of the triarii units is wiped out in the Carthaginian counterattack.
Read More...