Historical Background
In 146BC the Achaean League rose against the Roman dominance of Greece under their General Critolaus. Critolaus was defeated and killed and the Achaean cause was then taken up by Diaeus. The defeat of Diaeus and subsequent destruction of Corinth marked the end of Greek liberty. The Achaean league was dissolved and much of Greece was incorporated into the new Roman Province of Macedonia. The remaining Greek cities were forbiden to form alliances and were in effect under Roman control. The following overview of the battle is taken from Wikipedia. The Roman consul Mummius, with 23,000 infantry and 3,500 cavalry (probably two legions plus Italian allies) with Cretans and Pergamese, advanced into the Peloponnese against the revolutionary government of the Achaean League. The Achaean general Diaeus camped at Corinth with 14,000 infantry and 600 cavalry (plus probably some survivors of another army beaten earlier).
The Achaeans made a successful night attack on the camp of the Roman advance guard, inflicting heavy casualties. Encouraged by this success they offered battle the next day but their cavalry, heavily outnumbered, did not wait to receive the Roman cacalry charge but fled at once. The Achaean infantry however held the legions until a picked force of 1,000 Roman infantry charged their flank and broke them. Some Archaeans took refuge in Corinth, but no defence was organized because Diaeus fled to Arcadia. Corinth was utterly destroyed by the victorious Roman army and all of her treasures and art plundered.
The stage is set. The battle lines are drawn and you are in command. Can you change history? 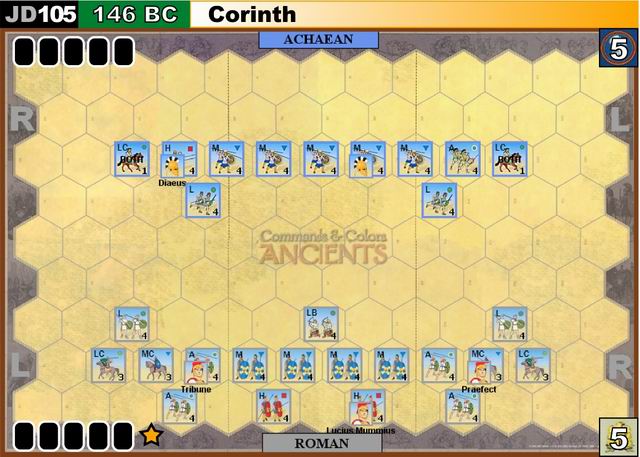 Special Rules
The Achaean light cavalry units have only one block each.
They may not rally above this, but both must be eliminated for the Roman player to claim a victory banner.

CORINTH
There is a good record of the numbers involved here, but that leaves the poor Achaeans heavily outnumbered. This will therefore probably be the one sided affair it historically was, but those heavy and medium troops with leaders could do it for the Greeks. The Greeks have a standard hoplite army and the Romans a standard consular army with some Cretan archers and a bigger than usual cavalry contingent. The special rule is my attempt to show the massive disparity in cavalry numbers (600 to 3,500) without swamping the board with Roman cavalry, but still giving the Greeks something to play with. If the Greeks have one unit of cavalry on each flank it means the Romans should get 12!, clearly too many. Even giving the Greeks one full unit would give the Romans six units.Still too many in my opinion. Having 2 blocks, each therefore worth 300 men, means I can give both Greek flanks a cavalry guard which is both visually pleasing and fairly historically accurate. If a block is worth 300 cavalry, it means the Romans come out with four units of cavalry which feels right to me for this size of battle