Written by Joe Bisio. Posted in Battles of the Achaean League (256-146 BC)

The Achaean League vs Sparta

Historical Background
Machanidas, Tyrant of Sparta, was blocked in his invasion of Achaea by Philopoemen’s army just outside the city of Mantinea. The League’s army took station behind a ditch located per Polybius about 2,000 paces from the city. Machanidas deployed his war machines (these were probably bolt throwers) in front of his army and began to peck away at the opposing phalanx on the other side of the ditch. In response the Achaean left flank cavalry and light troops moved forward to attack the Spartan right flank. According to Polybius, the League forces on this side of the field were quickly repulsed and Machanidas led his troops in pursuit towards the nearby city. Philopoemen managed to wheel his phalanx leftwards along the ditch catching the pursuing Spartans in the flank. After a hard hand to hand fight the Spartan Army gave way, and Machanidas was killed in the debacle. 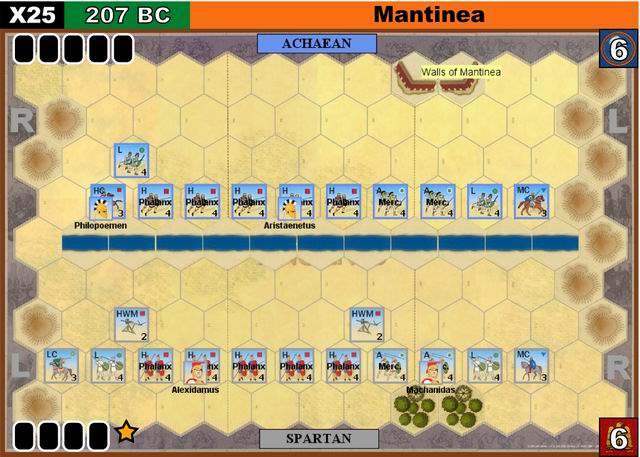 Victory:
Both sides: 6 Banners (however see “Walls of Mantinea” rule below). The Achaean Player scores only a ½ Banner each when he eliminates a Spartan War Machine unit.

Scenario Special Rules:
Special units Both Sides—Phalanx and Mercenaries
Phalanx Infantry: All Medium and Heavy Infantry units in the game are assumed to be Phalanx Infantry—even the Spartans seem to have been drawn up in somewhat similar style to the Macedonian phalanxes.
Phalanx Infantry may not engage in Close Combat if they have just moved before combat their maximum of one hex, (or two hexes if doing double time), unless the move was into the two hexes toward their “front” (i.e.: “front” as in towards the initial setup position of the opposing army) the moving Phalanx Infantry unit, and that moving Phalanx unit than proceeds to engage in close combat with an enemy unit in one of its “front” two hexes in the new hex it moved to. Exception: A Phalanx unit may always conduct combat into a ditch hex after moving—regardless of direction moved or “front”.
Phalanx Infantry may engage in normal Momentum Movement and Momentum Combat regardless of the direction of the combat. Note: Non-moving Ordered Phalanx units may always engage in Close Combat in any direction.
Example of Front: A Spartan Phalanx unit in hex D9 has “front’ hexes in E9 and E10.
An Achaean Phalanx unit in E9 has ‘front’ hexes in D8 and D9.

Mercenary Peltasts: Both sides had large numbers of mercenary Peltasts representing the ancient Greek version of the “Dogs of War”, and who occupied a class of troop unit somewhat between the between the light javelin men and the phalanx. Therefore add the following rule detailed below for all Auxillia in the scenario:
All Auxillia on both sides in the battle may evade enemy phalanx infantry (see above) if attacked by them in close combat. Follow the normal rules for evasion found in the rulebook. Auxillia units located in ditch hexes when attacked in close combat may never evade.

Terrain Considerations:
Walls of Mantinea: Cavalry units may not enter these hexes or close combat into them. Achaean Infantry units defending in these hexes add one to their normal dice when battling back from these hexes. If Spartan infantry units enter these hexes the tiles are removed upon entry and one Banner is scored for the Spartans for each such tile removed. The normal Rampart and Rampart facing rules are ignored for all purposes.
The Ditch: Units in ditch hexes when engaged in close combat attack and battle-back at one dice less than normal unless the unit they are engaged with is also in a ditch hex. The Ditch also impacts the mercenary and phalanx troop types as noted above. The Ditch has no other combat or movement effects.

Spartan War Machines
Spartan War Machines have the following special characteristics:
a) They have no movement capability and if forced to retreat from the hex they start the game in they are eliminated.
b) Another Spartan unit (and potentially a Spartan Leader)may stack with a Spartan War
Machine in the same hex.
c) War Machines may not battle back or engage in close combat, but a Spartan unit
stacked with them certainly can. War Machines stacked with a unit and attacked in close combat are not affected by combat results while that unit is in the hex with them. Only the unit itself (and any stacked with leader) is potentially affected.
d) An order given to a unit stacked with a War Machine also orders the War Machine for
“free”.
War Machines, when ordered, may engage in missile combat only, at a range from one to three hexes—they are the only missile unit type that may fire when adjacent to an enemy unit. At one hex range to target one dice is rolled for the missile fire, which is conducted normally—at two to three hex range the War Machine rolls two dice.
Command Rules:
A Leader attached (stacked with) a friendly unit may cancel one sword hit on the unit in lieu of canceling a retreat hit.
Philopoemen may cancel both a sword and a retreat hit if stacked with a friendly unit.
A unit involved in close combat with the support of a Leader may only count one helmet hit amongst those rolled to inflict a hit on an opposing unit, exception, if the leader is
Philopoemen up to two helmets may be counted as hits.