Historical Background
Having failed to remove the Lacedaemonian threat during an exhaustive seven year conflict with Cleomenes III of Sparta, the Achaean League (still under the leadership of the strategos Aratus of Sicyon) turned to Macedonia and their king, Antigonus III Doson, for assistance. The shrewd Macedonian king offered alliance in return for possession of the Acrocorinth citadel and control over other certain Peloponnese poleis, which was quickly granted by the League. After some preliminary maneuvering the previous year, in the early summer of 222 BCE a large Macedonian army joined other allied forces, eventually totalling over 28,000 in number and drawn from the Peloponnese as well as from northern Macedonian allies. Antigonus marched toward Laconia, seeking to end the war of maneuver and force a climactic battle with Cleomenes.
Cleomenes III had fought masterfully throughout this extended conflict, and prepared to receive his numerically superior army on advantageous ground along the most direct route to Sparta, which he correctly assumed was the target of his Macedonian adversary.
Cleomenes marshalled a Spartan army of over 20,000 and stationed them at the northern approach to Sparta near the village of Selassia. He divided his infantry and prepared fortifications atop the hills of Euas and Olympus, with his cavalry posted along the Oenoes River between them. Commanding the infantry atop Olympus, he and his brother Eucleidas (who commanded the force atop Euas), both erected basic fortifications and awaited the Macedonians. Antigonus accepted the Spartan challenge, and moved his army in position to assault the Spartan force before him. Using a similar formation, the Macedonians probed the Spartan defenses for several days before forming up to attack both hills simultaneously, with their cavalry also astride the river between the two hills to support either infantry division if needed.
The battle was a hard fought struggle with several key turning points, as the Macedonian infantry advanced on both positions. Eucleidas made the mistake of allowing the Macedonian right to gain the hill, choosing to remain behind his fortifications, which allowed the weight of numbers to turn the battle in favor of the attackers. A timely Macedonian cavalry charge narrowly dispersed a Spartan counterattack near the river which could have reversed the momentum at a key moment, and Eucleidas fell in the ensuing struggle on Euas. The inexorable Macedonian assault on Olympias featured the finest heavy infantry of both armies, as well as both kings, and was a tightly contested struggle in its own right; however, once Macedonian and allied troops swept over from their victory on Euas to flank Cleomenes’ formation on Olympias, the Spartans there were also overwhelmed by numbers. In this, the desperate final moments of the Cleomenean War, the Spartan army “now fled in rout, followed and cut down by the enemy; but Cleomenes with a few horsemen reached Sparta in safety.” (Polybius) The Spartan army was shattered, and Macedonia once again reigned supreme on the Peloponnese.
The stage is set. The battle lines are drawn and you are in command. Can you change history? 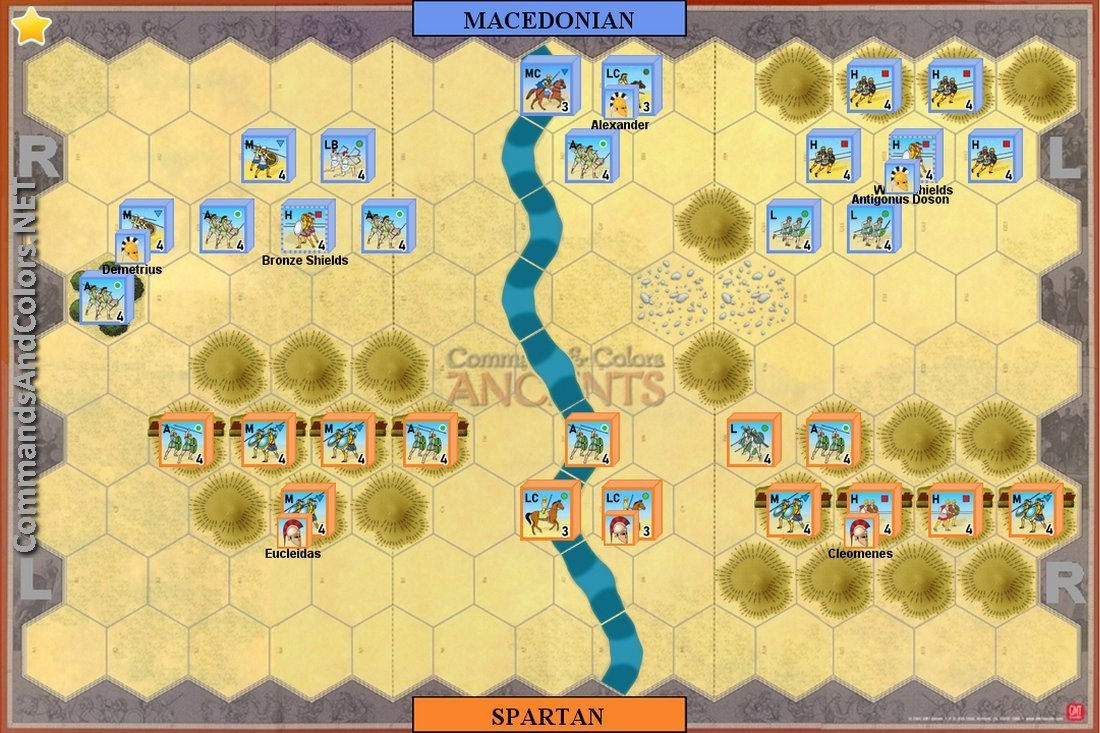 Special Rules
Special Units: The White Shields and Bronze Shields are elite Macedonian units, and may ignore one banner.

The Oenus River is fordable along its entire length.

GF1954 replied the topic: #4253 2 months 2 weeks ago
2 solitaire battles with the Spartans winning both, 6 - 4, and 6 - 0. The first contest was closer because the Spartans came down from the ramparts on the left flank. That is where the majority of fighting took place. In the second contest, I let the Spartans hold, and let the Macedonians attempt to take the ramparts. They failed.

taliapharaoh replied the topic: #3697 1 year 6 months ago
It also appears there is a small error in the description of the special rules:

"...or a Macedonian unit successfully occupies any entrenchment hex at the remainder of the Macedonian turn, remove the entrenchments for the rest of the game."

"...or a Macedonian unit successfully occupies any entrenchment hex at the END of the Macedonian turn, remove the entrenchments for the rest of the game.

taliapharaoh replied the topic: #3696 1 year 6 months ago
Sorry, yes, the intention was to have the ramparts and hill hexes function normally, I should have clarified. ~Travis

Mark-McG replied the topic: #3692 1 year 6 months ago
So my view on how this works is that the number of dice is determined by the hill terrain. Maximum 2 dice uphill and 3 dice from hill to hill (except cavalry).
The ramparts allow the occupant to ignore 1 flag and 1 Sword if across a rampart hexside, be it uphill or hill to hill.

This would be those two normal terrain rules working together.

Andygor replied the topic: #3688 1 year 6 months ago
Fortifications on the hill get a bonus in the battle for the hill? I mean, restrictions on the number of battle dices...
Read More...