Historical Background
Spartan expansion under King Cleomenes III began In 229 BCE, primarily at the expense of the Achaean league, who possessed impressive numbers due to their coalition of city-states and regions under the leadership of their strategos Aratus.
The early stages of this conflict were marked by Achaean setbacks, including unsuccessful assaults on Tegea and Orchomenos, as well as retreat of an Achaean army that declined to oppose Cleomenes at Pallantium despite possessing greater numbers. The shifting tides on the Peloponnese were also gaining the attention of regional powers such as Ptolemy III of Egypt and Macedonia.
In 227 BC Aratus undertook an invasion of Elis, a Spartan ally, which predictably led to a Spartan army marching to the relief of the Elians under the personal command of Cleomenes. In the first battle of a conflict later named the Cleomenean War, Cleomenes caught the Achaeans by surprise near Mount Lycaeum while they were returning from Elis. The surprise was complete, as the Achaean army dissolved under the Spartan onslaught, suffering large numbers of captured and casualties in the debacle.
Amazingly, Aratus (who was believed to have fallen in the battle) showed his resilience by regrouping and leading the remnants of his scattered army in a successful capture of Mantinea. However, Spartan victories at Ladoceia and Dyme over the course of the next year would soon prove decisive in establishing Spartan control over the majority of the Peloponnese.
The stage is set. The battle lines are drawn and you are in command. Can you change history? 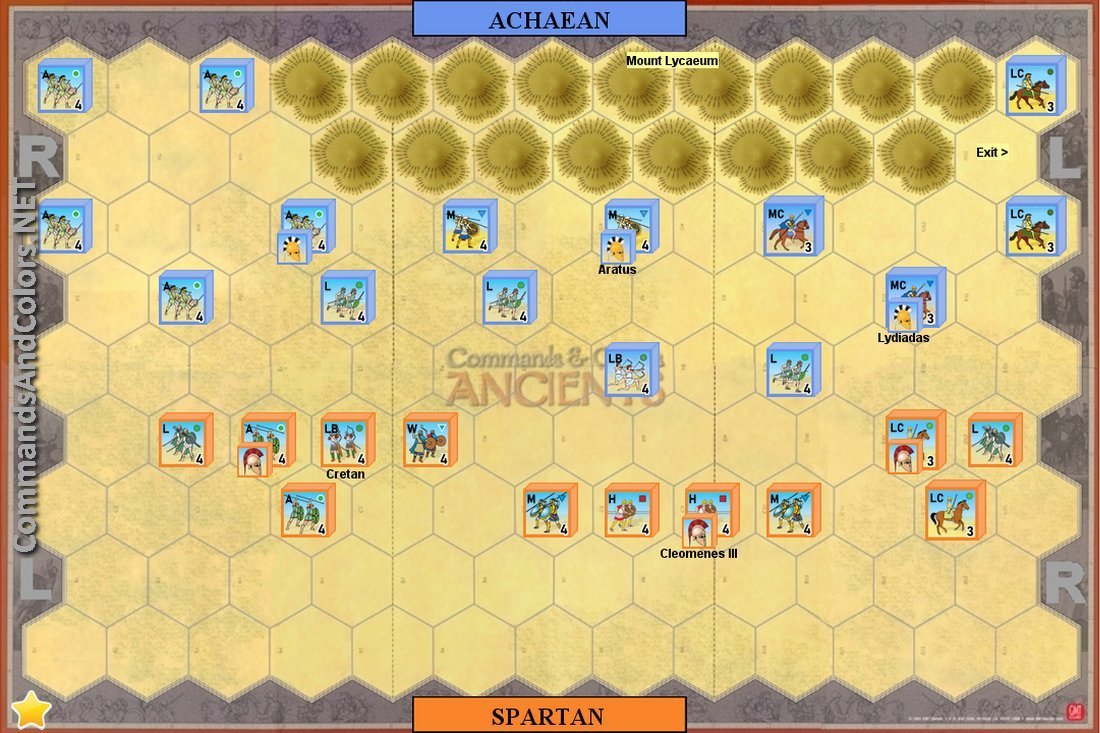 Special Rules
> The Achean army was caught by surprise; to reflect this, the Achaean army begins with 3 cards, and draws two cards after each of its first two turns until they have five.

> If Cleomenes is killed or retreats off the board, immediately remove one card from the Spartan hand.

> Any Achaean infantry unit that escapes the map on any of the THREE exit hexes gains a victory banner for the Achaean player. Leaders and cavalry may exit, but no banners are gained or lost for leader/cavalry escape. Orders may be used for cavalry and leader exits to avoid being destroyed.