Historical Background
Cleomenes III once again marched to counter Achaean moves in the region surrounding Megalopolis, in the hopes of bringing Aratus to a decisive engagement. The Achaean forces gained the early initiative by driving Spartan light forces from the field in a minor skirmish near the city walls, and looting a Spartan camp. This in turn emboldened Lydiadus of Megalopolis to pursue the retreating Spartans with his cavalry force across a defile against the orders of Aratus.
Aratus’s concerns were well-founded, as the wily Spartan commander soon turned the tables on the Achaeans, sending his Tarantine and Cretan mercenaries into the broken, marshy ground that was “obstructed with trees, and intersected with large ditches.” These auxiliaries first disrupted the cavalry advance, then with the support of the full weight of the Spartan infantry surrounded and annihilated Lydiadus’s force before attacking the main Achaean army, which was soon also overwhelmed and put to flight ignominiously in full view of the walls of Megalopolis.
The brave Lydiades, who had accused Aratus of cowardice before conducting his ill-fated pursuit, fell on the battlefield. Adding disgrace to the defeat of the Achaean army, Cleomenes returned the body of the fallen Lydiadus dressed in a purple robe and with a crown on his head, in mockery of Lydiadus’s vocal opposition to Spartan hegemony. As a result, the reputation of Aratus suffered as his indecision, rather than Lydiadus’s impetuosity, was blamed for the fiasco. Though official support of Aratus as strategos was soon withdrawn by the Achaean League leadership, the ever-resourceful Aratus soon regained the confidence of the League by outmaneuvering Spartan forces at Orchomenus, capturing the city along with the father-in-law of Cleomenes.
The stage is set. The battle lines are drawn and you are in command. Can you change history? 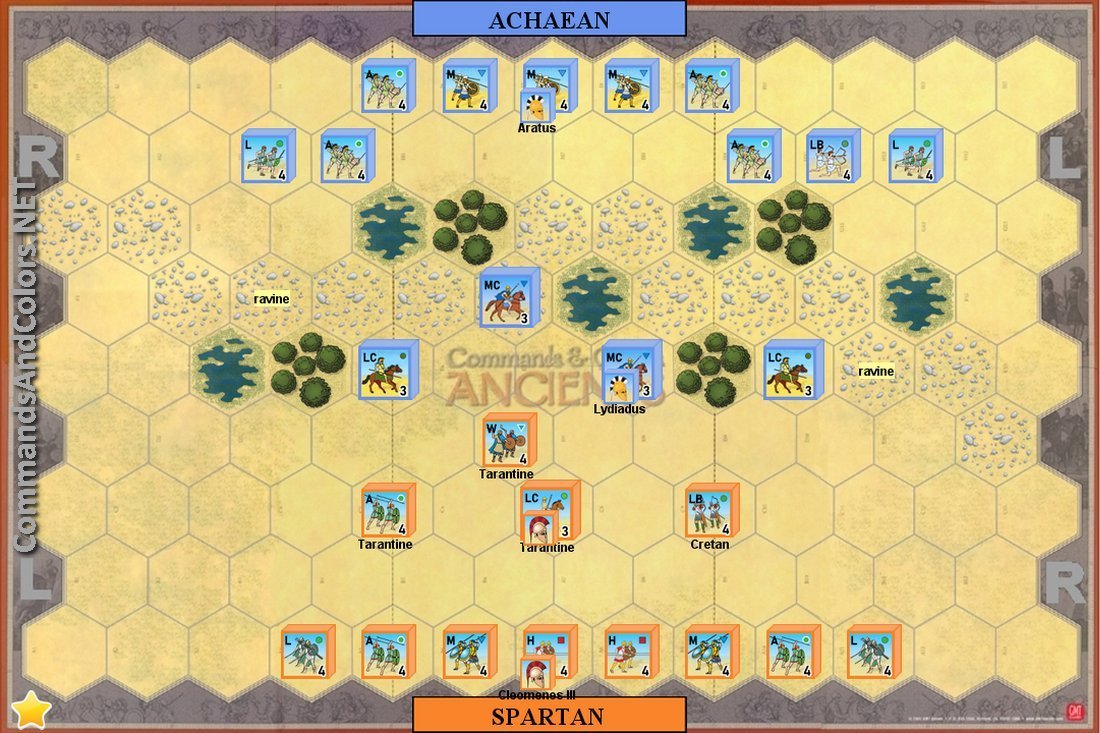 taliapharaoh replied the topic: #3695 1 year 11 months ago
Yes, the intent was to treat the ravine simply as "broken ground" hexes.

Mark-McG replied the topic: #3691 1 year 11 months ago
my guess is the ravine is treated as Broken Ground
www.commandsandcolors.net/ancients/the-g...6-broken-ground.html

Andygor replied the topic: #3690 1 year 11 months ago
Hello there! In the special rules, you must specify the features of the area "ravine".
Read More...