Written by Benedetto Giovanni Roselli. Posted in Battles of the Achaean League (256-146 BC)

Historical Background
Antigonus decided that the time had finally come to launch his assault. Unbeknownst to either Kleomenes or his brother Eukleidas, during the night a large force of Illyrian and Akarnanian infantry had crept around the foot of Euas and occupied a portion of the dry Gorgylos streambed. Having lain concealed throughout the night, these troops now sprung up from their hidden positions and began to dash boldly up the hillside. Though Kleomenes had ordered that the hills should be fortified with ditches and palisades, Eukleidas had not extended his defences for any appreciable distance along this flank. The dumbfounded Spartan simply had not considered that the enemy might move into position to assail this unfortified flank without being noticed. But Eukleidas was an astute enough commander to recognize another opportunity to damage his opponents. When Antigonos’ centre halted to await the king’s signal to attack and his left continued on, a gap opened between the Illyrian unit on the left flank of the phalanx and the mixed cavalry making up the centre’s right flank. Undaunted by their lack of protection, the men of the phalanx pressed on, but as they drew near to the enemy fortifications, a large force of light infantry suddenly appeared off their left flank. These troops, drawn from the Spartan centre and left, had been ordered by Eukleidas to attack the exposed phalanx. This surprise attack placed in jeopardy the phalanx, which had become precariously disordered as units on the far right continued their advance and others nearer the actions slowed and sought to help their comrades.
Barrelling toward them was a portion of Antigonos’ cavalry from his centre, led by the impetuously brave Philopoimen. Philopoimen watched as the enemy light infantry ploughed into the struggling phalanx and began to roll up the Antigonid force. Without expecting Antigonus's signal, unable to control himself any longer, the headstrong leader called upon the men of his city to follow him as he set spurs to his mount and careened forward. Slamming into the backs of the preoccupied Spartan light troops, Philopoimen’s cavalry instantly broke the enemy’s heretofore victorious ranks and sent them running for their lives.
Eucleidas on the western side of the valley, committed a cardinal error and held his troops stead fast to the heights. This, as Polybius remarks (2.68.3−4), threw away the advantage of the ground. It should be remembered that Eukleidas had been ordered by Kleomenes to entrench and fortify Euas, with the obvious intention of holding the palisade at the hill’s summit. At this point the rest of Antigonos’ centre pressed ahead in a full out attack on Kleomenes’ centre while the Macedonian and Illyrian phalanx resumed its assault on the heights of Euas. Screened by a force of light infantry, who flung missiles at the defenders and sought to tear down their palisades, the articulated phalanx of Antigonos’ right wing reached the summit and began the bloody work of storming through the defensive ditch and over the makeshift wall Eukleidas’ men had erected. By the time the full weight of the Bronze Shields was brought to bear against Eukleidas’ men on Euas, the battle was virtually over.
At the foot of Olympos, meanwhile, Antigonos easily steered his great double-depth phalanx up the gentle slope toward Kleomenes’ position at the fortified summit. With much less vegetation and far smoother terrain, Olympos offered the king a far easier ascent than that which Euas provided.
Already Antigonos’ right-wing units were advancing toward the foot of Olympos to take his phalanx in flank just as had been done to his brother. In his desperation to avert a complete defeat, the king ordered a bold, some say foolhardy, manoeuvre. Directing his light infantry and mercenaries to redouble their efforts and drive off Antigonos’ screening force, Kleomenes instructed his phalangites to tear down their fortifications in preparation for an advance. The Spartans demolished their palisades and made ready to charge into the melee below. With Antigonos’ troops moving up the flank of Olympos, intent on surrounding the Spartan phalanx, Kleomenes saw no other option but to charge. With his left routed and his centre now ﬂanked, Cleomenes’ own left ﬂank would soon be open to attack from the valley ﬂoor. Cleomenes recalled his light−armed and posted them on the wings of his phalanx, as did Doson. Victory would be gained or lost hereon Olympus. The phalanxes lowered sarisae and crashed together with the Spartans, initially, driving the Macedonians back down the slope. After furious give and take, Doson’s Macedonians closing up the ranks of their pikes, and taking advantage of the peculiar formation of the 'double phalanx' closed up their ranks from the rear. Their drive proved far too strong for the Spartans who, spitted by sarisae, were driven back up onto their ﬁeld works in confusion where they broke and ﬂed.
Antigonus, victorious on the battleﬁeld, marched on Sparta and took it.
The stage is set. The battle lines are drawn and you are in command. Can you change history?

Antigonus Doson, king of Macedonia, moved his army, along with his allies, into Laconia. The main force consisted of ten thousand Macedonians for the phalanx, three thousand light armed, and three hundred cavalry. With these were a thousand Agraei; the same number of Gauls; three thousand mercenary infantry ... The whole amounted to twenty-eight thousand infantry and twelve hundred cavalry. Cleomenes had expected the attack, and had secured the passes into the country by posting garrisons, digging trenches, and felling trees; while he took up position at a place called Sellasia, with an army amounting to twenty thousand, having calculated that the invading forces would take that direction: which turned out to be the case. This pass lies between two hills, called respectively Evas and Olympus, and the road to Sparta follows the course of the river Oenus. Cleomenes strengthened both these hills by lines of fortification, consisting of trench and palisade. On Evas he posted the perioeci and allies, under the command of his brother Eucleides; while he himself held Olympus with the Lacedaemonians and mercenaries. On the level ground along the river he stationed his cavalry, with a division of his mercenaries, on both sides of the road. When Antigonus arrived, he saw at once the strength of the position, and the skill with which Cleomenes had selected the different branches of his army to occupy the points of vantage, so that the whole aspect of the position was like that of skilled soldiers drawn up ready for a charge. For no preparation for attack or defence had been omitted; but everything was in order, either for offering battle with effect, or for holding an almost unassailable position.
Polýbios 2.65 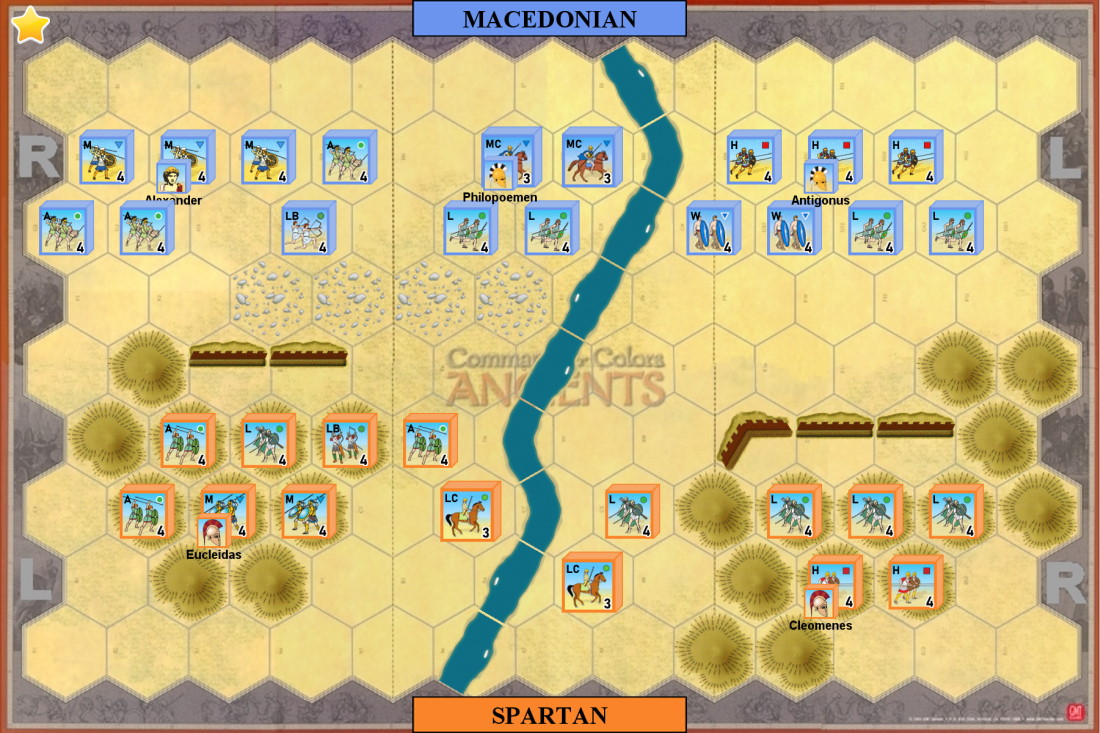 Heavy troops of Macedonian Army are 'Silver Shields'. These 3 units fight (phalanx) as Sacred Band:
• These phalanx units will score one hit for each leader symbol rolled in close combat. A leader does not have to be attached or in an adjacent hex to confer this benefit.
• The 'Silver Shields' may ignore one flag.
• The units retains these special abilities until the last block of the unit has been removed from the battlefield.