Written by Miguel Marques. Posted in Battles of the Achaean League (256-146 BC)

Historical Background
The First Macedonian War broke out after Philip V of Macedon allied with the victorious Hannibal. Some battles took place between Philip’s ally the Achaean League and Rome’s llies in Sparta. Philip was forced to help the Achaean army in the early years, but things changed when Philopoemen was appointed strategos of the Achaean League in 209 BC. He reformed cavalry and infantry, and introduced the Macedonian tactis and equipment. His army was soon put to the test, when the Tyrant of Sparta Machanidas captured Tegea and advanced toward Mantinea. The Achaeans took up a position on the narrow plain outside the city, north of the 1st and 2nd Mantinea battle sites, behind a wide ditch.
Machanidas deployed bolt throwers on their side of the ditch with the intent of shooting up the Achaean phalanx, one of the first attempts to soften up the enemy infantry before an assault. In response the Achaean left flank cavalry and light troops moved forward to attack the Spartan right flank. The League forces on this side of the field were quickly repulsed and Machanidas led his troops in pursuit toward Mantinea. Philopoemen managed to wheel his phalanx leftwards along the ditch catching the pursuing Spartans in the flank. After a hard hand to hand fight the Spartan army gave way, and Machanidas, that
had returned to the battlefield with his mercenary troops, was killed by Philipoemen himself.
With no allies in Greece and their main war aim achieved, preventing the Macedonians from joining Hannibal in Italy, the Romans made peace with Philip in 205 BC. But they never forgave the Macedonians for allying with their enemy when they were most vulnerable, and would defeat them a few years later at Cynosphelae and Pydna. Sparta, that during the 3rd century BC had built a wall and issued their first coins, dissapeared as a military power after their defeats against Philopoemen. The Achaean leader entered Laconia in 188 BC, demolished the wall around Sparta, abolished Spartan law and education system, and forced Sparta to become a member state of the Achaean League. Philopoemen died after a battle in Messenia in 183 BC, and was considered “the last of the Greeks”.
The stage is set. The battle lines are drawn and you are in command. Can you change history? 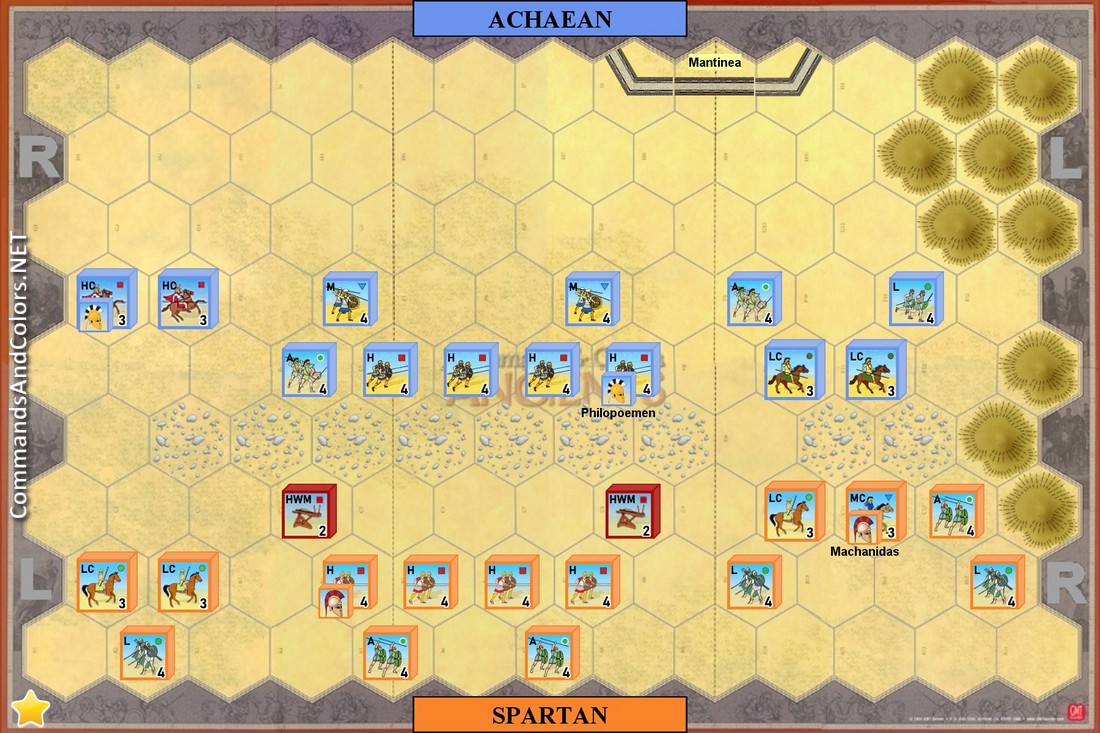 Special Rules
War machines: they have a range of 3 hexes. During his first turn, the Spartan player can order them normally in addition to the units ordered by his command card.

Pursuit: each Mantinea hex occupied by a unit, whatever the army, scores 1 Banner for the Spartan player. The walls of Mantinea are Scalable City Walls.

taliapharaoh replied the topic: #3728 1 year 6 months ago
We really enjoyed this one, seems like there could be multiple options for both players based on the setup.
Read More...