Historical Background
The Carthaginians were once again at war with Syracuse and had placed the city under siege. Observing his success in Italy, the Syracusans asked for help from Pyrrhus, offering him command of their armies. Pyrrhus decided that Sicily offered him a great opportunity and accepting their offer he transferred his army there by sea. The combined Epirote/Syracusan army, with an ever growing following of Sicilian Greek allies, swept the Carthaginians from almost the entire island except for a toehold in the western port city of Lilybaeum, which was placed under siege. The Carthaginians attempted to break the siege by open battle, in which they were defeated, but they still retained the city. Pyrrhus, denied total victory, tried to railroad the Sicilians into an invasion of North Africa and he subsequently fell out with his allies and returned to Italy in 275 BC.
The stage is set. The battle lines are drawn and you are in command. Can you change history? 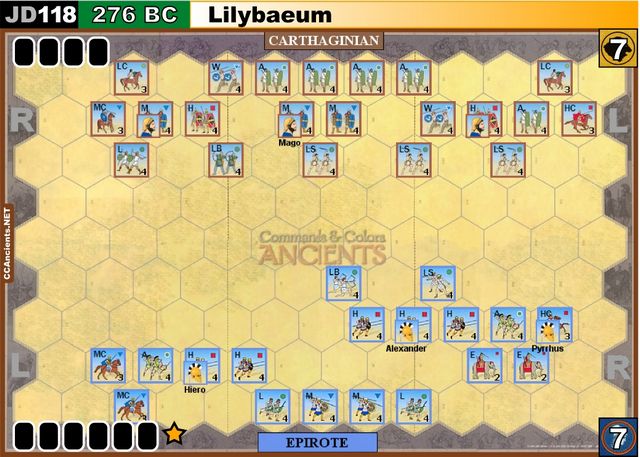 LeonardoAngelo replied the topic: #2195 3 years 11 months ago
Ok, Admiral is probably right. Then just in the description of the battle scenario, you must change Carthaginian vs Macedonian to Carthaginian vs Epirotes

The-Admiral replied the topic: #2152 4 years 1 month ago
Armies are correct. The Greeks were half sicilian and half from Epirus. As the army was led by Pyrrhus of Epirus, I called it Epirote. This is similar to Pyrhus' battles against the Romans where his Epirote army was half Italiote Greeks.