Historical Background
After his defeat at the Battle of Beneventum in 275 BC, Pyrrhus returned to Epirus with only 8,500 troops and little money. In order to gain finance he augmented his army with Gallic mercenaries and set off to plunder Macedonia, which was currently ruled by Antigonus Gonatus (see battle of Lysimachiea). Pyrrhus was initially successfull and 2,000 Macedonian troops joined him.. Pyrrhus now conquered most of Macedonia and forced Antigonus into a few coastal enclaves.
Cleonymus, a Spartan king who had lost his throne and was determined to win it back, persuaded Pyrrhus to attack Sparta and place him on the throne. Pyrrhus, ever the adventurer, lept at the idea, especially as the Spartan King Areus was away fighting in Crete, and marched on Sparta with an army of 25,000 foot , 2,000 horse and 24 elephants. Accounts differ as to what actually happened. Pausanius has Pyrrhus defeating an alliance of Sparta, Argos and Messenia but then he delays the capture of Sparta whiles he regroups and plunders the surrouning countryside. The Spartans revamp their fortifications they had built to fend off an earlier attack by Demetrius and before Pyrrhus can capture Sparta he is drawn off to fight the approaching Antigonus. Plutarch has Pyrrhus arriving before a lightly defended Sparta in the evening and resting for the night before attacking. The Spartan citizens come out at night and dig a trench opposite the camp of Pyrrhus so that Pyrrhus is beaten off the following day by the Spartan militia ably led by Acrotatus, the son of Areus. On the next day Pyrrhus attacks again and is succeeding until reinforcements arrive in the shape of the Spartan toops from Crete under King Areus and a force of mercenaries led by Ameinias sent by Antigonus, that turn the tide. The Advance of Antigonus on Argos draws Pyrrhus away to his death in Argos.
Elements of both stories may be true, but this battle is based on Plutarch's second day of fighting. The terrain is based on a map I found of Ancient Sparta. It shows the valley of the Eurotas river north of Sparta which is where I believe Pyrrhus would have approached from..
The stage is set. The battle lines are drawn and you are in command. Can you change history? 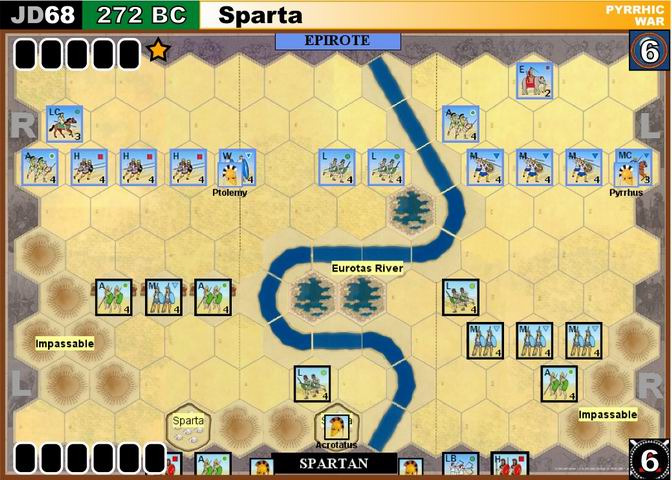 Victory
6 Banners.
The game ends in a Spartan victory if the Epirotes have not won before the last card is drawn.
Do not re-shuffle the pack when "I am Spartacus" is played.

Special Rules
All hills except hexes A6 and A7 are impassable.

The river (Eurotas) is fordable.

The Spartan player, after he/she has inspected their initial command cards, but before play begins, may place
Acrotatus with any Spartan unit.

The Epirote player gains 1 victory banner for each camp hex (part of the city of Sparta) that one of his/her units currently occupies.

At the very start of the 1st Spartan turn, that player should roll 1 dice.If a helmet is rolled that player must place the units of one of the below reinforcement groups in any vacant A row hexes. If a helmet isn't rolled continue rolling at the start of each subsequent Spartan turn, adding a dice each turn, until the 1st group is received. Once the 1st group has been received start the process again for the 2nd group.