Beneventum: 275BC (The Main Battle)

Historical Background:
“Pyrrhus endeavored by a circuit to make a night attack on his opponent…but during the march he was obliged to make through thickly wooded country, the torches of his guides gave out, and the column lost its way. In consequence …it was broad day when he reached the vicinity of the Roman camp. The consul Manius came out to meet him, and, attacking the van as it debouched from the hills, threw it into confusion and cut out a number of prisoners and elephants. But Pyrrhus withdrew, made his way into the plain, deployed into line and confronted Manius. The contest was obstinate. Manius appears to have had the better of the phalanx; but the elephants again came into play and by a well-timed advance forced the legion back to the trenches of the camp. Here, however, Manius ordered out the entire reserve left within the walls, which charging unexpectedly upon the elephants drove them back. These, as so often happened in olden warfare, turned from their foes upon their friends, completing a destruction already begun. Pyrrhus was defeated with an enormous loss in killed, thirteen hundred prisoners and eight elephants captured. He fled to Tarentum, whence soon he sailed for Epirus, leaving Milon in command. This lieutenant managed to hold on till Pyrrhus died in 272 BC when he surrendered with the promise of free exit.”
(The above was from T.A. Dodge’s 1891 masterwork Hannibal p.118-119) 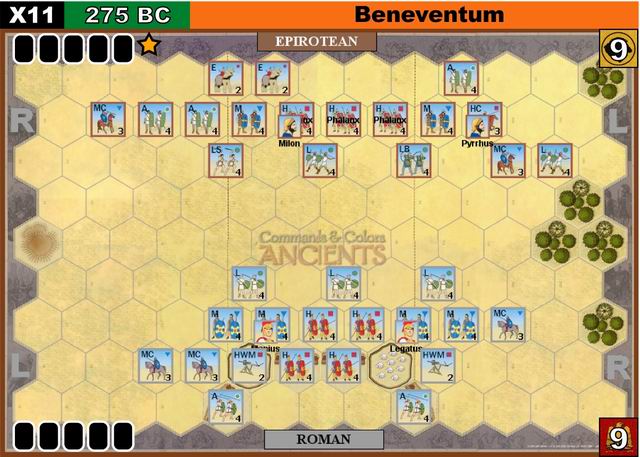 Victory:
Victory goes to the first side to reach 9 Banners—Romans get two banners for eliminating Pyrrhus—The Epirotean/Allied Player gets one banner each time one of his units enters a rampart or Roman camp terrain tile—upon the Epirots entering a hex with such a tile remove that terrain tile and score the banner.

2) Leader Special Rules:
A Leader attached (stacked with) a friendly unit may cancel one sword hit on the unit in lieu of canceling a retreat hit. Pyrrhus can cancel both a retreat and a sword hit if present
A unit involved in close combat with the support of a Leader may only count one helmet hit amongst those rolled to inflict a hit on an opposing unit.
An Epirot unit in the same hex with Pyrrhus can count up to two helmets when inflicting hits rather than just one.