Historical Background:
“The first day’s battle ended only by night. Pyrrhus’ forces slept on their arms; the Roman army, better provided crossed to its camp. It had not been victorious.”
“Next day Pyrrhus.., managed to take possession of advanced ground where he could put his elephants into line, as well as confine the legion to a surface on which it could not so readily advance or retreat, in the swaying to and fro of the lines closing in battle. The Romans had prepared some chariots with long projecting poles, to meet the onset of the elephants; but they proved unavailing on the rough ground.”
“The conflict of the second day was long and bitter. The legionaries fought among the spears of the phalanx, reckless of their own persons, determined to break through the bristling array; but time and time again they were thrown back by the heroic personal efforts of Pyrrhus. Finally Roman pertinacity carried the day; the king’s allies could no longer resist the better discipline of the Roman cohorts, and the wings weakened, the legionaries began slowly to force the wavering phalanx back. Pyrrhus, foreseeing the gravity of his situation, sent his elephants on a circuit to attack the Roman horse….The mighty creatures charged down in line with a thundering tread upon the knights, and as at Heraclea, the frightened horse gave way….Aided by this diversion, Pyrrhus rallied the phalanx and the allies, and with one advance all along the line forced back the startled legionaries. The Romans were driven beyond the river. Pyrrhus held the field.
“….The losses were enormous; fifteen thousand fell on both side says Dionysius; but Hieronymus gives the Roman loss at six thousand killed, while Pyrrhus’ own accounts state his losses at three thousand five hundred and fifty killed…”
(The above was from T.A. Dodge’s 1891 masterwork Hannibal p.115-116) 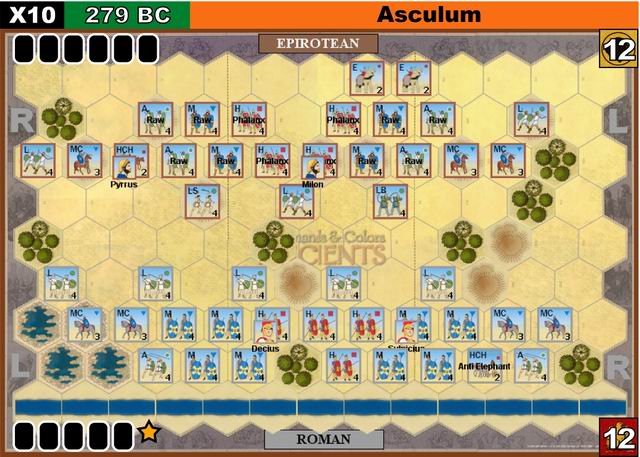 Victory:
Both sides need 12 Banners to win: If the Epirots reach 12 Banners at any time play through the next complete Roman Player-turn—if the Romans reach 12 Banners during their next Player-turn the result is an historical “Pyrrhric Victory” otherwise the game ends in a Epirot Victory. The Romans get 2 Banners (instead of 1) if Pyrrhus is eliminated.

2) Leader Special Rules:
A Leader attached (stacked with) a friendly unit may cancel one sword hit on the unit in lieu of canceling a retreat hit. Pyrrhus can cancel both a retreat and a sword hit if present
A unit involved in close combat with the support of a Leader may only count one helmet hit amongst those rolled to inflict a hit on an opposing unit.
An Epirot unit in the same hex with Pyrrhus can count up to two helmets when inflicting hits in close combat or battle back rather than just one.

5) Marsh Hex Tiles:
Hexes C1, C2, B1, & B2 are considered to be marsh or “wetlands” hexes. A unit that retreats or evades into a wetland hex stops at the first hex entered—this satisfies the rest of the any retreat hits or evasion result, however one block is removed from the retreating or evading unit (Leaders are OK if Retreating or evading—no loss). Attacks in or out of Marshes are the same dice as if the area was “broken ground”. Units entering a marsh hex via normal movement must halt move and may not engage in close combat if the enemy is adjacent. Chariots & Phalanx units may never enter or close combat into a marsh hex. Archers in a marsh hex may not fire if they have just moved and fire with only one dice if they started their move in a marsh hex. Units that make a Momentum advance into a marsh hex may not move further and may not engage in Momentum Combat. Marshes do not block line of sight for fire combat.

6) The Roman Anti-Elephant Chariot (AEC) unit
The Romans, at game start, have a special anti-elephant chariot (or AEC) unit that sets-up in hex B10. Its normal move for the scenario is one hex (as opposed to the normal two hexes for heavy chariots)—The unit may not Close Combat attack or Battle Back against enemy units other than elephants, but is totally immune to any retreat or sword
Hits inflicted on it, and indeed is immune to any missile fire directed at it, in fact it can never suffer and may never suffer a retreat result. Against Elephants it rolls 3 dice normally when attacking or battling back—elephant units roll only two dice when attacking or battling back against the AEC—and sword results from the Elephant on the AEC never inflict a hit. The AEC receives no additional advantage in combat if a Leader supports it.