Historical Background
King Pyrrhus of Epirus went to Italy in 280 BC to help the Greeks of Italy fight the Romans. Despite two costly victories the Romans were still undefeated, so Pyrrhus, starting to lose friends in southern Italy, accepted an offer from Syracuse to take charge of their armies and lift the siege of their city from the Carthaginians. Pyrrhus saw a new opportunity for conquest in Sicily and took the offer. On his arrival in 278 BC, many Greek Sicilian cities rallied to his cause. The Carthaginians, maybe wary of his military prowess, neither challenged his sea crossing from Italy or stood for a land battle at Syracuse, but scuttled back west into their fortified ports.
In the Spring of 277 BC Pyrrhus set out west to conquer Carthaginian controlled Sicily. The Carthaginians, who had been massing an army of African levies and european mercenaries, finally made a stand at Mount Eryx where they hoped the hilly terrain would offset the power of the Epirote phalanx and elephants. The Epirote/Greek Sicilian army numbered 30,000 foot, 2,500 horse and 19 elephants. The Carthaginians are estimated to have had 35,000 foot and 3,000 horse. The Carthaginians were smashed by the Greek attack and fled to their Mount Eryx fortress where they were soon assaulted and defeated. Unable to take the final Carthaginian stronghold of Lilybaeum, Pyrrus would fall out with his Sicilian host and go back to Italy in 275 BC never to return.
The stage is set. The battle lines are drawn and you are in command. The rest is history. 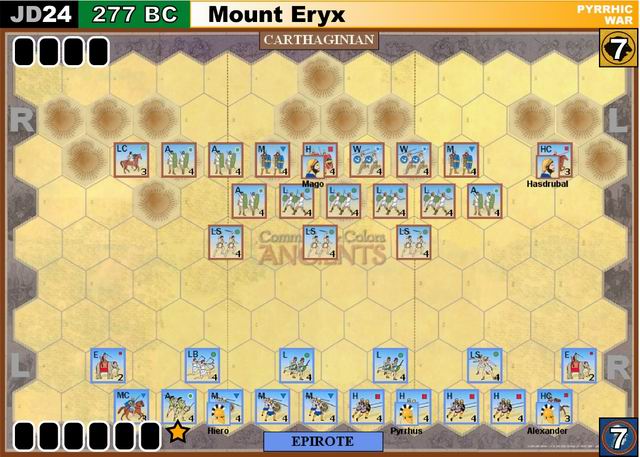