Historical Background
After the battle of Asculum, Pyrrhus left Italy for a three-year campaign in Sicily. Although he defeated the Carthaginians in every battle, he could not drive them off the island. Pyrrhus decided to return to Italy. Years of attrition and a naval defeat on his way back to Italy had greatly weakened his army. However, upon his return, his reputation brought thousands of new recruits out to join him. With 20,000 infantry, 3,000 cavalry and 20 elephants, Pyrrhus once again marched on Rome. Consul Manius Curius Dentatus gathered his army of about 20,000 foot and 2,000 horse and set up camp near Beneventum to await the Epirote army. Pyrrhus decided on a surprise night attack, but some of his detachments got lost. It was morning before he could organize his scattered forces near the Roman camp. Dentatus led his forces out and drove back Pyrrhus' vanguard. As the Roman attack continued it was in turn driven back by Pyrrhus’ skillful use of his elephants. However, a second Roman assault stampeded the elephants into the Macedonian phalanx. Dentatus struck while the phalanx was disordered and broke it, winning the battle. Pyrrhus withdrew from the field with what was left of his army and returned to Epirus, never to return to Italy. Beneventum was the final pivotal battle in the Roman Republic's bid for control of the entire Italian peninsula, and the first great victory of the legion over the phalanx.
The stage is set. The battle lines are drawn and you are in command. The rest is history. 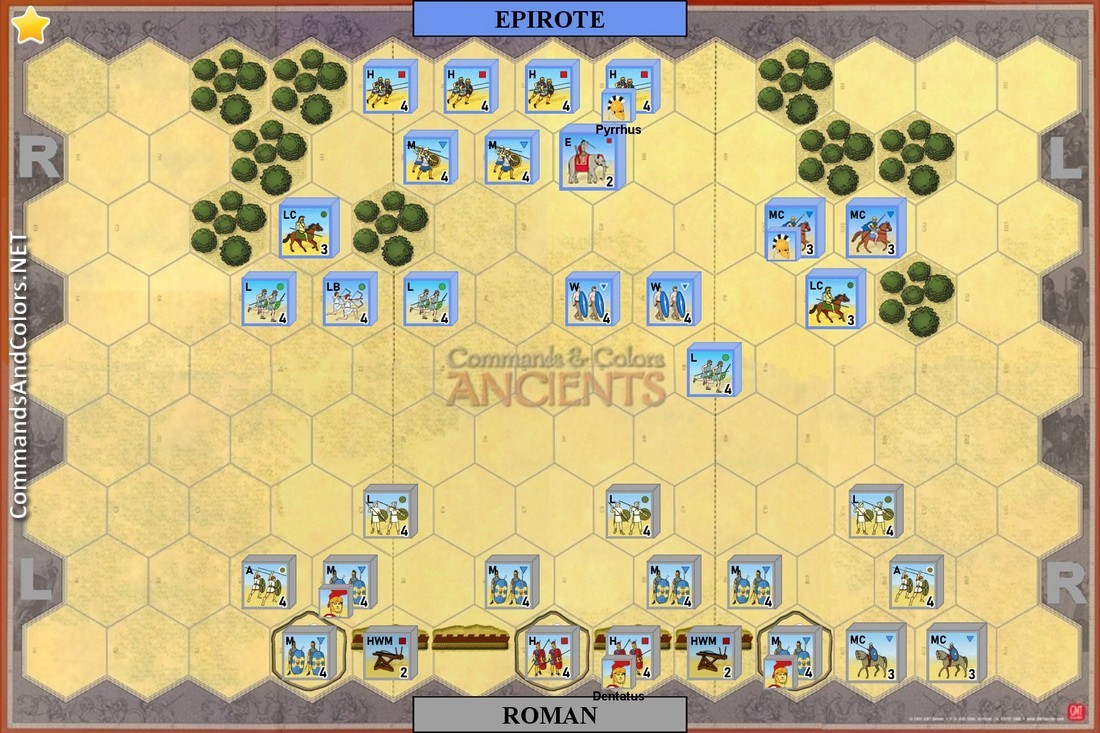 clavain replied the topic: #4064 1 year 2 months ago
7-4 Pyrrhus. Cavalry attack on the Roman right was successful, followed up by Warriors and Elephants in the centre which was very disruptive while the Roman cards were not particularly useful as he tried to sort out his lines. Last few Roman units needed for the win ground down at range, and finished off with a Darken the Skys. Very awkward setup for the Romans to recover from if the cards/dice don't go there way. Only managed piecemeal counterattacks and half a line formation which left them quite vulnerable, while cards came up good for the Epirotes
ozzie replied the topic: #1648 6 years 8 months ago
A 7-4 win to the Romans this time. Pyrrhus manages to mobilise some of his phalanx and the elephant and get them moving. He then launched a left wing attack with the medium mounted supported by the elephant and light horse and light infantry. The Roman right went down fighting and Pyrrhus attempted to sweep round the remaining Roman infantry and finish it off, but failed to score more than one hit per unit. If one Roman medium infantry or the general fallen it probably would have been all up for them. The Romans now threw caution to the wind and just advanced the weakened medium and light infantry and it paid off. Both of Pyrrhus medium cavalry fell as did the elephant and a light infantry. It was back to 4-3 to the Romans in the blink of an eye. Pyrrhus now threw in the two warband and two phalanx but rolled badly and only took down one Roman medium infantry unit. The defensive counterattack by Romans took out both a phalanx and a warband in some devastating dice rolling. 6-4 to the Romans and Pyrrhus himself was retreating from his destroyed phalanx. The damaged Roman infantry advanced on the isolated Pyrrhic phalanx and it only took one triarii heavy infantry to roll their dice and destroy it. 7-4 to the Romans and a Pyrrhic victory to them - Pyrrhus still had two intact heavy phalanxes, 2 medium infantry and a warband whilst 5 of the 7 remaining Roman medium/heavy infantry units were down to only one or two blocks. Personally, I think 7 Victory Tokens is two few for this game. In future we will try 7 heavy or medium units destroyed or 9 in total.
ozzie replied the topic: #1646 6 years 8 months ago
A 7-4 win to Pyrrhus with his phalanx and elephant sitting largely immobile for most of the game due to a lack of centre movement or Line Command cards. It ended up as a skirmish on both flanks with mounting casualties on each. Eventually the Epirote cavalry charged in and despite being destroyed they took out both Roman cavalry units and an auxiliary unit. A lone warband charged in and managed to weaken some medium foot but died in the attempt. On the Roman left the desultory skirmishing left all Pyrrhus' light infantry weakened and his light cavalry fled off the table when it was hit by 2 Retreats from shooting. The Roman medium infantry closed in on this flank to try and finish off the lights and a lone Pyrrhic medium infantry unit that had advanced unsupported. It almost worked with Pyrrhus lights fleeing to base edge to escape but the mighty medium unit inflicted one measly casualty and then double-helmeted the Roman general to redeem itself. Finally Pyrrhus played a Double Time card and one phalanx finished off both Roman medium infantry units to win the game. A close game. With the Pyrrhic heavy troops on the base edge it's a tough battle for the mighty phalanx. The Romans were actually ahead at 4-3 at one stage forcing Pyrrhic to commit piece-meal into fights rather than try and advance a phalanx or elephant unit.
Read More...