Historical Background
Pyrrhus of Epirus nearly doubled the size of his army after his victory at Heraclea with Greeks, Samnites and Lucanians flocking to his standard. After absorbing the new recruits, Pyrrhus set off towards Rome. His advance was stopped at Asculum by the two Roman Consuls Decius and Sulpicius, and their army of four legions and allies. Both sides had around 40,000 men, but Pyrrhus had the advantage in cavalry and, of course, his elephants. After a day of skirmishing in rough terrain, the two armies lined up at daybreak on level ground. What followed was a straightforward Legion versus Phalanx battle. During the battle Pyrrhus failed to envelope the Roman flanks. After a hard fight in the center, the Romans were driven back once again by his elephants. Pyrrhus, at the forefront of the fighting, was wounded, preventing him from exploiting his victory. Over 6,000 Romans had been slain, but Pyrrhus had lost 3,500 of his men, mostly irreplaceable veterans and many of his officers. Pyrrhus reportedly exclaimed after the battle “One more such victory and I shall be lost!” giving rise to the term “Pyrrhic Victory.” The path to Rome was still guarded by other armies, and the Romans refused to negotiate a peace treaty. Discouraged, Pyrrhus accepted an offer from Syracuse to lead the Sicilian Greeks in their war with Carthage in 278 BC.
The stage is set. The battle lines are drawn and you are in command. The rest is history. 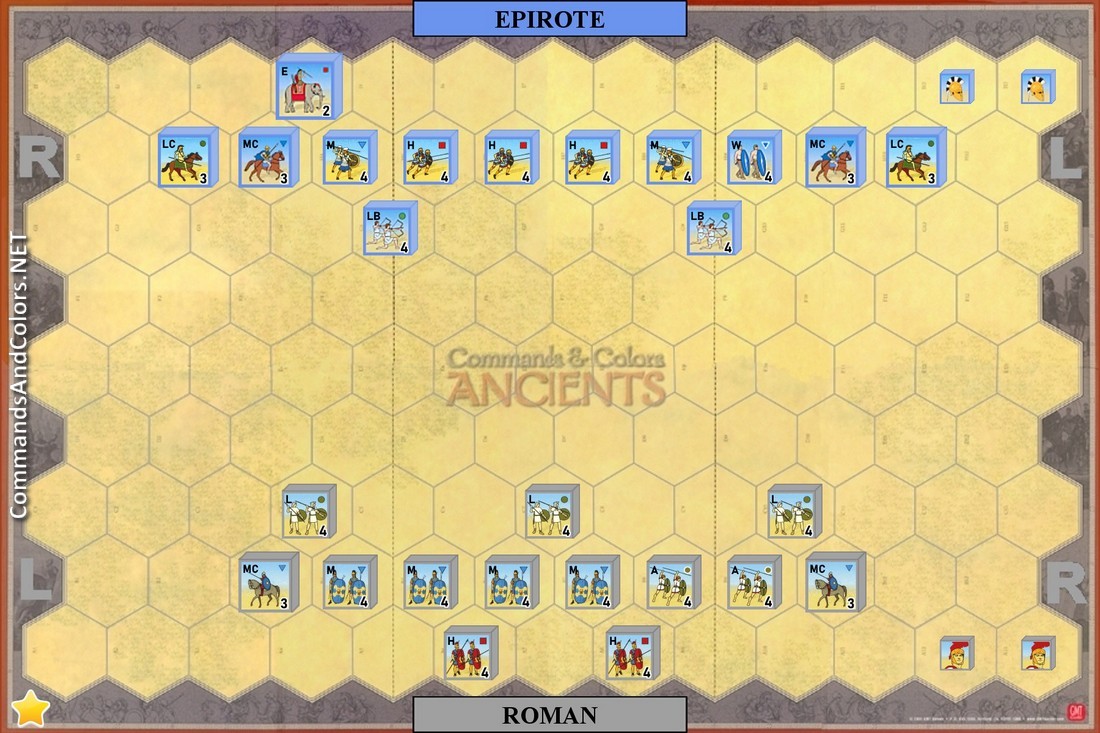 Special Rules
Each player must place two leader figures on the battlefield after each has reviewed his Command cards. The Roman player places his two leaders first—then the Epirote player.

g1ul10 replied the topic: #2948 1 year 9 months ago
I find the special rule in this scenario very interesting. I'm wondering why it is not adopted in more official scenarios.
ozzie replied the topic: #1643 4 years 8 months ago
A 7-1 victory to the Romans. Much more manoeuvring than the previous game with Pyrrhus intent on advancing his phalanx and medium infantry with the elephant in support. The Romans moved units this way & that to ensure the line was intact and Triarii moved in support. Some velites killed the elephant despite the heroic sacrifice of one unit. The Roman line went in with the triarii having replaced some medium foot who had been shot up. This was decisive. Two phalanxes and a medium foot unit were destroyed on impact, the other phalanx and medium unit left with 3 hits each - ouch. The entire line was destroyed next turn with both Roman triarii units surviving with their last block each intact. Pyrrhus was killed with his troops to complete the rout. Rome survives and the Epirote army returned to Tarantum in tatters, with most of its crack infantry dead or prisoner.
ozzie replied the topic: #1642 4 years 8 months ago
7-2 victory to Pyrrhus with the phalanx and medium infantry breaking through across the line.
Read More...