Historical Background
The 3rd Samnite war broke out over territory near Neapolis in 298 BC as the last Samnite attempt to ward off Roman domination. Rome sent two armies against Samnium led by the experienced consuls Quintus Fabius Rullianus and Publius Decius Mus, each with about 20,000 men. The Samnite army numbered 25,000 under Gellius Statius. Statius hoped to defeat each Roman army in detail and so set an ambush for Rullianus in a valley near Tifernum. Rullianus with proper scouting discovered the trap and would not enter the valley. Statius, fearing the arrival of the other Roman army if he delayed, came out of the Valley and offered battle which Rullianus duly accepted.
The battle lines clashed and the Samnites were getting the upper hand when suddenly in the Samnite rear there appeared a force of Roman Hastati, led by the Tribune Lucius Cornelius Scipio, that Rullianus had previously sent on a flanking march before the battle had begun. With both sides thinking this small detachment heralded the arrival of the army of Decius Mus, the Roman moral soared while that of the Samnites collapsed and they fled the battle. The badly shaken Romans were in no shape to pursue and so with Samnite casualties fairly low the Samnites were still in shape to continue the war.
The stage is set. The battle lines are drawn and you are in command. The rest is history. 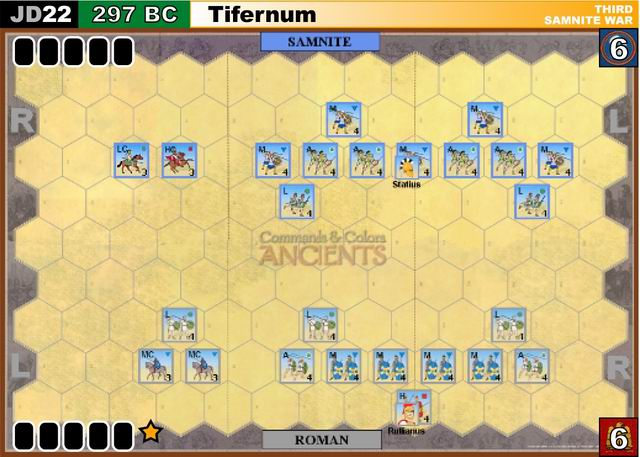 Special Rules
Beginning on the 4th Roman turn, that player rolls a dice and on a leader symbol a medium infantry unit with an attached leader (Scipio) is placed in hex I4, I8 or H12. The hex must secretly be chosen by the Roman player before play begins. The dice roll is successively increased by 1 dice on each subsequent turn with the units arriving automatically on the 9th Roman turn if they have not already arrived. Samnite units may not enter an entry hex before the said units arrive. After the units are placed the Roman player receives a victory banner and may immediatelly conduct a free Rally order but any units receiving blocks are not ordered.