Historical Background
"Disturbances in Campania caused the Samnites to concentrate their forces in Caudium, where they would be in a position to attack Capua if an opportunity occurred. The Roman consuls led a powerful army to the area and both sides camped opposite each other in the plain below the Caudine forks. When they formed up for action, the consul Sulpicius took charge of the right wing, which was very extended; the Samnites extended their left wing to match. The other consul, Poetilius, took command of the Roman left, which was stationed in close formation and reinforced with auxiliary cohorts brought forward from the rear. With these forces Poetilius forced the enemy infantry back, whereupon the Samnite cavalry on the extreme right wheeled in to the attack. As they did so, the Roman cavalry charged them at full tilt, throwing everything into confusion and forcing the enemy to flee from this part of the field. On the other flank, the fortunes were reversed and the Samnites broke through the Roman lines. The Romans, however, regained their confidence when they saw that their troops in the rest of the field were victorious. They regained the lost ground and the Samnites gave up and fled." (Taken from "Battles of the Greek and Roman worlds" by John Drogo Montagu)
The stage is set. The battle lines are drawn and you are in command. Can you change history? 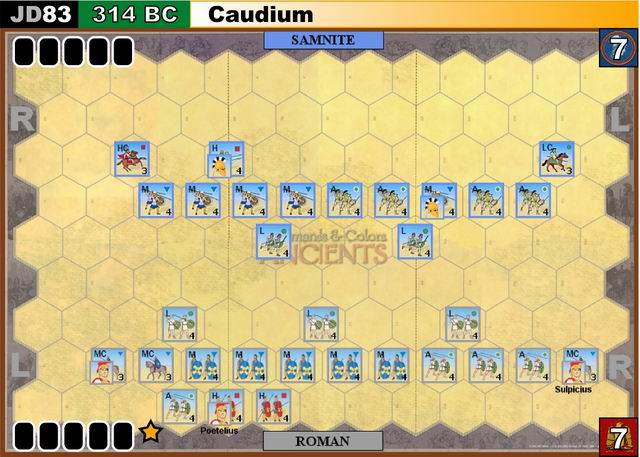