Historical Background
In 311 BC the Etruscan league saw their chance to throw off the growing dominance of Rome. They joined in the Second Samnite war against the Romans by attacking the allied Roman town of Sutrium, but their army was defeated by the consul Aemilius Barbula.
In 310 BC the Etruscans renewed their siege of Sutrium. A Roman army under the command of the consul Quintus Aemilius Rullianus was sent to lift the siege. As Rullianus was outnumbered, he set up his defence at the base of Mount Ciminius from where he could more easily fend off the Etruscan attacks. Once the Etruscans were disordered, Rullianus ordered a down slope charge, while the Roman cavalry cut off the retreat to the Etruscans camp. Thousands of Etruscans were killed as their army broke and fled into the Ciminian Forest.
The stage is set. The battle lines are drawn and you are in command. Can you change history? 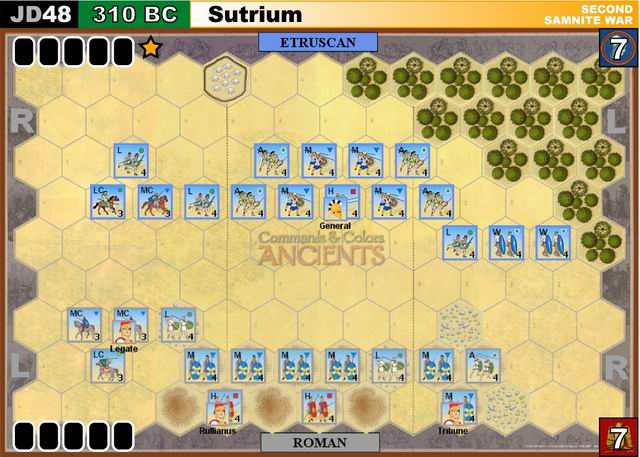 Special Rules
If a Roman unit ends its turn on the Etruscan camp tile the Roman player is awarded 1 victory banner (once only).